It was a rainy day and Josh was sitting at the kitchen table making a kite. He had some light strips of wood which he used to make the frame of the kite. He also had some blue and red and green and pink tissue paper. He covered the whole kite with blue tissue paper.

“This blue paper is the kite’s face!” decided Josh. He cut out red tissue paper to make happy smiling lips, green tissue paper for eyes, and pink tissue paper circles for cheeks. Then he made a long kite tail out of the blue, red, green and pink paper.

“Your tail looks like the clothes dancing in the wind on Gogo’s washing line,” said Josh to the kite. Then he wound a very long piece of string around a cardboard tube and tied the other end of the string to the frame of the kite, so that it wouldn’t fly away from him later when it was in the air.

“Your name is Skycatcher!” said Josh to the kite.

The next morning, Josh sat in his wheelchair outside his front door with Skycatcher in his lap. It was the right sort of day to fly a kite. He was waiting for Hope. She was going to push him along the pavement as fast as she could go, so that Skycatcher could catch the wind and fly. Where was she?

“Let’s go then!” said Hope as she held the handles at the back of the wheelchair tightly. She started to walk fast, and then to run all the way along the pavement. The wheels went bumpity-bump, bumpity-bump, picking up speed as Hope ran. Josh let a little bit of the string unwind from the cardboard tube he was holding. Suddenly the kite took off! It fluttered about in the air just above their heads.

Josh and Hope raced past Neo who was in his front garden playing with Bella. He was wearing a newspaper pirate hat and he had a cardboard sword. Bella was wearing a witch’s hat.

“Woof! Woof!” barked Noodle, but Neo wasn’t listening to him or Bella. Neo was watching Josh and Hope coming along the pavement at full speed. Then Bella forgot about their game too and she also watched Josh and Hope! 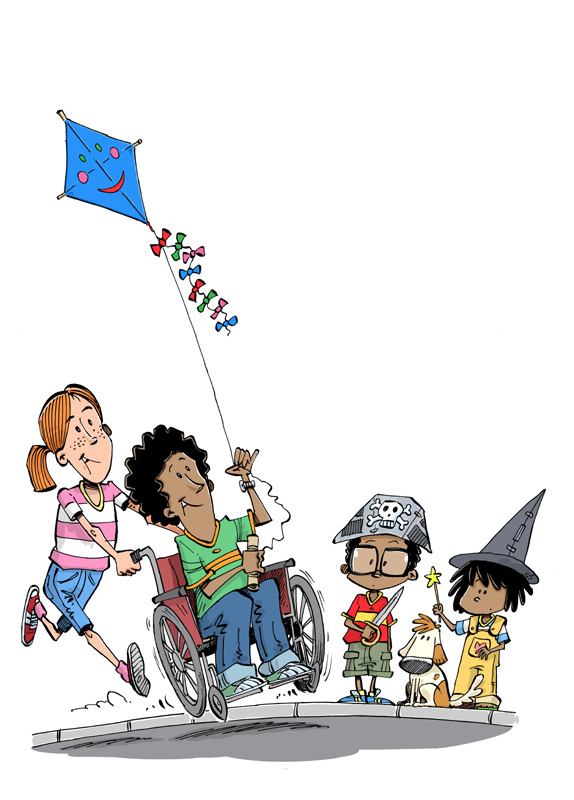 “Can we come with you?” asked Neo.

“Yes, come! We’re going to fly Skycatcher!” said Josh as he went past.

So Hope and Neo and Bella and Noodle ran in a long line behind Josh, going bumpity-bump and woof! woof! all the way along the pavement.

When they got to the field next to some houses, Josh let out some more string and Skycatcher flew higher up into the air. And then higher. It glided gently over the rooftops and treetops with the blue sky around it. Josh and Hope and Neo and Bella watched the kite and wished they were flying up in the sky with it.

“Woof! Woof!” Noodle barked loudly. He was also looking up at the kite.

“Neo, do you want to try flying the kite?” asked Josh.

“Yes please!” said Neo, and he took the cardboard tube of string from Josh. But it was windy so Skycatcher pulled hard, and Neo dropped the cardboard tube. It whizzed round and round on the ground like a live, wild thing and it let more and more string out, so that the kite flew higher and higher. Soon it was just a small speck in the sky. 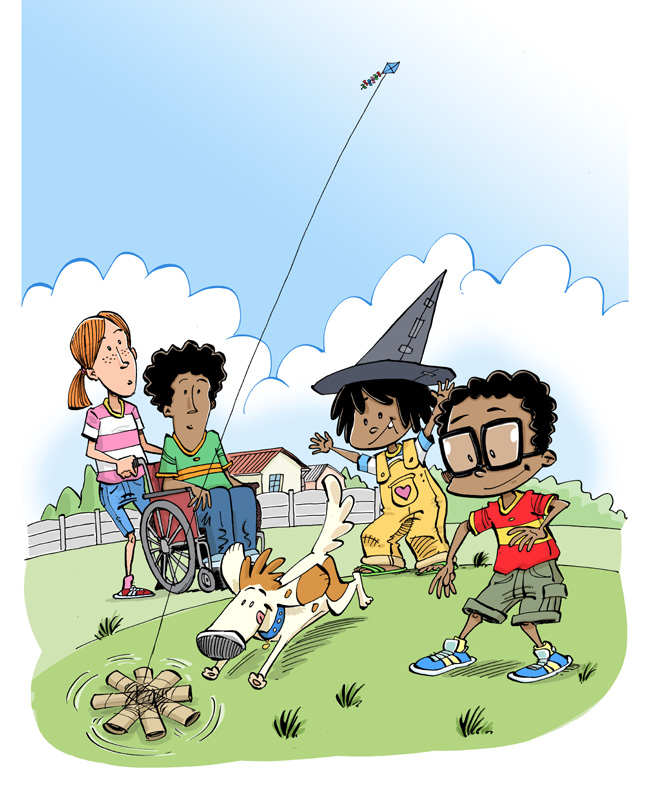 Noodle pounced on the tube of string! He held it in his jaws and under his paws so that it couldn’t spin around. Then he jumped up with his paws on Josh’s knees and passed the tube to Josh. Finally, Skycatcher stopped flying away and stayed where it was, with its bright tail waving about in the sky below it.

Josh reeled in his kite. Tighter and tighter he wound the string around the cardboard roll until Skycatcher lay still in his lap after its great adventure in the sky. Hope turned the wheelchair around, and they all went bumpity-bump and woof! woof! all the way home.

When Josh lay in bed that night, he thought about what fun he had had with his kite and how he had nearly lost it. “Luckily I have the best friends in the world!” he sighed as he closed his eyes.

* Let your children design their own kites. Ask them questions to help them get started – for example: What shape will you make your kite? What materials could you use to make it? How could you decorate it?
* Have fun with your children by blowing up balloons and then letting them go. (Don’t tie a knot at the end of the blown-up balloon.) Watch how they fly all over the place as the air escapes!
* In the story, Neo wears a hat made of newspaper. Give your children newspaper, cellotape, scissors and string and challenge them to make an object using these materials.