Why dassies have no tails

Long, long ago, animals had no tails. They were very unhappy about this, so they called a meeting at the watering hole.

Dassie watched as the animals passed by on their way to the meeting.

“Hurry up! We need to get to the meeting,” shouted Hare as she

“Don’t worry, I’ll follow you!” answered Dassie and he turned his back towards the rays of the warm sun.

“Aren’t you joining us?” asked Monkey as he passed by.

“Don’t worry, I’ll be on my way soon,” replied Dassie lying on his back to warm his tummy.

The last animal to come by was Dassie’s best friend, Tortoise. “Aren’t you coming to the meeting?” she asked.

“Only if my friend can give me a lift,” replied Dassie.

“But my shell is already heavy,” said Tortoise.

“Well, I’m not heavy. You won’t notice any difference with me on top,” said Dassie with a wide smile.

“But my shell is hard and uncomfortable to sit on,” explained Tortoise.

“I’m a dassie! I’m used to sitting on hard rocks!” replied Dassie, jumping on Tortoise’s back. Dassie was heavy, but what could Tortoise do? Dassie was her best friend.

At the meeting, the animals talked about tails.

“I look ugly without a tail,” complained Hyena.

“When I try to turn when I’m running, I fall over because I do not have a tail,” said Cheetah.

“I need an extra limb to free my hands when I swing on the trees and pick fruit,” said Monkey. 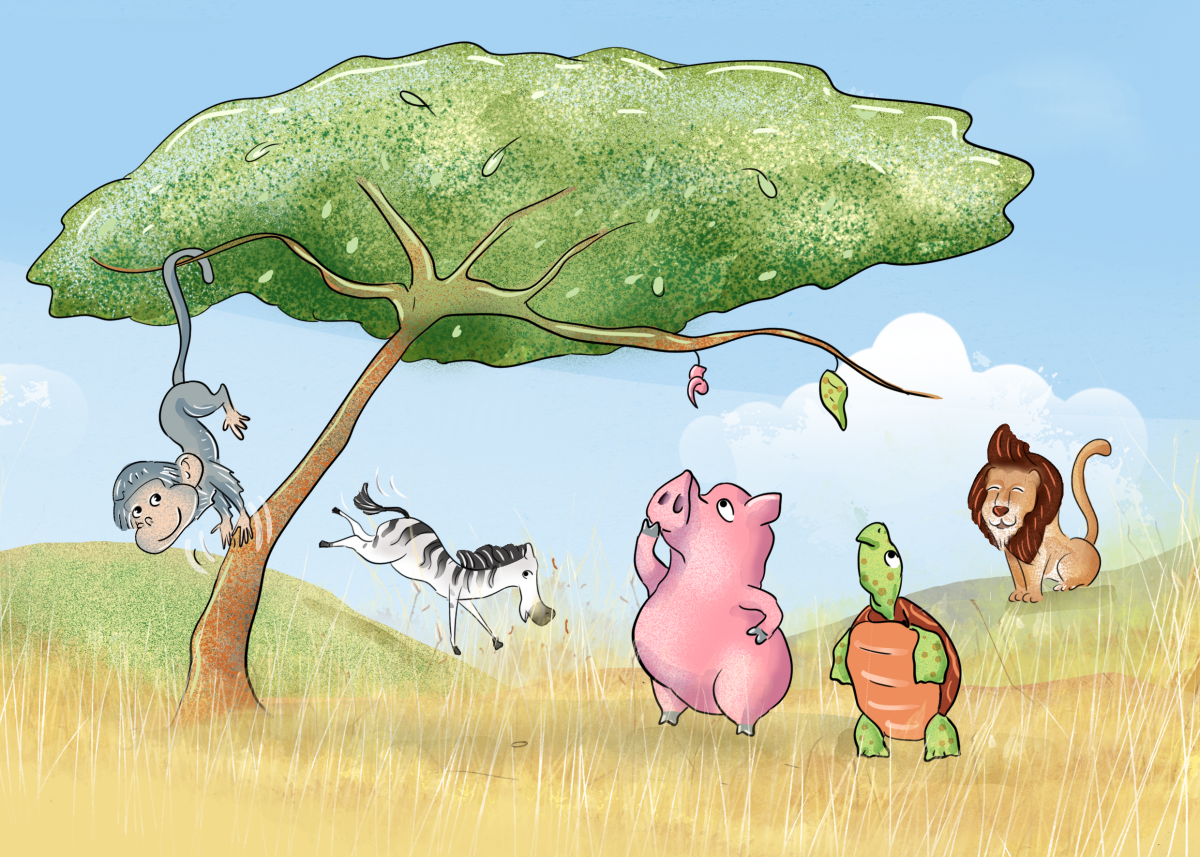 “Let’s ask the Creator to give us tails,” suggested Lion.

So, the animals turned their faces up to the sky. “Oh, Creator, please give us tails!” they pleaded.

A loud voice boomed from the sky. “Tomorrow morning, go down to the river and there you will find tails on the big tree.”

“I can’t wait to get a tail. Tomorrow, let’s go together to fetch our tails,” said Dassie as Tortoise dropped him at the rock he called ‘home’.

Knowing that she moved slowly, Tortoise woke up early the next morning. It was still dark when she left her home, and the other animals were still sleeping.

As Tortoise passed Dassie’s home, she shouted, “Come on! Let’s go and get our tails!”

“Not today. I’m feeling lazy. I’m just going to sit on this rock and enjoy the sun. Please fetch a tail for me and drop it off on your way home,” said Dassie with a wide smile. “I would love a long, bushy one.”

Tortoise was surprised that Dassie was not coming along. “Will do,” she said happily, realising that at least she would not have to carry Dassie on her back.

At dawn, the other animals made their way to the river in a large group. They were faster than Tortoise, so they passed her along the way. But Tortoise was determined to reach the tree to get a tail for herself and her friend, so she crawled on.

The animals started to move towards the tree. It was clear that whoever reached it first would have the best choice of tail. Monkey jumped from tree to tree. Lion, Cheetah and Zebra sprinted. Elephant and Rhino made a clumsy dash. Jackal trotted faster as did Pig, but Pig stopped here and there to eat some tasty grubs and roots. Tortoise followed at the back.

Monkey was first to get to the tree. She grabbed the longest tail. Cheetah was second and he took another long tail. The next animals chose tails from the ones left hanging on the tree.

When Pig and Tortoise finally arrived, there were only two tails left. One was a short, stubby tail and the other a thin, curly one. Pig chose the curly tail, so Tortoise got the chubby one.

There was nothing left on the tree, and no one had remembered that Dassie wanted a tail too. 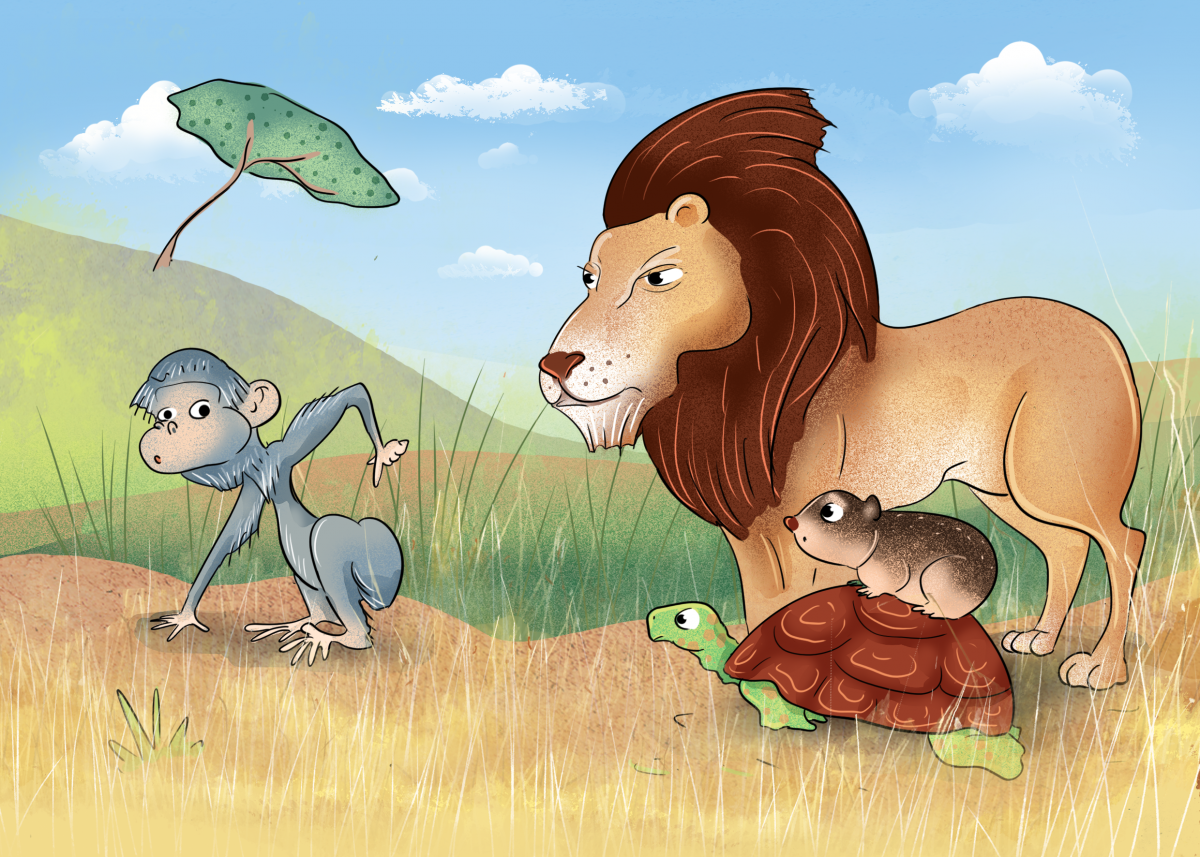 From his rock, Dassie could see the animals coming home. They walked with a swagger and swung their tails from side to side. “I cannot wait to get my new tail!” thought Dassie.

Dassie saw Tortoise and Pig walking along. “Did you bring me my tail, Tortoise?” asked Dassie as they drew nearer.

“No, I’m sorry, my friend, but they ran out! Pig and I got the last two tails. Look at my tail,” explained Tortoise, pointing to her stubby tail. “This is all I could get.”

“I should have gone myself!” said Dassie regretfully.  “I am faster than both of you. I could have got myself a really nice tail if only I had not been so lazy.” Tortoise and Pig walked away in silence.

And that’s why dassies don’t have tails – but they still sit on rocks to enjoy the warmth of the sun!

* Imagine that the animals had chosen different tails from the tree. Draw a picture of any animal with a different type of tail, such as Tortoise with a lion’s tail or a zebra with a pig’s tail.