Flossie, the field mouse, scurried through the grass as fast as her little legs could carry her. “Eish! Eish!” she gasped, “I will never get home in time!”

The sun was already setting. Dark shadows lay all around her. “Eish! Soon it will be night. And then the silver moon monster will be looking for me!”

Flossie was terrified of the moon monster. She often had nightmares about him. But now she couldn’t run any further. Her legs were hurting, her chest was aching. She was just too tired. She stopped beside an old tree and crept in amongst its roots. Would she be safe here?

“Good evening!” said a deep voice from somewhere above her.

Flossie looked up and squeaked in fright. Two round eyes were staring down at her. Two gigantic shiny eyes! Flossie’s heart beat hard and fast inside her chest. Any creature with such huge eyes must surely be very, very big!

“Who are you?” asked Flossie in a shaky voice. “Are you the moon monster?”

The deep voice laughed a furry laugh. “No, I’m not a monster. I’m just a moth. You can call me Maxwell.”

A moth!? Flossie couldn’t believe it! What kind of moth had such gigantic eyes? “Are you a giant moth?” she asked

Maxwell laughed his furry laugh again. “Hawu! Those aren’t my eyes,” he said. “Those shiny circles are just patterns on my wings. Look here!” And Maxwell flapped his wings so that Flossie could see how the shiny round patterns moved: up and down, up and down.

Maxwell scuttled down the side of the tree trunk, closer to the field mouse. It was nice to have someone to talk to. Not many creatures were out and about at night.

“Tell me,” he said. “Why were you in such a hurry? I saw you scurrying through the grass as fast as your little legs would go.”

“I was trying to get home before dark,” said Flossie. “But it’s no use now. Night is already here, and my home is still far away.” She began to cry little field mouse tears.

Flossie shook her head. “No, no! Night is a terrible time. Night is when the silver moon monster comes out and goes hunting.” 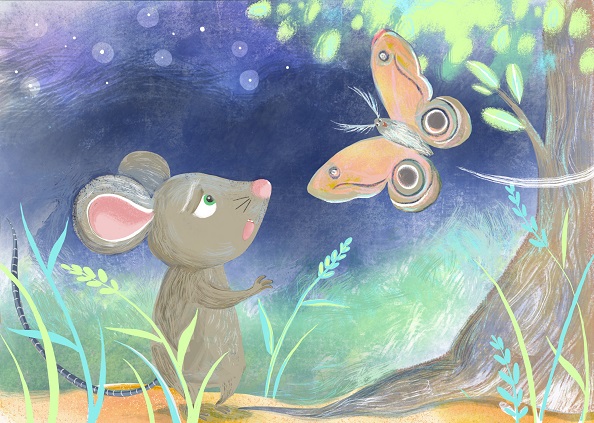 “The silver moon monster? Never heard of him!” Maxwell said.

So Flossie explained: the silver moon monster flew on silver wings that stretched out wider than a tree. He flew out from the light of the moon, his dark shadow sweeping along the ground. He flew in terrible silence; searching, searching for little mice. And then he grabbed them with his sharp talons and carried them away into the darkness – forever!

Maxwell shook his head and let out another deep, furry laugh. “Hawu! That’s not a monster! That’s just an owl. He’s not silver at all; he’s just a dull brown colour. Who’s scared of a boring old owl?”

“Ha!” said Maxwell confidently. “I’d like to see him try!”

Just then, something moved in the air above them. Flossie looked up to see a huge silver shape flying down from the light of the moon. Two huge silver wings spread wide, casting a dark shadow across the tree roots.

Flossie was too terrified to move. She closed her little eyes tightly as the whooshing sound came closer … and closer. She knew what was going to happen next. All her most terrible nightmares were about to come true.

Suddenly there was a loud, ugly screech, then a flurry of huge wings. And then silence.

“You can open your eyes now,” said Maxwell.

Flossie opened her eyes to see the owl disappearing over the treetops. 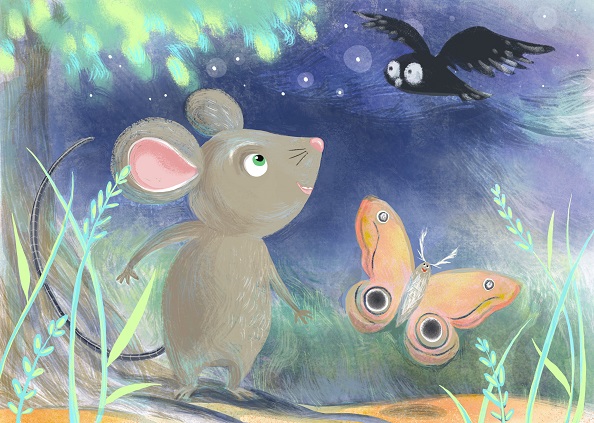 “What happened?” she asked in amazement. “Why did the moon monster fly away?”

Maxwell was very pleased with himself. “It’s the patterns on my wings. The owl thought they were eyes – just like you did. And just like you, he thought anyone with such gigantic eyes must be a huge creature. He got quite a fright, let me tell you! Did you hear how he screeched?”

“Yes, I am, aren’t I?” agreed Maxwell. “Now you just sleep here close to me. You’ll be safe until sunrise.”

So Flossie snuggled up amongst the roots of the tree. Soon she was fast asleep. And she didn’t dream about the silver moon monster at all. Not once.

* Use toilet rolls, paper, glue, toothpicks and paint or crayons to make a moth. Cut out the shape of the moth’s wings, colour them and, when they are dry, glue them to the toilet roll. Paint the toothpicks black and attach them to the moth to create its feelers.