Jabu was a very adventurous boy. He lived in a small village in the Eastern Cape with his grandmother, grandfather, aunties, uncles and many cousins. Although Jabu often played with his cousins and friends, what he loved most, was to go on adventures in the bush around his home. 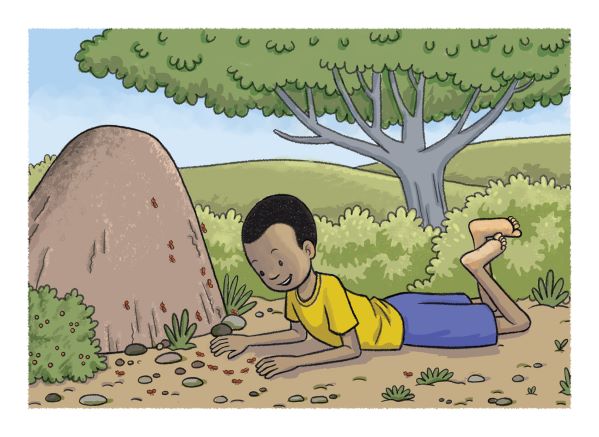 Jabu had a wonderful time in the bush every day, but it always made him sad that he would not be able to share his adventures with his parents.

Jabu’s mother and father lived in Mossel Bay in the Western Cape. They phoned every week, but Jabu usually got only a few minutes to speak to them because everyone wanted a turn.

“Give me the phone. I need to ask Aunty something,” one cousin would say.

“I have an important message for your father,” an uncle would call out.

When it was his turn to speak to his parents, Jabu would have so many things to say that he would end up freezing on the phone, not knowing which story to tell.

Then, one week, his teacher, Mrs Nako, told the class about a wonderful book called a diary.

“A diary is a book with many pages to write on,” said Mrs Nako to the class. “It is special because each page is for one day of the year from January to December. You can use it to write important things that happened during your day. You can also make a note of certain days, like your birthday, so that you can remember to do things on that day.”

“This is what I need!” he thought happily. “I need a diary so that I can write down all my adventures. Then I can sit down and decide which adventures I want to tell my parents about the next time they phone!”

Immediately after class, Jabu ran to Mrs Nako and asked her if she had a diary, even an old one, that he could use.

Luckily, Mrs Nako had brought some small diaries to class in case some of the students wanted them. Jabu was very happy. “Thank you, Mrs Nako. You don’t know how important this is for me!” he
said smiling.

His new diary was small enough to fit in his pocket, so he could carry it everywhere. It was blue and had a ribbon inside. Mrs Nako said he could use the ribbon as a marker to mark the page he wanted to
turn to.

“Gogo, look at my new diary!” Jabu called out from the gate as he arrived home from school. He was so excited that he did not see the big puddle of mud right in front of him. He stepped right into it and fell down with a big splash! Everyone laughed and laughed – even Jabu started laughing at himself.

“Hawu, Jabu,” said Gogo, “I told you that you must slow down when you are excited. Now you are covered in muddy water! But luckily your new diary didn’t get wet.” 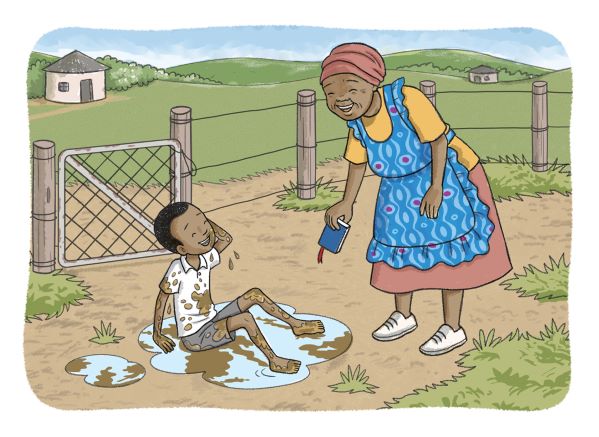 “I know, Gogo,” said Jabu as he picked himself up. “But this is the first adventure I am going to write about in my diary!”

When Jabu was all cleaned up and resting after supper, he sat down near Gogo and started to write.

After a few days, Jabu was very happy because he had written down many adventures in his new diary. He put the ribbon marker on the story of how he had fallen in the mud puddle.

“I like this story, Gogo,” said Jabu. “This story helps me remember the day I got my diary. And my writing skills are also getting better, Gogo, because I write every day!”

“That is very good, Jabu,” Gogo said, smiling at him. “Now, fetch your diary because your parents will phone soon.”

Jabu took the diary out of his pocket. He felt happy and excited because he finally knew exactly what he was going to say when it was his turn to talk on the phone!