All the animals knew that Crocodile had a big pile of gold in her house, but none of them had ever seen it because Crocodile was nasty and mean. She would chase them away and bite them with her sharp teeth. One hot day in summer, Monkey was out walking by the river when he saw Crocodile lying in the sunshine. Monkey, who was very naughty, picked up a stick and poked Crocodile on the side of her body. Crocodile didn’t move, so Monkey poked her again. 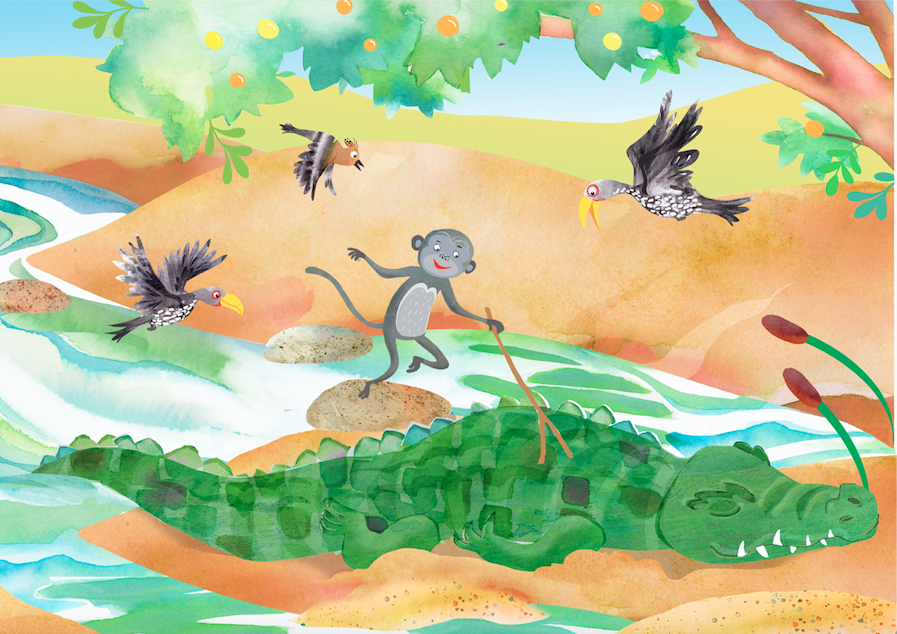 “She must be dead,” said Monkey. He ran off to tell the other animals. All the animals arrived to have a funeral for Crocodile. They stood around her body and talked. They wanted to know who would get Crocodile’s big pile of gold. They all wanted the gold, of course, but the law of the bushveld said that the gold belonged to Crocodile’s relatives. And that was the problem – nobody knew who Crocodile’s living relatives were. So wise Tortoise called a big meeting on the river bank to find out.

First, the birds, with their colorful feathers and beautiful voices, stood up to speak. “We must be the living relatives of our dear mother Crocodile,” they sang together. “Even though Crocodile was not as beautiful as we are, she laid big eggs in the sand. We deserve her big pile of gold.” The other animals shouted, “NOOO!” and the birds sat down.

“Oh no, that’s not true,” said the leader of the lizards. “Just look at her lying there. She has four legs. Show me a fish with four legs.” “But she swam,” said the fish. “Wait!” said Springbok. “Crocodile has four legs. Everyone in the buck clan has four legs too, so she must have been a buck. We deserve the big pile of gold.” “But you don’t lay eggs,” sang the birds. The fish popped out of the river and sprayed water on the birds. The birds took off into the sky and flapped around.“Why did you do that?” asked one of the birds. “If you really are Crocodile’s relatives, then you would love water,” said the fish. “Besides, did you ever see Crocodile fly?”

And soon all the animals of the bushveld were fighting amongst themselves and shouting. “Stop, everybody! Stop!” said Tortoise, but no one would listen to him. Suddenly, Tortoise felt a tap on his shoulder and turned around. Something terrible was looking down at him. It had great big eyes and very sharp teeth. It was Crocodile! “I thought you were dead,” said Tortoise, shaking in his shell. “I was sleeping,” said Crocodile in her big voice. “But all this noise woke me up.” Tortoise mumbled an apology and scuttled off into the bushveld. Crocodile turned to the other animals. “Hey!” she shouted. Everyone stopped fighting and was silent. They looked at Crocodile with wide eyes. 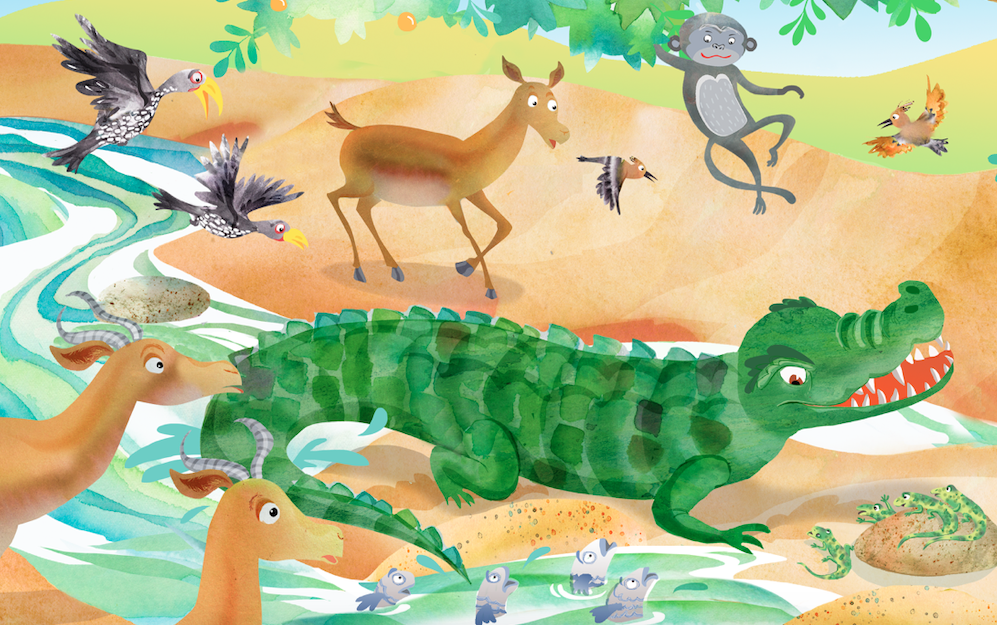 “That’s better,” said Crocodile. “So you all want my gold, do you? Well, firstly, I would like to have dinner with my living relatives. So who wants to stay and eat something delicious?” asked Crocodile licking her lips. “The birds are your relatives,” said the fish, swimming away quickly. “Oh, no, the buck are,” said the birds flying off into the treetops. “They have four legs.” But the buck clan had already disappeared into the bushes. “Well,” said the lizards, “that leaves only us. Oh please, don’t gobble us up, Crocodile.” “Gobble you up?” said Crocodile smiling. “Why would I eat my own relatives? Come on, lizards. Let’s go and have dinner.”

So the lizards followed Crocodile to her hut, where they ate marula cake and drank delicious spring water, and told jokes and laughed until it was dark outside. And from that day on, all the animals knew that the lizards were the true living relatives of Crocodile, and that when she did actually die, they would get her big pile of gold.