Why the bat flies at night

Once upon a time, many, many moons ago, there was a bush rat called Legotlo. Legotlo was a close friend of Mamanthwane – the bat. The two of them were always together. But Mamanthwane was jealous of Legotlo. Legotlo had many friends and everyone liked him more than the bat. Legotlo also had a wife who loved him very much. The bat was jealous of all these things that Legotlo had.

Legotlo and Mamanthwane always ate together. When the bat cooked, the food was always very good. “How is it that when you make the soup it is so tasty?” asked the bush rat. “I always boil myself in the water, and my flesh is sweet. That’s what makes the soup so good,” explained the bat. But he was lying. Mamanthwane offered to show the bush rat how it was done. He got a pot of warm water that was not hot enough to burn anyone, but he told Legotlo that the water was boiling hot. Then Mamanthwane jumped into the pot and quickly got out again. When Mamanthwane served the soup, it tasted as good as usual. Legotlo was amazed. The bat’s trick really does work, he thought. 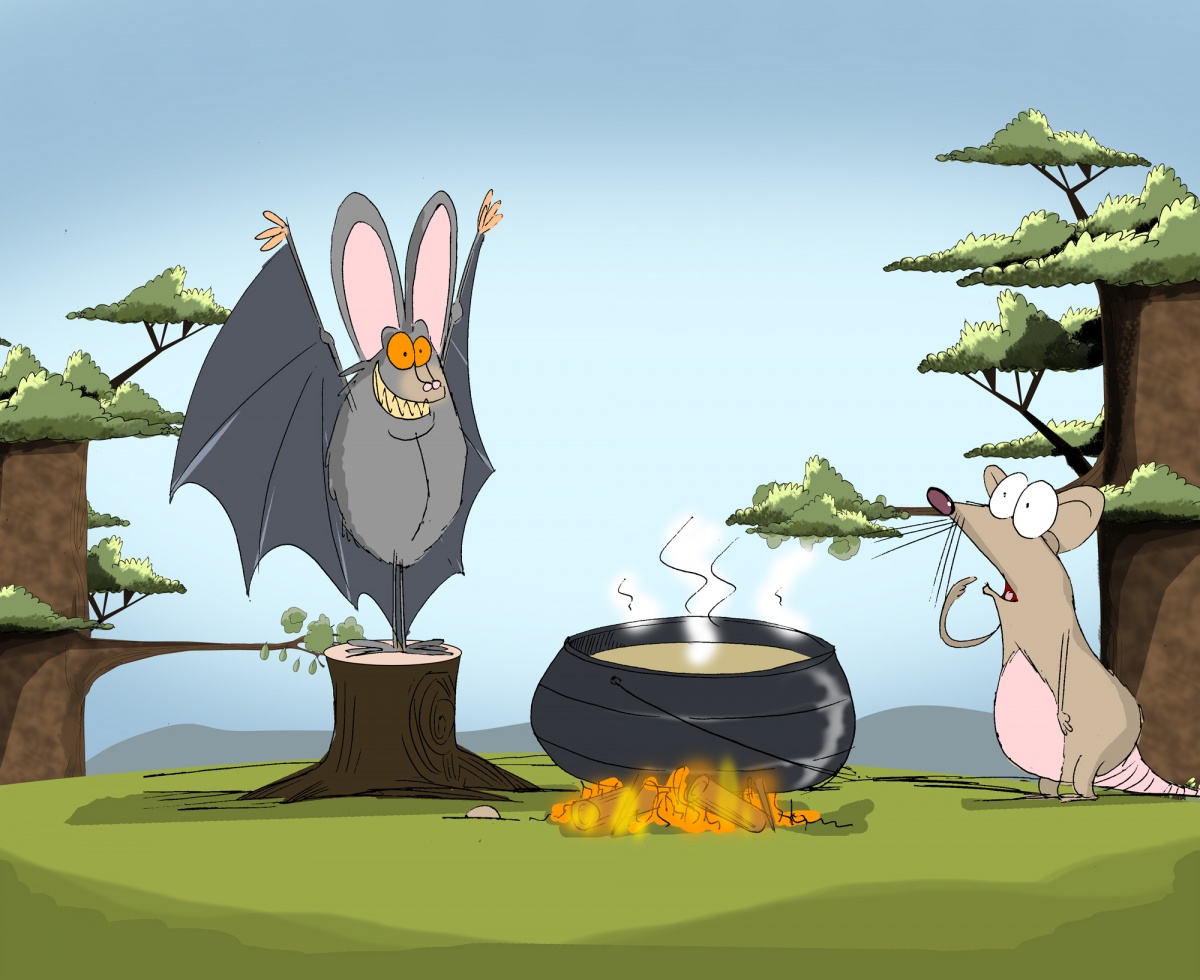 After they had finished eating, the bush rat went home and told his wife that he was going to make good soup just like the bat’s. His wife asked how he was going to do that. “It’s a secret!” said Legotlo. Legotlo asked his wife to boil some water, which she did. When his wife was not looking, Legotlo jumped into the pot. Soon he was boiling in the water!

The bush rat’s wife rushed to pull him out, but the damage had already been done. Legotlo was so badly burned that he had lost all his fur. His skin was red and pink from the hot water.

“Why would you get into a pot of boiling water?” his wife asked.

When Legotlo’s wife looked at him and saw how injured he was, she cried. She took him to the doctor, but the doctor wasn’t able to help him. Instead, the doctor said that Legotlo would never grow fur again. When Legotlo’s wife heard this sad news, she was very angry! She reported the matter to the king and queen. They ordered all the people of the village to find the bat so that he could be punished.

Everyone turned up to search for the bat. But Mamanthwane had already heard about what was going to happen so he had flown away into the bush and hidden himself. The people of the village looked and looked, but they couldn’t find him anywhere. The next day, the people of the village made their way into the bush to see if they could find Mamanthwane there. They were right – they found Mamanthwane hiding there in a tree. They waited until he was asleep, then they caught him and took him straight to the king and queen. When they arrived at the royal house, Legotlo and his wife were already there. Mamanthwane was ashamed to look his friend, Legotlo, in the eye.

“Why would you do this to me? We were best friends!” Legotlo said to the bat.

“Because I was jealous of you,” answered Mamanthwane. “You have everything that I don’t have and everyone loves you and hates me.”

The people of the village were shocked at Mamanthwane’s response. They wondered why Mamanthwane hadn’t just asked his friend how he had managed to get everyone to love him. Then the king said, “Well, you have just given everyone a reason to hate you even more.” The king and queen ordered the guards to take Mamanthwane to jail. The queen said, “Today we will lock you up! Tomorrow we will decide how to punish you!”

The next morning when the guards came to fetch Mamanthwane from his jail cell, he was not there. He had escaped and no one knew how. Legotlo and his wife were furious when they heard the news. The king and queen were also very angry. They ordered the people in the village to search for the bat again. All day long the people tried to find and catch Mamanthwane, but they failed. Mamanthwane had found a cave far away from the village that no one knew about. The cave was hard to find. Mamanthwane also decided to change one of his habits – from that day, he only came out to feed when it was dark. 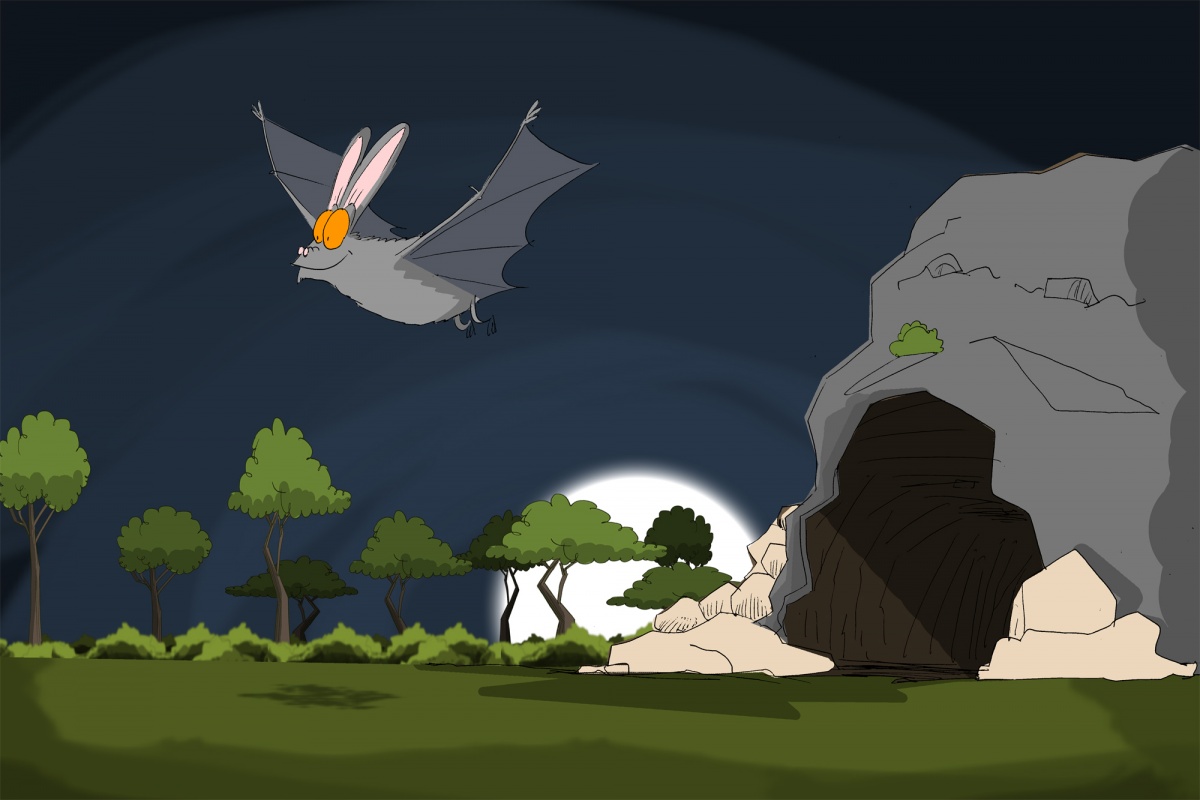 And so, that is why even today, you will never see Mamanthwane, the bat, during the day. Only at night will you see him flying around.