The girl who accidentally went to space

Lesedi loved the stars. While other children couldn’t wait for it to be morning, she couldn’t wait for night-time. She wasn’t scared of the dark at all. She loved to go outside before bedtime just to look up at the night sky.

Now, imagine all the stars she saw. Hundreds and hundreds of bright, twinkling stars and the big, round, yellow moon.

But Lesedi wasn’t ready to go inside. She wanted to count the stars. “One, two, three, four …” Lesedi had counted up to one hundred and thirty-three when she heard her mother call again.

As she turned to go indoors, she noticed a huge, bright light in the sky. It was coming closer and closer. It was a giant spaceship! Lesedi did not take her eyes off it and watched as it landed right there in her front garden.

Lesedi walked over to the spaceship and touched it. It was smooth and shiny and felt warm. A big door on the side suddenly opened and a ramp lowered to the ground.

“Maybe I can just have a quick look inside,” thought Lesedi.

Slowly, she walked up the ramp. There were bright lights and red and blue buttons everywhere. But it was the giant orange button just below one of the windows that grabbed her attention.

“I wonder what will happen if I press that?” she said aloud.

BEEP went the button as she pressed it. Then the door slammed closed and a there was a loud BOOM as the engine started up. Next, she heard a voice over a speaker say, “Spaceship launching in 3, 2, 1…”

Lesedi felt the spaceship move! It shook from left to right; it shook up and down, and then it lifted off with a bang.

“Mama is going to be so cross,” thought Lesedi, but she had a big smile on her face. She was finally going to space! Through the spaceship windows, she could see her house getting smaller and smaller as they flew upwards.

Up, up, up went the spaceship. It weaved in and around the stars. It looped round and round the planets and soared further and further into space. “Wait until I tell Tshepo and Amina about this at school,” she thought.

Lesedi was still looking out of the window when she saw something up ahead. Could it be…? Yes, it was! It was the moon … and there was a man standing on it. He seemed to be waving at her.

“It’s the man on the moon!” shrieked Lesedi with excitement. 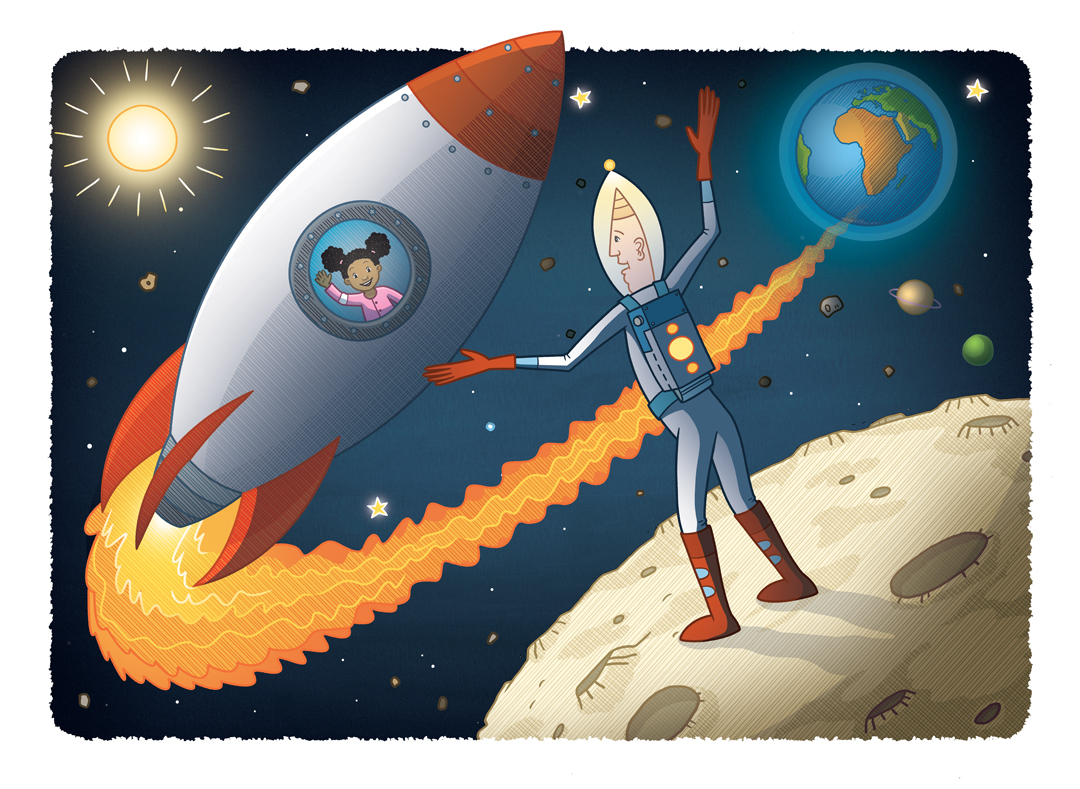 The man kept waving until the spaceship landed on the moon with a soft thump. Then he walked over and knocked on Lesedi’s window.

“Hello,” he said through the glass. “I don’t get many visitors. What’s your name?”

“I’m Lesedi,” she said proudly. “I’m not supposed to be here. This isn’t my spaceship. It landed in our garden, so I got in and then it took off!”

“That must be because you are a born explorer,” said the man.

“I am. I love space and I especially love stars. In fact, my name, Lesedi, means light,” she said.

“That’s wonderful! Here’s something to take home with you.” Lesedi opened the window and held out her hand. The man gave her a small rock. “It’s a special moon rock. Now you have something that will help you always to remember your adventure.”

“Thank you so much, Man on the moon!”

Even though Lesedi was enjoying her adventure, she was starting to feel a bit tired. “Goodness! Mama is going to be worried about me!” she thought, yawning. She looked around. “Maybe if I press that orange button again, the spaceship will take me back home.”

So she pressed it. Immediately, a voice came through the speaker again, saying, “Return journey beginning in 3,2,1…”

“Goodbye, Lesedi. I hope I see you again,” he said, waving to her.

The spaceship lifted off the moon and slowly turned around. Lesedi could see Planet Earth far below. It looked like the blue bouncing ball she and her friends loved to play with. Then she felt the spaceship whoosh down, down, down, until it landed in her garden with a bump. The door opened, and the ramp came down.

She ran down the ramp and looked up at the big, round, yellow moon, and thought that she saw a tiny man waving.

When Lesedi’s mother came outside looking for her, she found her daughter lying fast asleep on the grass.

“Oh my little girl, you must have been so tired,” she said picking her up.

She carried Lesedi inside and tucked her into bed. Then she felt something in Lesedi’s hand. It was a round, grey stone.

Then she switched off the light and left the room, not noticing that the round, grey stone was glowing in the dark.