A little village stood at the edge of a forest. In the heart of this forest, in the highest branches of an enormous tree, lived a very special bird − the bird that made rain. The villagers had always taken the time to keep this bird happy. Every week they would take pieces of bread and fruit, and fresh coconut milk to lay at the base of the tree. Then someone would play a simple tune on the thumb piano and the bird would fly down to the ground to eat and drink. When it had finished, it would raise its dark, shiny blue wings and sing a beautiful song. Within minutes, rain would begin to fall.

For many years rain fell regularly, the crops grew abundantly and there was plenty of food for everyone. But gradually things began to change … the villagers started to neglect the rain bird. “It will rain anyway,” they decided.

But gradually the rain stopped falling. Their crops began to die and their animals grew thin and weak. But still nobody went into the forest to feed the bird that brought the rain – they were all too busy trying to find money to buy food in a neighbouring town. 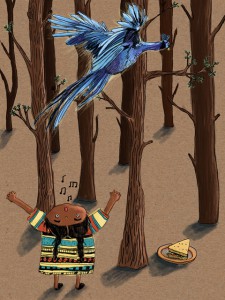 One day, Ketti went into the forest. She walked and walked until she came to the tall tree in which the rain bird lived. Ketti stared up at the tree, remembering how her granny used to take her into the forest to feed the bird. She took a piece of bread out of her bag and laid it at the base of the tree. Then, because she had no thumb piano, she sang a song.

The rain bird swooped down and began to eat the bread. When it had finished, it sang a few high notes and raised its shiny wings. Then Ketti heard the rumble of thunder and by the time she reached home, giant rain drops were pelting down.

Ketti told her parents what had happened. “Nobody believes in that bird anymore! Don’t waste your bread on it!” scolded her mother.

“If only Granny were alive,” thought Ketti, “she would have believed me!” But Ketti’s granny had died a few years ago leaving Ketti only her old thumb piano.

Two weeks passed but there was no more rain. “I don’t care what they say!” thought Ketti. “We need rain. I’m going to feed the bird again tomorrow!”

Early the next morning, Ketti took a slice of bread and a handful of red berries from the kitchen and made her way to the centre of the forest. But she didn’t know that her father was also awake. He realised what his daughter was going to do. “I’ll teach that disobedient child a lesson!” he said to himself angrily. He snatched his bow and arrows and silently followed Ketti into the forest.

Just as the bird flew down to eat the food that Ketti had set out for it, her father raised his bow and released its deadly arrow. The arrow flew straight into the bird’s heart and it let out a piercing shriek. Terrified, Ketti spun around and saw her father fall to the ground − dead. Looking back at the bird, she saw the arrow fall harmlessly from its body. Then the bird swooped up into the tree.

With a pounding heart, Ketti raced home. Every animal and person she saw on her way lay dead on the ground. At home, she quickly found her granny’s old thumb piano. “This is my only hope!” she thought. “The rain bird is angry. I have to make her happy again!”

Ketti ran back to the big tree. With trembling hands, she began to play the thumb piano. She played and played, until her fingers hurt. Finally, the bird swooped down, ate some berries and sang a few notes. Then, as Ketti played on, it raised its wings … Ketti heard a rustle behind her − her father was alive! “I’m sorry!” he said again and again to the big, blue bird. Then he held out his hand to his daughter and they walked back to the village, where all the people and animals were alive again.

That night the villagers held a meeting. They agreed that they had learned a valuable lesson. And from that day onwards, every week one of them makes a special trip to the forest to feed the bird that brings the rain.