Prince Sugar and Awande, the baker

“Nobody eats my cakes! Understand, Mary? That is the law!” said Prince Sugar to the royal baker. “The cakes, biscuits and tarts all belong to me and me alone.”

One day, a mysterious new baker arrived in the village. She started handing out slices of cake and biscuits to all the children. When Prince Sugar heard about this, he became very angry and sent his guards to arrest the baker and bring her to him.

“How dare you enter my village and start giving out treats to the children. It is against the law!” shouted Prince Sugar angrily.

“Your Highness, I apologise sincerely. Please allow me to fix my mistake by baking for you alone,” replied the baker, whose name was Awande. “I will bake you a new treat every day. These treats I bake are very special. You have to eat the whole treat within a day.”

“Of course, I’ll be able to finish a treat every day!” said the Prince greedily.

So, every morning, Prince Sugar received a freshly baked treat, which he gobbled up. As the days passed, the treats seemed to be tastier and bigger. Prince Sugar was very happy, and he finished all these delicious cakes, biscuits and tarts without sharing even a tiny piece with the village children. 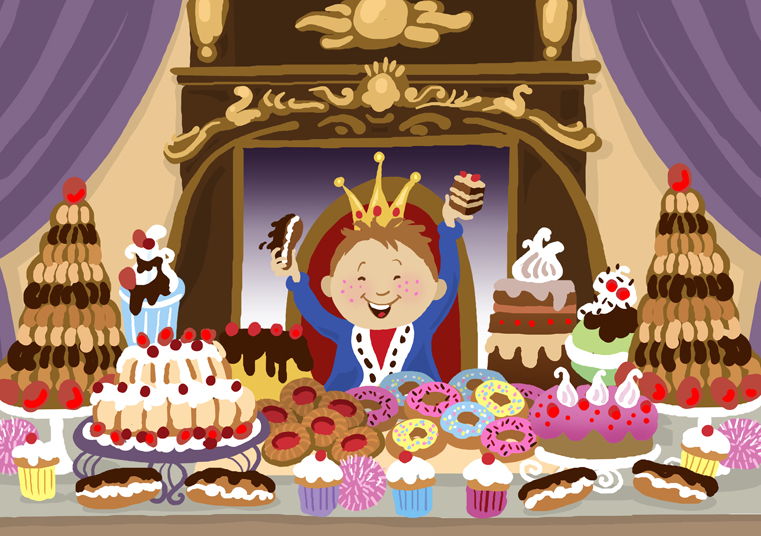 But as the treats grew bigger and bigger, Prince Sugar found that he could no longer finish them. He had to store them in a secret part of the palace so that Awande wouldn’t know that he wasn’t finishing a treat every day.

After a few weeks, Prince Sugar had had to store so many treats that no more would fit into the secret place. So, he called his servants and Mary, the royal baker, and ordered them to throw away some of the treats.

“Make sure that Awande doesn’t see you doing this,” he commanded.

So, the next morning Mary and the servants carried the leftover treats deep into the forest behind the palace. But a mysterious thing happened: that night, while everyone slept, all the treats that had been thrown in the forest reappeared in the palace!

The next morning, Awande, the baker, arrived with a fresh sweet treat and demanded to see Prince Sugar.

“Did you think I would not know if you threw my treats away? Did you not agree to eat the whole treat that I sent by the end of the same day? I warned you in the beginning that my treats were special and that you would have to finish each one,” said Awande angrily.

Prince Sugar started to feel a little afraid and his stomach felt a little sick, but he ate and ate until he had finished the leftover treats plus the one that Awande had brought that day.

“I no longer enjoy the treats,” said Prince Sugar the next morning when Awande arrived with the treat of the day.

“A promise is a promise, your Highness,” said Awande. 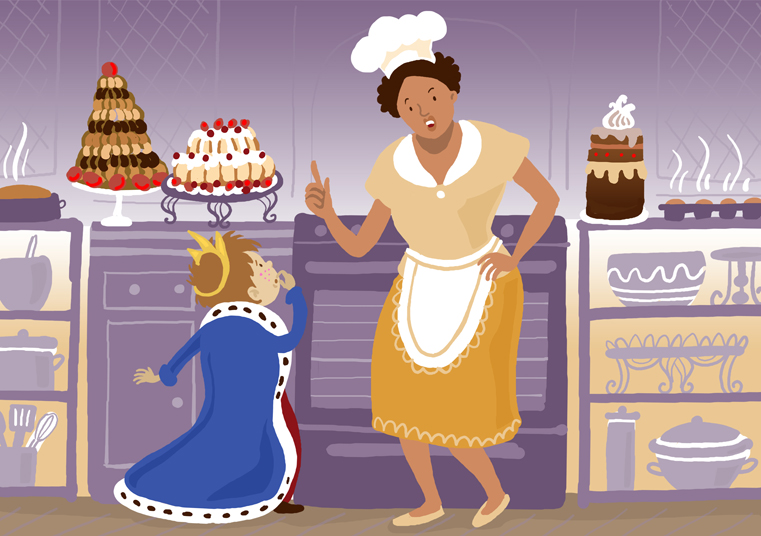 The prince looked sad. “What can I do to stop you from baking treats for me every day?” asked Prince Sugar.

“You are called Prince Sugar because you love sweet things. Yet, because of your laws, other children don’t know sweetness,” replied Awande. “So, you must eat and eat the treats, until the children’s mouths are sweet.” With that, the baker turned around and walked out of the palace, leaving a big, tasty cake for Prince Sugar to eat.

Prince Sugar thought and thought about what Awande had said but he did not understand. How could the children’s mouths be sweet if he was the only one eating Awande’s treats? So, the prince went for a walk in the garden where it was quiet. He had to think of a way to stop Awande from bringing sweet treats to him every day.

As he was walking along, a soccer ball flew over the high garden wall and landed in in the bushes. Next a scruffy little boy appeared over the wall to fetch the ball. When he saw Prince Sugar, he nearly fell over with fright.

“Your Highness, I am so sorry. I just came to get the ball back,” said the terrified boy.

Prince Sugar was so busy thinking of a plan to stop getting sweet treats that he forgot to be angry.

“Before you fetch your ball,” he said, “please tell me what would make your mouth sweet.”

“Things made with sugar, your Highness,” said the little boy shyly. “Cakes and doughnuts and biscuits – all the things we are not allowed to eat.”

The little boy looked so sad when he said this that Prince Sugar suddenly felt ashamed. For the first time, he saw how selfish he had been. He had so many treats that he no longer enjoyed them, but the village children had not tasted anything sweet for a very, very long time.

The prince hurried back into the palace and sent for Awande.

“Awande,” he said, “I’ve been selfish and silly. I would like to have a party for the people of the village. Please bake your treats for the children and their parents too. From today, everyone may eat sweet things if they wish to.”

Awande smiled. “With pleasure, your Highness!” she said, and she baked the fanciest and most delicious cakes, biscuits and tarts that the village people had even seen or tasted. And they ate and ate until they were satisfied.

The following morning, Awande, the baker, had disappeared without a trace. Prince Sugar continued to hold parties for the people of the village – but now he and Mary did the baking themselves.