The lark and the pomegranate tree

Every morning, just as the sun was beginning to rise, a little lark flew from its nest, perched on a branch of a pomegranate tree, stretched its wings, lifted its head and began to sing the most beautiful song to welcome the morning light. 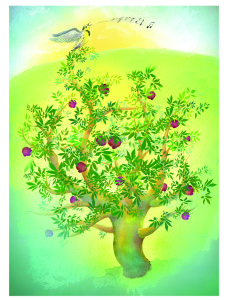 One morning, just as the bird had finished singing, it looked down and saw a large, ripe pomegranate lying on the ground. The pomegranate must have split open when it hit the ground, for its bright seeds lay scattered about like rich red rubies glinting in the sun.

The lark flew down and began to peck the juicy seeds. As it lifted its head to sing its delight at finding such a delicious meal, one of the pomegranate seeds got stuck in its throat. The lark got such a fright that it flew up into the morning sky.

High in the sky, with a cough and a sneeze, the lark spat out the seed. The seed fell to the earth where it landed on a rock on the side of a mountain.

The lark flew away unharmed, but the seed lay wedged in a crevice in the rock. It lay there for a many years before it began to sprout. There was no soil for it to grow in, and it was only watered once in a while by a passing shower.

Then one day, after a thunderstorm, the seed began to send out tiny, tender shoots, searching for anything to help it grow. After a long time it managed to get a good grip in the crevices of the rock, and then nothing could shift it.

Time passed. The seasons followed one upon the other. The delicate shoots gradually became roots strong enough to reach deeper and deeper into the cracks and crevices, eventually splitting the rock into pieces, while its branches reached for the sky.

And so the tree grew.

Birds nested in its branches and fed on its fruit − which fell to the ground or was scattered over the earth to fall where it may and wait for the rain to soften the ground upon which it lay.