“Oh no!” gasped Motlatsi and Tshepo as their black and red kite landed on Mrs Ntshona’s roof winding itself around the TV aerial.

“Quick! We must pull it loose!” shouted Tshepo.

Motlatsi grabbed the string and tugged. To his horror, the TV aerial that was already old, bent over until it almost touched the tiles on their neighbour’s roof. 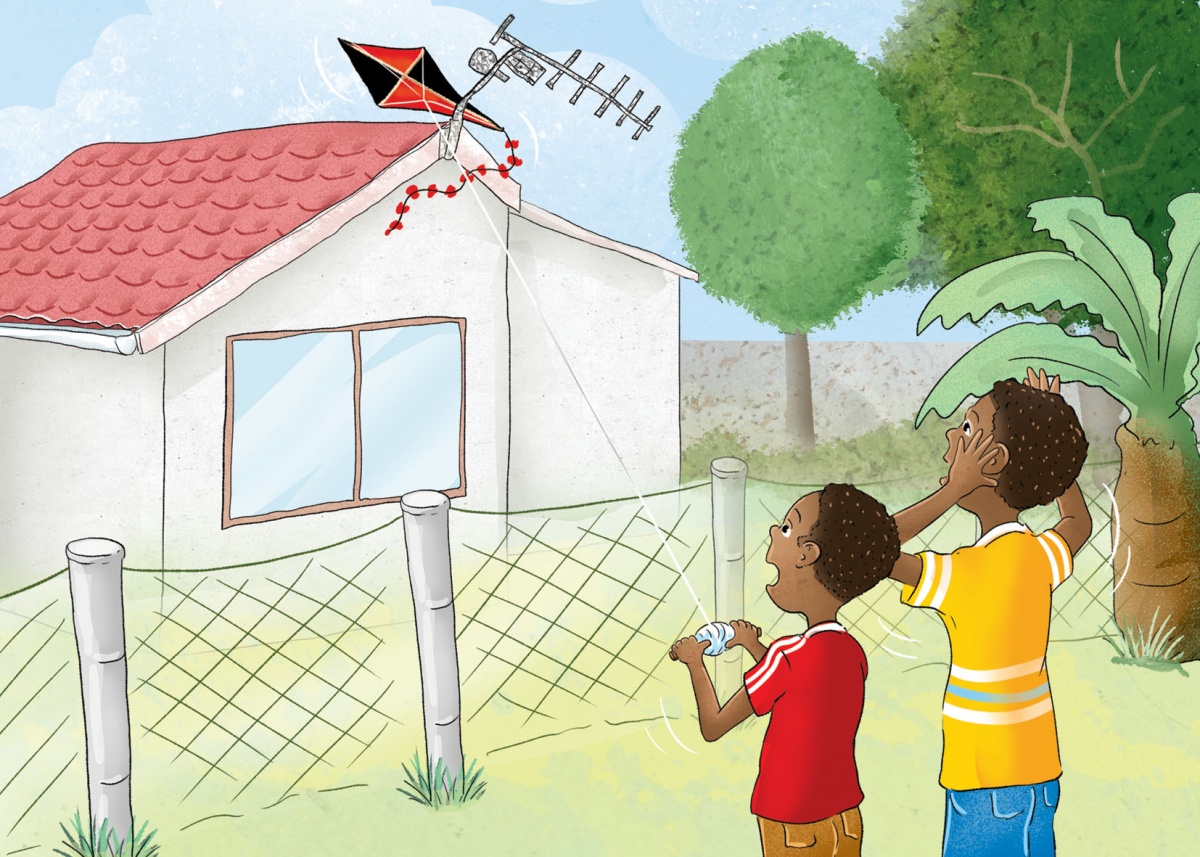 “Dad will be so angry!” Tshepo cried, covering his face with his hands.

“Not half as angry as Mrs Ntshona!” Motlatsi replied. He grabbed his brother and ducked behind the garage. “Look! There she is!”

Sure enough, Mrs Ntshona stood outside her kitchen door with her hands on her hips. The boys could see that she was angry. She looked up at the roof and saw the bent aerial. Her eyes widened. She shook her head. Her two eyebrows came together in the middle of her face. She tapped her foot on the floor. Her lips were one straight line.

“Dad told us to fly the kite only in the park and we promised we would!” whispered Tshepo to his brother.

“We’re in big trouble now,” agreed Motlatsi. “We didn’t listen to him! What do you think he will do?” His foot kicked the dust.

“Maybe Dad will take away our kite,” replied Tshepo, “or he won’t give us money to buy sweets again.” He stared into his brother’s eyes.

A look of disappointment passed over Motlatsi’s face. “Yikes! What else?”

“We broke our promise. A promise is forever.” Tshepo sat down and put his head in his hands.

“So what happens now?” asked Motlatsi as he bit his nails.

“What does that mean, Tshepo? What is trust?” ask Motlatsi.

“Ssh! Not so loud! Mrs Ntshona will hear us! I think it means that he won’t believe us when we tell him something,” Tshepo whispered.

“You mean like when I said that I passed Maths at school?” asked Motlatsi, sweating.

“No, he believed that because he read your school report,” said Tshepo.

“You mean like if I tell him I ate ice-cream for lunch?” suggested Motlatsi, trying to understand.

Tshepo shook his head. “Not exactly,” he said. “It has to be something important.”

“Like when I lost the two rand he gave me?” asked Motlatsi. “I told him it dropped out of my pocket.”

“He knew that was true because you had a hole in your pocket,” explained Tshepo.

“What then? Does it mean Dad will go away and never come back? Or will he send us away?” asked Motlatsi, about to cry.

Tshepo and Motlatsi peered around the corner of the garage. They saw Mrs Ntshona look at her cellphone. She was about to make a call.

“She’s going to phone Dad! Oh no! How can we stop her?” said Motlatsi. He was about to run away when Tshepo took a risk. He stepped out, straight into danger!

“Hello, Mrs Ntshona,” said Tshepo walking towards the fence. “I’m so sorry about your aerial.”

Mrs Ntshona looked him up and down with her lips pinched shut. She was breathing fast. “A new aerial costs money you know, Tshepo. Perhaps you must find work and buy me a new one!” Her voice rang out loud as a bell.

“My dad gives us pocket money,” said Motlatsi coming up to stand beside his brother. “We will use our pocket money to buy you a new aerial.” He wished he hadn’t said that, but he knew he had to.

“Really?” said Mrs Ntshona as her voice rose higher. “When do you get pocket money and how much?”

“We each get five rand a week,” they whispered together, backing away a little.

“That’s ten rand a week. We can save up …” said Tshepo, his voice trailing off. It could take a long time to pay for a new aerial and Dad would find out what had happened.

The brothers were so busy looking at each other helplessly that they forgot about Mrs Ntshona. When they looked at her again, they were surprised. Mrs Ntshona had a look on her face that was soft and dreamy.

The boys held their breath.

“Children, I had a kite once. It was grey and pink. I stood in the garden of my grandfather’s house in Lesotho holding its string. It rose high into the sky. It looked so happy. I let it go. I watched it sail higher and higher until I couldn’t see it anymore.”

She smiled at the boys. “It’s okay, Tshepo and Motlatsi. I won’t tell your father. That old aerial was useless anyway. I needed to buy a new one. I’ll get the ladder and you can climb up and get your kite.” 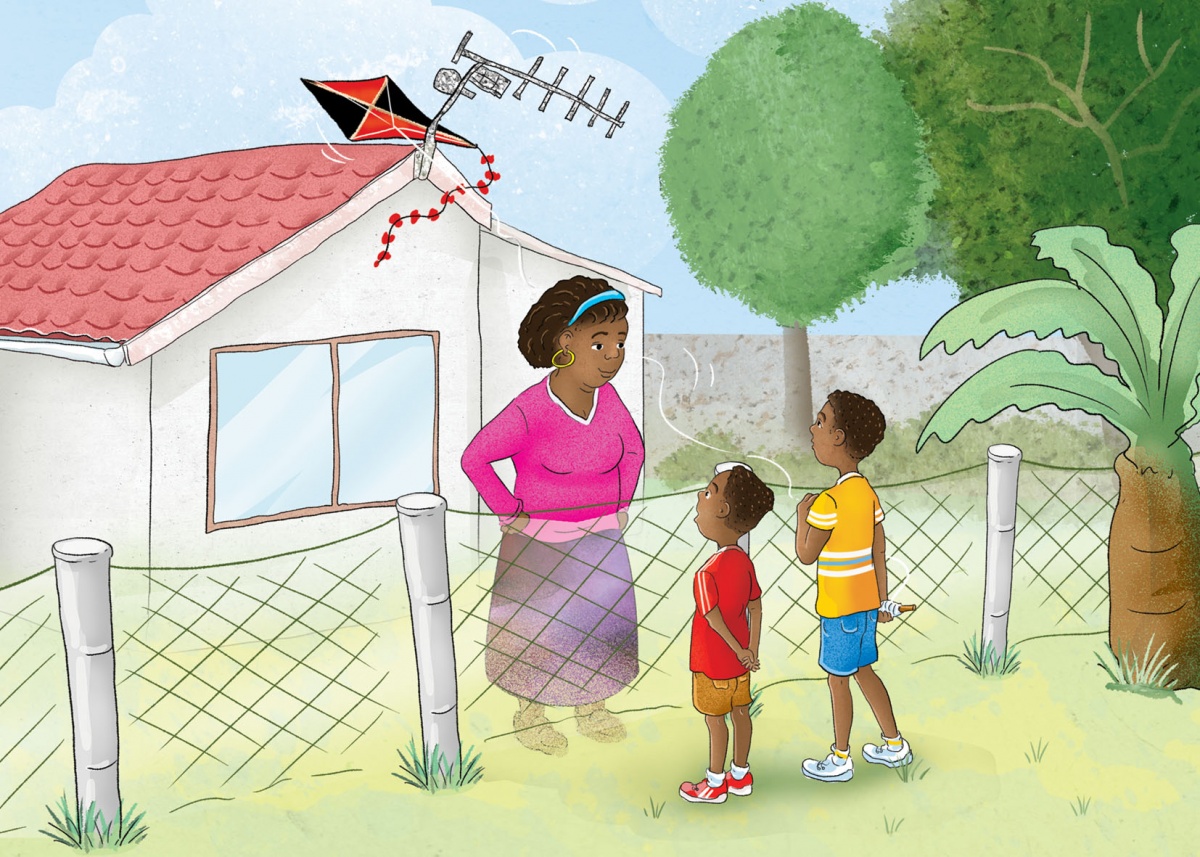 As she walked away the brothers heard her say, “I might even have some hot chocolate and cake in the kitchen when you come down!”

The boys just looked at each other and smiled.