Once upon a time, Hen, together with her three little chicks, shared a field with Cow.

Cow loved grazing as she walked all the way across the field to visit her friend, Hen. But times were hard. The rain had come late this year, and there was very little grass. Cow was very hungry as she plodded slowly over to Hen’s coop. The farmer had forgotten to buy hay.

Hen was happy to see Cow. “Hello, my friend,” said Hen. “Let me bring you some cool, fresh water to drink. You must be thirsty after your long walk.” Then Hen rushed off to fetch some water for Cow to drink.

As Cow was lying in the shade of a big, old thorn tree, the three little chicks were playing around her. They were plump and yellow, just like the blooms of the tabebuia tree that Cow sometimes saw in springtime.

Cow’s tummy growled and rumbled as she watched the chicks playing. She raised her head and looked over her shoulder guiltily. First right, then left and then right again. There was still no sign of Hen.

Now, cows don’t usually eat meat, but remember, anything can happen! Cow was so hungry that before she could think, she jumped up and started chasing after the little balls of yellow plumpness! 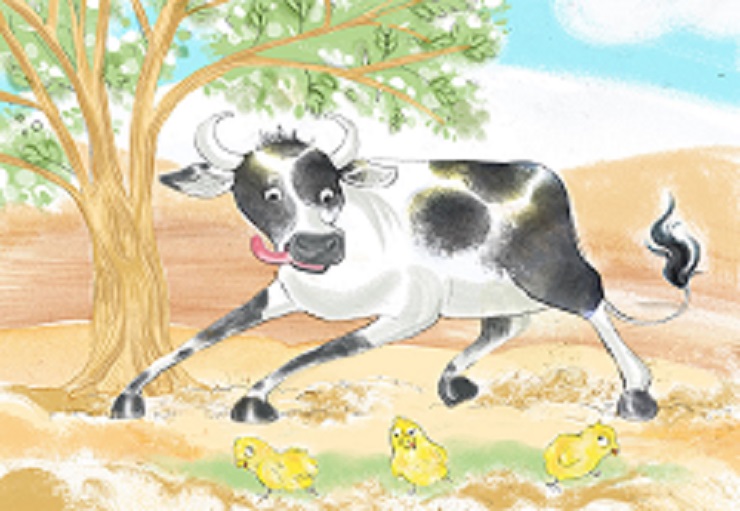 Just then, Hen returned with some water for Cow. She looked at the dust clouds hanging around her baby chicks.

“What’s going on?” Hen asked, smiling at the three chicks.

“Cow is playing catch with us,” peeped the chicks, falling over each other, legs in the air.

“But she is too slow,” they cheeped. Then they jumped up and ran through Cow’s legs to show how fast they were.

“Don’t tire out our friend,” Hen clucked at her brood before walking away to fetch more refreshments for Cow.

By the time Hen returned, Cow’s tongue was hanging out of her mouth, and in one big gulp, she swallowed the water Hen had placed in front of her.

“They are always under one’s feet. So playful,” said Hen. “But at least I know they are safe from the falcon, who is always watching from afar.” Hen nervously looked up at the sky and then smiled at Cow. “Thank you for keeping an eye on them while I was gone,” she told her friend.

Cow knew that this was not what had really happened, and although she felt bad, she only nodded tiredly. By now, she was faint with hunger. Running around after the chicks had used up all her energy.

After some time, Cow got up and said goodbye to Hen, wondering whether she would even be able to make the long walk back to her shed.

Cow stumbled into the shed just as the evening shadows started to stretch out on the floor. She was relieved to see a big pile of hay brought in by the farmer. And once she started eating, she couldn’t stop. She ate and ate and ate until she was so full that she floated right up to the moon like a big, patchy balloon. Because remember, anything can happen! 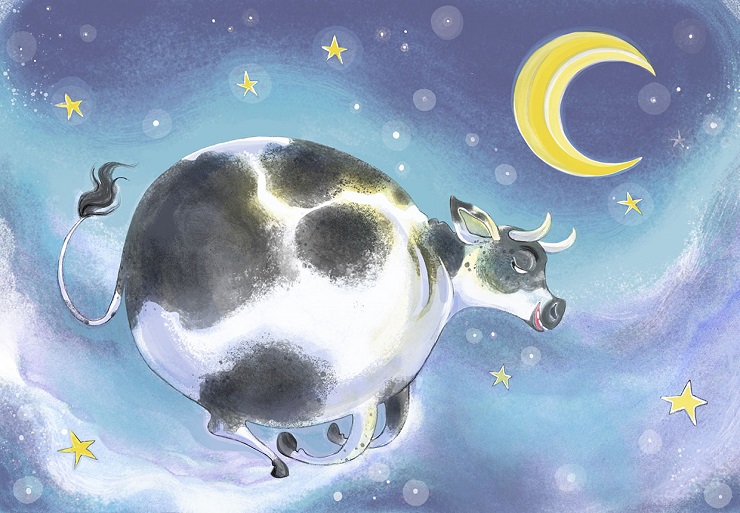