Timi and the barber

Timi and his mother lived in Mozala Town. There was something very unusual about Timi – his hair! It grew very quickly. It grew so quickly that every Saturday, Timi’s mother had to take him to the barber to have his hair cut. And if there was one thing that Timi really didn’t like, it was having his hair cut! Haircut time was worry time for Mom because Timi would cry. “I don’t want to have my hair cut!” he always said. 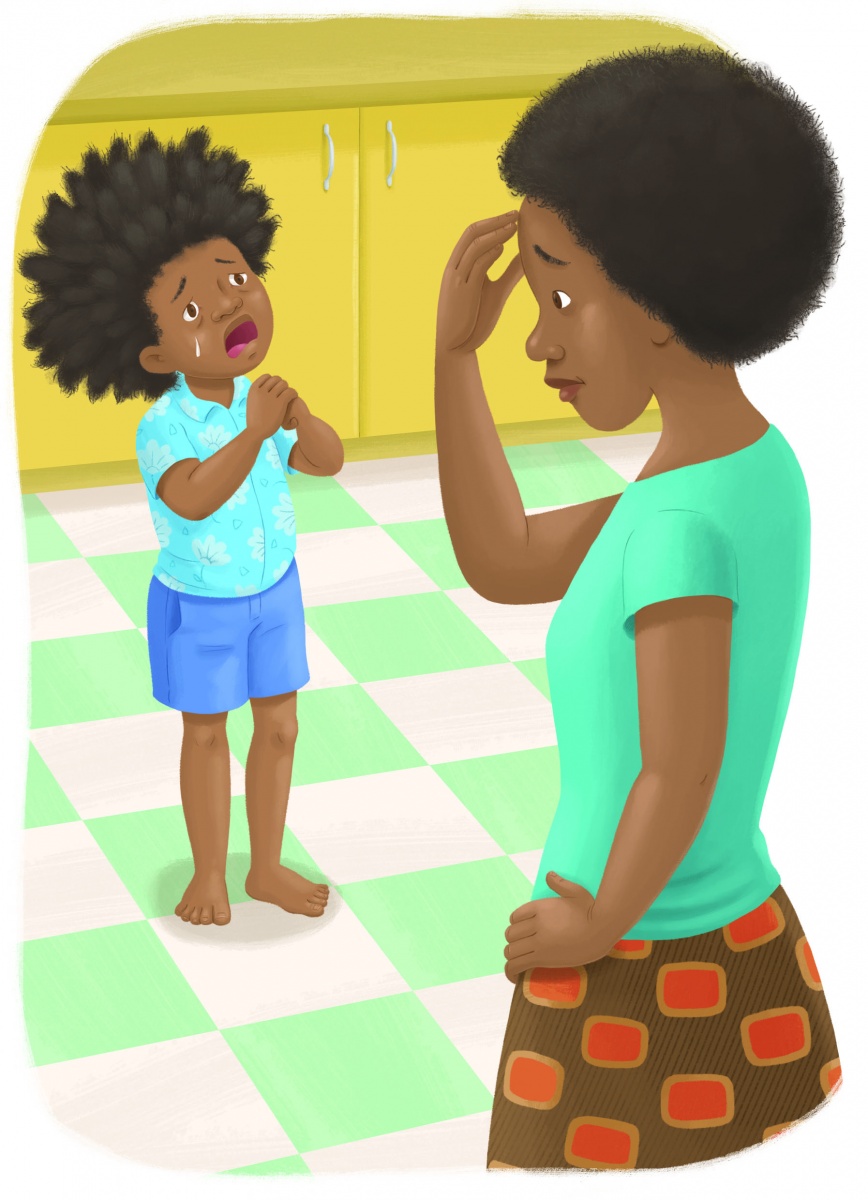 Mom would cuddle him before they set off to the barbershop, but as soon as they arrived, Timi would burst into tears. Then Mom would have to do all sorts of things to try to get Timi to sit still while he was having his hair cut. Sometimes she would give him some biscuits. Timi loved biscuits, but he would gobble them down and start crying again. Sometimes Mom would break into a dance. She would dance to the left. She would dance to the right. She would shake her body, but Timi just cried and cried.

As soon as Jango, the barber, got ready to cut Timi’s hair, Timi got ready to cry even more! First, he would sniffle, then he would sob, and then he would let out a loud cry, “Hiyaa, hiyaa, hiyaa!” “It’s only a haircut, Timi. It’s not painful,” Jango would say, trying to calm Timi down, but that made Timi cry even louder. Sometimes Jango would sing to comfort Timi, but still Timi kept crying. One day, Timi cried so loudly that some passers-by peeped into the barbershop to see what would make a boy cry so loudly! “Oh, my goodness! It is only a young boy having his hair cut,” they said. Timi did not care that people came to stare at him. He cried and cried until Jango had finished cutting his hair. Another day, he wailed so loudly that Grandma Binite came limping in with her walking stick. She lived next door to the barbershop, but had been woken up from her afternoon nap by Timi’s loud wails.

“Oh, my word!” Grandma Binite said. “I thought something terrible was going on!” Then she limped back to her house to get Timi a piece of tasty grilled fish she had made. “I’m sure this will make him stop crying,” she thought. But when she gave Timi the fish, he popped it into his mouth, chewed and swallowed … and then went on crying! After Timi had left with his mother that day, Jango sat down with a cup of tea and thought and thought. Surely there had to be a way to stop Timi from crying while his hair was being cut! And that’s when Jango had his good idea! “That’s it! I’ve solved it,” he shouted excitedly. On Timi’s next visit, as soon as Jango took out his scissors, he began to tell Timi a story.

“Once there was a young boy who did not like to get his hair cut, so he let it grow and grow,” said Jango. “It grew until his head was full of knotty strands of hair. Soon the knotty strands became twisted together.” “What happened next?” asked Timi, who had stopped crying. “Flies and other insects decided to make their homes in his hair,” continued Jango. “So, what happened to him?” asked Timi, looking worried. “The young boy began to pull at his hair and to scratch because the insects that were crawling around on his head made it very, very itchy. He pulled and scratched, and pulled and scratched all day long. Soon, his head and his hands began to hurt from all the pulling and scratching,” said Jango. “Oh, how awful! What happened next?” asked Timi, feeling sorry for the boy. “His head and hands became swollen,” continued Jango. “One day, his mom brought him to my shop. As soon as they got here, he hopped on the chair to have his haircut. He sat still so that I could give him the best haircut ever.” 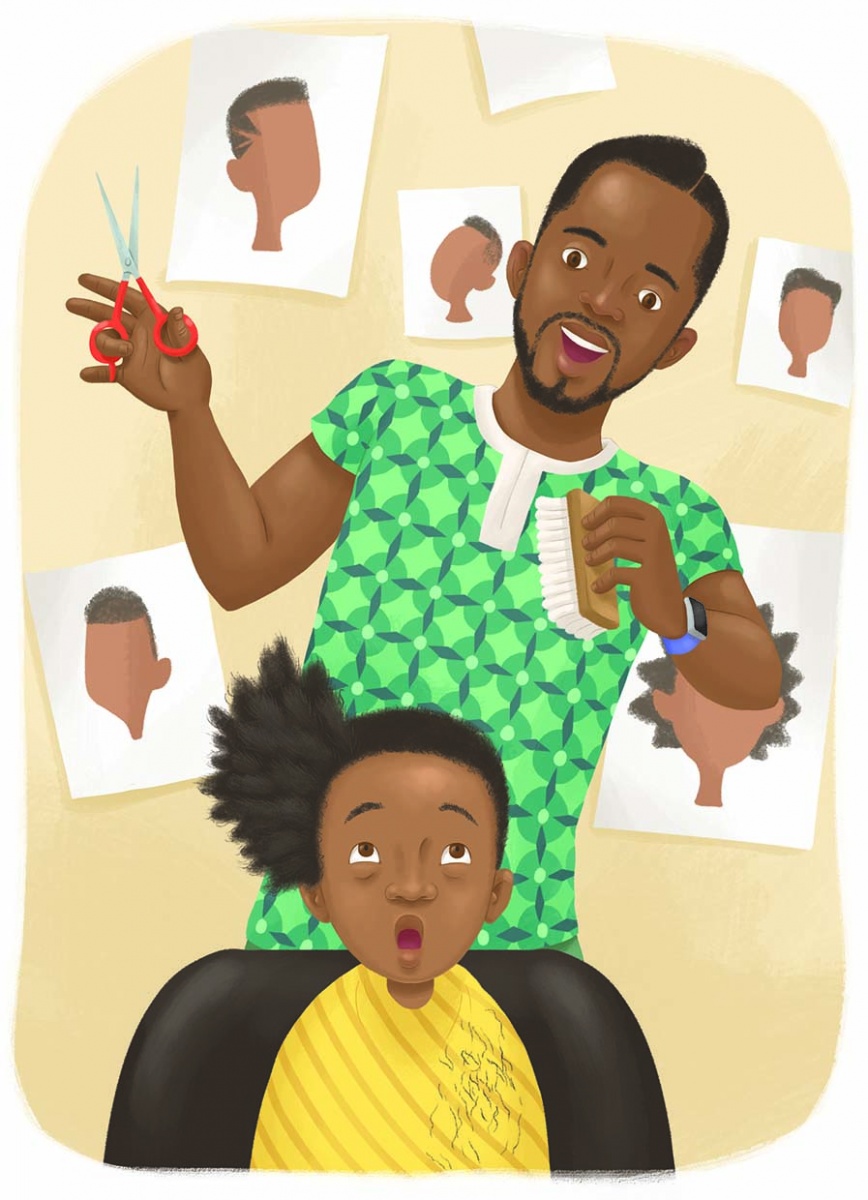 “Really?” asked Timi. “Oh, yes!” said Jango. “And when I had finished cutting the boy’s hair – just as I have done yours now – the boy gave me a very big hug.” Timi looked at his head. His haircut was finished! He had been enjoying the story so much that he hadn’t noticed Jango cutting his hair. He jumped out of the chair and gave Jango a big hug. And do you know what? Timi never cried again at the barbershop because Jango had a new story to tell him at every visit! And Timi’s mom was very happy because Jango’s stories meant an end to her weekly haircut worries.