Once upon a time in the Kgalagadi, there was a powerful old man named Rapula. Rapula had one of the greatest gifts in the world. He had the power to bring the clouds close together when they were far apart. He had the power to make it rain. He was known all over the land as Rapula, the rainmaker. 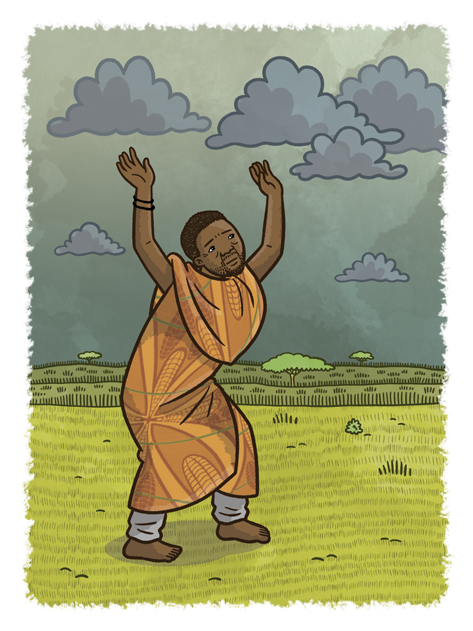 For Rapula, making rain was a very painful process. It took all the energy he had, but it also gave him joy to see his people benefit from the water falling from the clouds. When it rained, the people would collect the water and use it for drinking and cooking. The rivers would fill up and so the animals had water to drink. The rain also fed the farmlands of the Kgalagadi.

After many years of making rain, Rapula, the rainmaker, became ill and his power weakened. The land of the Kgalagadi slowly started to dry up. The green grass and the trees started to disappear. Although the old man kept trying, he could only make small amounts of rain. And each time he tried, he became weaker and weaker.

Soon the old man became so ill and weak that he could not make any rain at all. When that happened, there was a great drought. The lands dried up and the crops failed. There was not enough food. Animals died, plants died, and people died.

The people of the Kgalagadi waited. They still hoped that the rainmaker would get well again. While they waited, they shared what little they had with each other and they gave the rainmaker the best food they had. “Maybe he will get back his strength soon,” they said.

Eventually the people realised that Rapula would never get better. The wise men of the village knew that all they could do now, was wait for Rapula to pass on his special power to someone else.

When Rapula, the rainmaker, died, the people of the Kgalagadi were sad. They had lost a valuable member of their community. However, the elders of the village took comfort in knowing that Rapula’s gift would not be lost. It would be passed on to a younger person.

There was a big funeral to honour the great rainmaker. People came from the faraway parts of the Kgalagadi to be there. They brought with them the little food and drink they had to share with everyone.

Before Rapula, the rainmaker, could be buried in the ground to rest forever, a strange thing happened – something that would show the people of the Kgalagadi who the new rainmaker would be. The colours of the rainbow left the old rainmaker’s body and entered into a young girl named Mapula, who was Rapula’s great-grandchild. This was the most amazing thing anyone had ever seen, but everyone knew that it was the way that rainmakers passed on their power. It happened very seldom because rainmakers lived for many, many years.

Mapula was now the new rainmaker of the Kgalagadi. For days after the funeral, the people celebrated the young girl’s new power. They celebrated with music and food. Everyone in the Kgalagadi brought her gifts of new clothing, flowers, special foods and other things.

It took a few days for Mapula to get used to her power, but soon they became stronger. Now she had to use her gift properly. If she was angry while making rain, she could create a thunderstorm or a flood. This could destroy her entire community.

Even though the Kgalagadi had been without rain for so long, Mapula had to learn slowly how to use her power. First, she learnt to make it rain a little by bringing small clouds together. She practised doing this once a week. Just like her great-grandfather, she became very tired after making the clouds rain. At times she had to sleep for two days to regain her strength.

The people of the Kgalagadi were clever. They learnt new ways to save the precious water. They learnt how to build dams and make big tanks to store water in.

After many months of practise, Mapula was finally able to bring good rains to the Kgalagadi again. Everyone celebrated the big rain with dancing and singing. It had been many years since they had seen that much rain and they knew that the drought was finally over. They were happy that there was a new rainmaker – a rainmaker who would make everyone’s life better.

After you have read The rainmaker, suggest that your children create rain pictures. They could use cotton wool for the clouds and then cut out raindrops from blue paper. Or, they could finger paint the clouds and the rain. They might even want to add rainbows to their pictures!