Once there was a little weaver bird that was very proud of his beautiful yellow feathers and shiny black beak. He sat on the reeds by the side of the river shouting to anyone who would listen, “Look at me! Am I not beautiful? Look at my bright yellow feathers! See how my beak shines in the sun!”

The other birds and animals didn’t like the little weaver bird. It wasn’t just that he was boastful, he was also mean.

“Hey, Crocodile!” shouted Weaver, “You have really ugly teeth. They are big and jagged and yellow, and you have bits of meat stuck in them! Sies! I bet you wish you had a beautiful beak like mine!”

Crocodile slid under the water and thought about how nice it would be if Weaver was stuck in his teeth!

When it was time for Weaver to build a nest, he went about it in his usual boastful way. Instead of choosing bits of grass and reed and feathers like the other birds, he picked up pieces of shiny paper and sparkly sweet wrappers, which he wove into the nest. When he was done, his nest sparkled and twinkled in the sun. “Hey, everybody,” shouted Weaver. “Look at my nest! Isn’t it magnificent? See how it shines in the sun!” 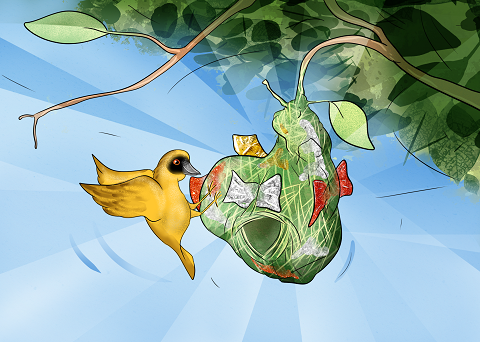 A tortoise ambled past the reeds and stopped to look at Weaver’s strange nest. “Don’t you wish that you had a home like mine, Tortoise?” tweeted Weaver. “Yours is very dull and boring. See how mine sparkles.”

Tortoise shook his head. “I am happy with my shell, Weaver. It keeps me safe, and that is all that is important to me.”

Next, a little field mouse poked her head out of a pile of dry leaves. A piece of foil in Weaver’s nest caught her eye. “Wow, Weaver, your nest is very bright,” she squeaked.

Weaver puffed up his feathers. “Isn’t it?” he said proudly. “Are you not tired, Mouse, of living in brown leaves and twigs? How very sad and drab your house is.”

“No, Weaver,” said Mouse. “When you are my size, you are on the menu of lots of other animals. When I burrow deep into my pile of leaves, no one can see me and that stops me from being eaten. I’d rather be safe than sorry.”

“I am sure that you are just jealous,” sniffed Weaver with his beak in the air.

Now there was a big snake near the river that had been sleeping through the winter. When he woke up, he felt very hungry, and so he went in search of something tasty to fill his stomach. He came across the little tortoise basking in the sun. Tortoise took one look at Snake’s flickering tongue and beady eyes and pulled his head straight back into his shell. Snake nudged Tortoise a few times, but it seemed like this was just a hard shell, so he moved on to look for something that he could sink his teeth into.

Soon Snake spotted Mouse, who was gathering seeds and other tasty treats for her lunch. He slithered towards her, trying to make as little noise as possible, but his grumbling stomach gave him away. Mouse shot off as fast as her little legs could carry her and squirmed quickly down to the bottom of her pile of dry leaves. She lay there quietly, not moving a whisker. Snake prodded the leaves for a bit, but his tummy was now growling loudly. He was too hungry to dig through all those leaves for a meal as small as Mouse, so he moved on.

Soon he found himself down by the river. There, the strangest thing caught his eye. It looked just like a nest, but it sparkled and blinked in the bright sunlight. Snake spotted Weaver flying into the nest. “Funny that a bird would not try to hide his nest from a hungry snake,” said Snake to himself.

He crept silently towards the river and wound his way up the reeds to Weaver’s nest. Luckily, just as he was about to poke his head into the nest and eat the little bird, he was spotted by the other birds, who shrieked and cheeped a warning. Weaver shot out of his nest just in time and managed to get away, but Snake knocked the beautiful nest to the ground, where it broke apart. 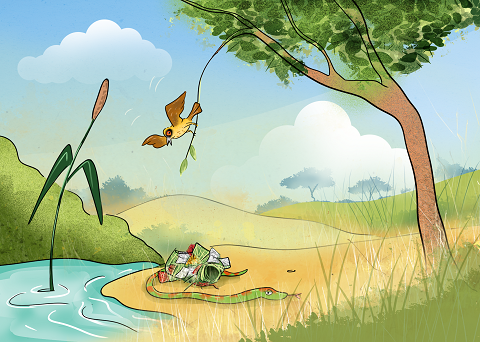 “That will teach you, Weaver, for being such a show-off,” chirped the

“And look!” cried a little chick, “your feathers have turned brown!”

Weaver looked at his wings in horror. They were indeed completely brown. He felt very ashamed. Not only had he nearly been eaten, but his house had been destroyed and his beautiful yellow feathers were quite brown and ordinary, just like lots of the other birds.

Weaver had learned his lesson. He stopped showing off and started being kinder to the other animals. Although his feathers turned yellow again, to this day, every winter, they turn brown again to remind him of his foolishness.

* Use clay, playdough or even Prestik to create the characters in the story, or draw your own pictures of them and cut them out. Use your characters to retell the story in your own way!

* Use clay, playdough or even Prestik to create the characters in the story, or draw your own pictures of them and cut them out. Use your characters to retell the story in your own way!