Temo and the plant thieves.

Temo was a clever young girl who lived in the village of Qunu. She loved going to school and learning new things.

One day at school, her class learnt about planting and growing vegetables. Temo was so fascinated by this idea that she could not wait to get home to tell her parents about it.

When Temo arrived home, her mother and father were in the kitchen having tea.

“Hello, Mama. Hello, Papa,” she said as she walked into the kitchen.

“How was your day at school today?” asked her mother.

“It was good! I learnt something very interesting,” replied Temo excitedly while making her way to her bedroom.

Temo’s parents wondered what their daughter was talking about, but before they could ask her to explain, she had disappeared.

Temo walked back into the kitchen. “Ta-da! Mama and Papa, look!” she said.

Her parents were very surprised. Temo never wanted to do any chores at home, so why was she suddenly dressed in work clothes?

“Why are you dressed like that, Temo?” her father asked.

“Because I want to start growing my own vegetables, Papa,” she said excitedly.

“So, you want to have your own garden here at home?” her mother asked.

complained about chores as simple as making them tea. But they decided to have faith in her anyway.

So Temo and her father went outside and chose a piece of land in their yard where Temo could start her garden. Then Temo’s father went inside to change into his overalls. 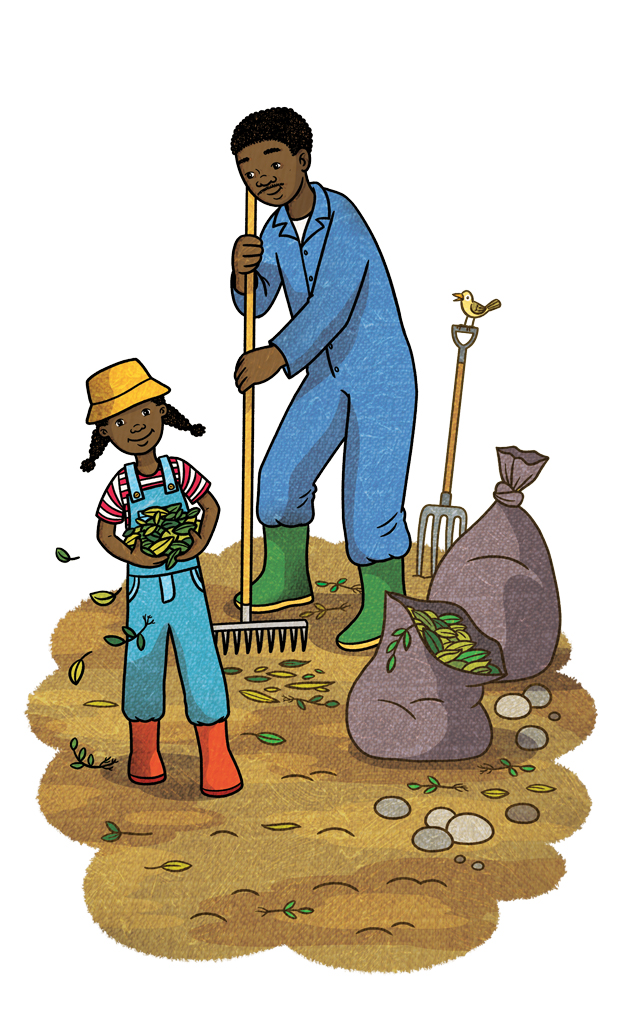 First, Temo and her father used a garden fork to break up the ground they had chosen. This helped make the

soil soft for planting seeds. It also helped loosen unwanted weeds and stones under the soil. Next, they raked all the

unwanted weeds and stones from the soil. Temo and her father put all the weeds into big black plastic bags and threw them into the dustbin.

The next day when Temo came back from school, she quickly changed out of her school uniform and went into her garden

with her father. Her father had bought some seeds for them to plant. So, they planted and planted! They planted spinach,

carrot, tomato and bean seeds. Then Temo watered the soil to help the seeds grow. Every day after that Temo was excited to come home from school and water her garden.

But there was a little problem: while no one was looking, the animals were starting to eat Temo’s vegetable plants!

One day, when she came home from school, Temo found the goats feeding in her garden. She chased them away and ran into the house.

“Mama! Papa! The goats are eating my vegetable plants. Why didn’t you watch out for them?” she said, crying.

“Sorry, Temo,” apologised her father. “Mama and I were taking a nap. Let’s go outside and see what we can do.”

So they went into the garden. What a mess the goats had made! But at least only a small part of the garden had been damaged.

“Let’s build a fence around the garden, Papa,” Temo suggested.

So Temo and her father built a fence around the garden so the goats could no longer get in.

The next day when she came home from school, Temo found the cows eating her plants. The cows had been clever enough to open the garden gate with their horns!

Temo tried to chase the cows away, but it only took one cow with large, sharp horns to look at her and she was terrified!

The cows looked so big! So she ran into the house.

“Mama! Papa! This time the cows are eating my vegetable plants,” she said. 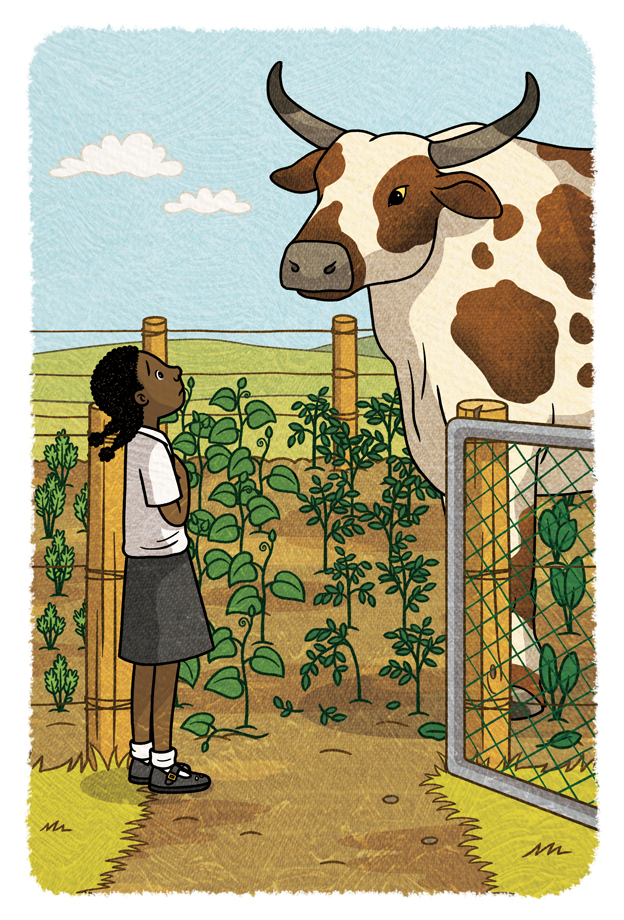 Temo and her father went outside and found the cows grazing in Temo’s garden. Her father chased them away.

“Papa, why don’t we lock the gate with a padlock?” Temo suggested. “That way the cows won’t be able to open the gate again.”

Her father thought that was a good idea so they went and bought a padlock and they locked the gate.

The next day when Temo came back from school, she found not the goats, not the cows, but the birds eating the plants in her garden!

She chased them away and ran to tell her parents.

“Mama! Papa! Now the birds are eating my vegetable plants,” she cried.

Temo’s father went outside with her to see what the problem was.

“I don’t know what to do now, Temo,” said her father scratching his head as he thought hard.

“I know what we can do,” said Temo quickly. “We can put a net over the garden, then the birds won’t be able to get to the plants.”

And Temo was right! She never had to worry about any animals eating the plants in her garden again.

The plants in her garden grew and grew, and soon the vegetables were ready for picking! Temo’s mother cooked a tasty

soup of beans, carrots, spinach and tomatoes and they all enjoyed a meal that had come from Temo’s garden.