Marie-Lou Maritz was born during a storm, a wild storm that nearly destroyed the little fishing village where she lived. Roofs were ripped off the cottages, windows shattered, trees uprooted and vegetable gardens blown away. 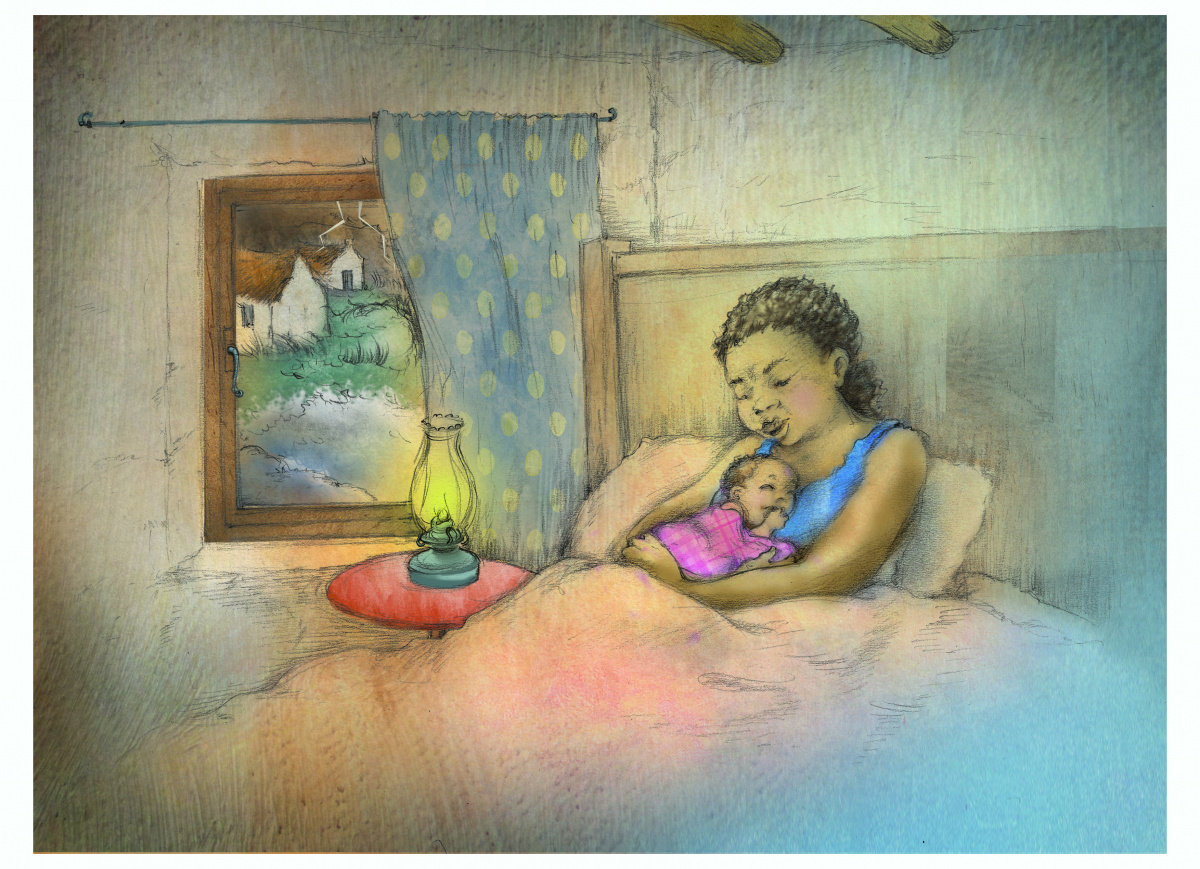 But far worse than that, many of the fishermen … husbands, brothers, sons and fathers … never came home. And amongst them was Marie-Lou’s father.

With so few men left in the village, the women had taken to fishing. And it wasn’t too long before Marie-Lou’s friends started going out with the boats too. But not Marie-Lou because she was blind, or as her mother always said, “Marie-Lou sees things differently.”

Marie-Lou hated being left behind, hated not being able to help. Once she even sneaked onto a boat, but someone saw her. Still, she soon found ways to be useful. Marie-Lou learnt to mend nets, clean fish and scrub down the decks. And she learnt, better than anyone, to read the wind – to know when to cast the nets and when to leave the sea alone.

Then one evening, as if from nowhere, a fierce wind swept through the village. The villagers dropped everything and struggled indoors as hats, washing, plants, even a bicycle and wheelbarrow were blown down the road. Thankfully no one was out at sea.

The villagers watched from their shuddering cottages as the storm raged on and on. But not Marie-Lou, she listened. And what she heard was the snap of trees blown over like matchsticks, the swish-swish of shifting sand dunes, the crashing of waves onto rocks and then … silence.

The morning after the storm, Marie-Lou got up early and, without waking her mother, swept up all the sand that had blown into their cottage. Then she went outside.

Marie-Lou listened to the gentle lap-lapping of the sea. It had sounded so different, so angry, during the storm. And then she heard a strange faraway sound: first it was a whimper, then more of a squeal. It came and went like the waves.

Slowly, carefully, Marie-Lou followed the sound until a few steps away from the water’s edge she stopped. One moment the sound seemed to fly high up into the sky like the squawking seagulls. The next it seemed to float in and out of the water that swirled in the rock pools. Marie-Lou knew she was close to the sound even though it was growing softer and the gaps between it longer. Then it stopped altogether.

Desperate, Marie-Lou rushed ahead and slipped on a rock. Something brushed against her foot. Thinking it was a piece of sea weed, she reached down to move it and felt … floppy wet ears, a wet nose, four wet paws and a wiggly wet tail. Marie-Lou tried to pick up the soggy little thing, but a rope around its neck felt like it was caught up in the rocks. 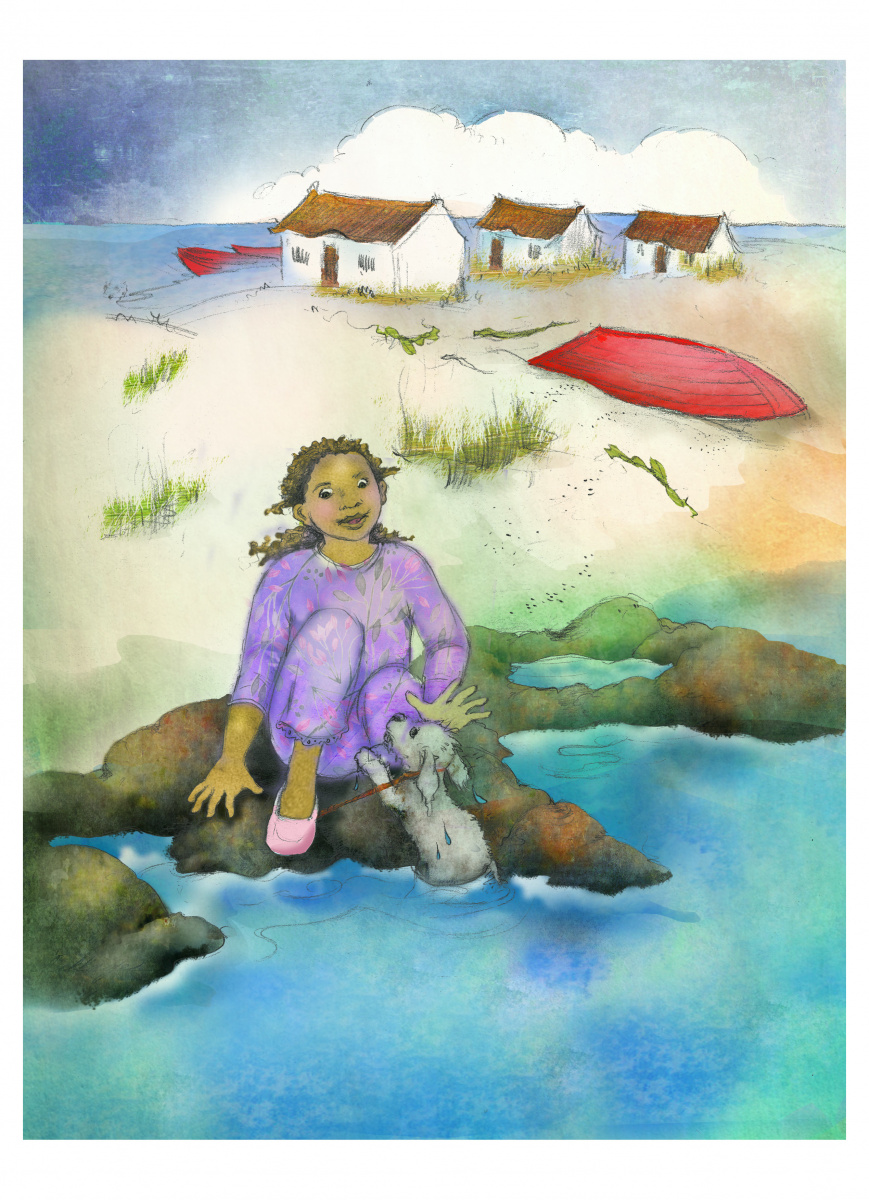 Eventually, with the rope free, Marie-Lou scooped up the half drowned puppy. She smiled as it made little snuffling sounds and snuggled into her neck. Then she remembered her mother. How worried she would be – worried and cross! She turned to go home, but too quickly, and she stumbled and fell.

And that was when Marie-Lou’s mother found her. She hugged and scolded, scolded and hugged Marie-Lou all the way home.

Later, Inspector Madliwa came around to take down details about the puppy. He saw how sad this made Marie-Lou, so he told her that if no one came for the puppy within a week, then she could keep her. He smiled and said, “Actually, I think you were made for each other.”

How slowly that week passed for Marie-Lou. But by the end of it, no one had come for the puppy. So, Marie-Lou named her Storm.

Even though she was still a puppy, Storm was never far from Marie-Lou’s side. And it was not long before Storm knew Marie-Lou’s every move – Marie-Lou began to think that Storm knew what she was going to do even before she did! She was there to guide Marie-Lou away from danger, there to carry her school bag and always there to watch over her as she slept.

* What colours do you think of when you think of a storm? Use different coloured paints to create a picture of an angry storm on a large sheet of paper.

* Make an animal clinic card for Storm, the puppy. Write the details below on a sheet of paper and then draw a picture of Storm in a block above them.