Sefako and the singing crocodile

Many years ago, in a faraway village, there lived a beautiful girl called Sefako. Sefako stole the hearts of many men in the village. They would write poems and songs praising her beauty. But Sefako was not interested in marrying any of them, and this made her father angry because he thought it was time for his daughter to settle down.

What Sefako did not know was that she had an unusual secret admirer! And this secret admirer was the crocodile who lived at the river where she fetched water. Every day, a few hours before sunset, Sefako would walk down to the river with her clay pot to fetch water for the evening meal.

Sefako had a habit of taking a short nap under her favourite tree after drawing water from the river. The crocodile often hid in the water watching her sleep. He longed to speak to her but had no idea as to how he could get her attention without scaring her.

One day, the crocodile found the courage to come closer to Sefako after she had fallen sleep. The lovestruck crocodile was so happy to be near Sefako that he started singing about his love for her. 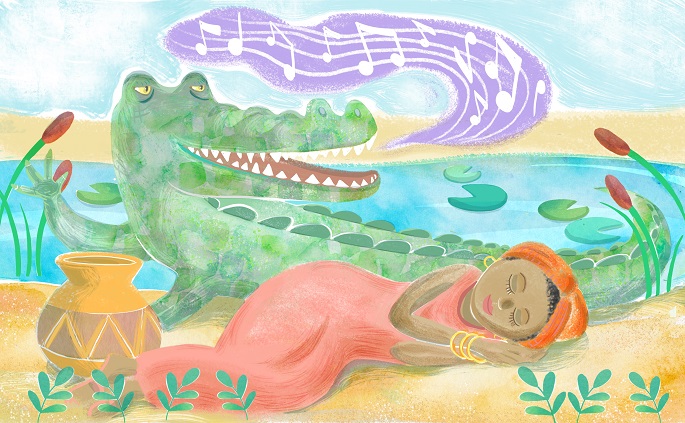 Sefako heard the beautiful song and turned in her sleep, thinking that she had to be dreaming. The crocodile did not want Sefako to wake up and see him, so he slid back into the river quickly.

This happened again the next day … and the next … and the next. Sefako would hear the crocodile singing to her in her sleep but when she woke up, there was no one around. She only heard the gentle rustling of the leaves and the cattle bellowing far away.

The singing moved her heart, and Sefako wanted to see the singer more and more. So Sefako began to search for the mysterious voice among the reeds, trees and grass but she found no one.

One day, Sefako decided she would not search for the mysterious singer any longer. Instead, she planned to catch the owner of the beautiful voice!

Sefako collected water from the river as usual and went to lie down under her favourite tree pretending to sleep. As usual, the lovesick crocodile crawled out of the river to sing to her.

When Sefako heard the beautiful voice, she opened her eyes quickly and found herself gazing into the eyes of … A CROCODILE!

Sefako was very scared! Quickly, she leapt to her feet, knocking over her clay pot and spilling all the water on the ground. Then she started to run up the bank but, unfortunately, tripped over a rock and fell, hitting the ground with a heavy thud. The lovesick crocodile, who had followed her, stood nearby watching her. As he crawled closer, Sefako froze with fear.

“Don’t be afraid,” said the crocodile gently. “I have watched you sleeping under that tree for so many days, but I have not hurt you. Why would I eat you now?” Then the crocodile started to sing a soothing song that instantly warmed Sefako’s heart.

No longer afraid, the beautiful girl sat up and listened to the voice that she was growing to love.

After that, Sefako would rush down to the river to meet the singing crocodile every evening, and after a while, she decided that she wanted to marry him.

Eventually, she found the courage to tell her father.

Sefako’s father was not pleased at all! “Does this crocodile of yours have any cattle to pay your dowry?” he asked angrily. “Will he be able to give you children and build a home for you?”

Even though Sefako’s father did not approve of her marrying the crocodile, her feelings did not change. When her father realised that his daughter was not going to change her mind, he locked her up in one of the village huts. Every day at midday, he would bring her food and check on her.

But one day Sefako’s father forgot to lock the hut’s door. Sefako waited a while to make sure it was safe before she opened the door and quickly ran down to the river.

As soon as she got there, Sefako called out, “Crocodile, Crocodile, it’s me, Sefako!” The crocodile, who had been looking for her desperately for many days, rose from under the water to greet her.

The next day, Sefako’s father discovered that she was missing, and he was furious! Filled with anger, he grabbed a thick stick and followed his daughter’s footprints to the river. He was determined to stop his daughter from marrying the crocodile.

When he reached the banks of the river, he saw Sefako swimming in the river with the crocodile beside her.

“Sefako, Sefako,” he called. “Come back here immediately! You may not marry that crocodile.” 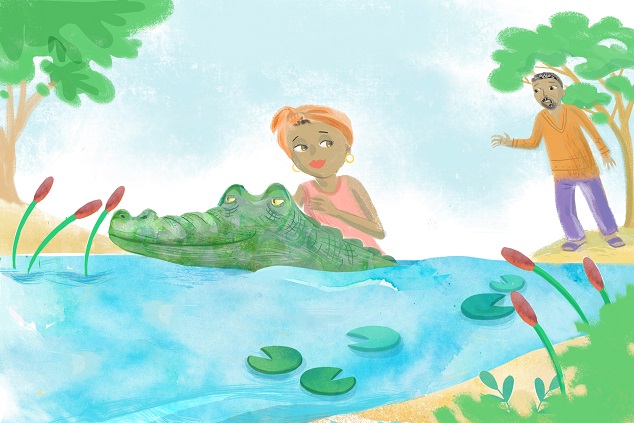 Sefako turned her head and waved to her father before swimming away with the crocodile. The troubled father watched helplessly as his daughter and the crocodile disappeared under the water.

Some time later, Sefako returned to visit her village. Her father’s heart was filled with joy to see her. He had missed her so much, and in that moment, he knew what he had to do.

“Welcome, welcome, both of you,” he said, running to greet Sefako and the crocodile. And then he turned to the crocodile and said, “Welcome to our family.”

* Sefako falls in love with a crocodile. Do you think it is possible to love a crocodile? Why or why not?

* If you could have any animal for a friend, which animal would you choose, and why?

* Draw your favourite animal. Write a song or poem about your animal.