Dimpho and Sello’s mom had a problem. “My feet felt like blocks of ice last night!” she told the children one Monday morning. “They were so cold I couldn’t sleep. Now I’m very tired!”

“I know!” said Sello. “Why don’t you wear socks in bed tonight?”

“What a good idea!” said Mama. “My children are so clever!”

That night, she put on her thickest woolly socks. “Auntie Thoko gave me these socks for 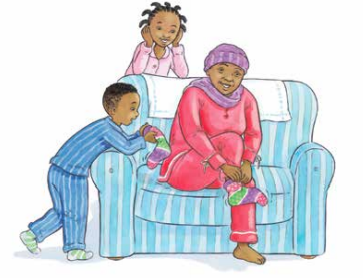 But Mama was wrong. On Tuesday morning, she was tired again.

“I couldn’t sleep a wink,” she sighed. “If only I could warm up my silly cold feet!”

“Mama,” said Dimpho, “why don’t you soak your feet in hot water before you go to bed tonight?”

After supper that night, Mama poured hot water into a big red basin. “Mmmm, this feels good!” she said, swishing her feet about. “I’m sure I’ll sleep well tonight.”

But guess what? On Wednesday morning, she was tired again. “At first it was perfect,” she said, “but after a few hours, it was the same old story … cold, cold feet! I’ll just have to think of something else. Eat up, now! It’s time to go to school!”

When Mama came home from work that evening, Dimpho had some good news. “My teacher says that drinking ginger tea makes you feel warm all over,” she explained. “Ginger tea will warm up your feet!”

“Okay,” said Mama. She didn’t sound very happy. After so many nights of not enough sleep, she felt very grumpy!

But Mama didn’t forget what Dimpho had said. On Saturday morning, before she left for work, Mama asked the children to go and buy some ginger. “Nothing else has helped,” she said, as she got ready for work. “Maybe ginger will do the trick!”

Off went the children. “What are you looking at, Sello?” asked Dimpho when they came to the big road near the shops. Sello didn’t answer. He was staring at something nearby. “Sello!” said Dimpho again. “Hold my hand. We need to cross the road now.”

“Not yet!” said Sello. “Look over there! We need to help that cat!” And before Dimpho could stop him, Sello had rushed off.

On an empty plot, two boys about Sello’s age were teasing a grey cat. They laughed. The cat was trying to escape.

For a small boy, Sello had a big, loud voice. “STOP THAT!” he shouted. “Leave that cat alone!”

The boys looked up. “Why should we?” said one of them sulkily, but the other boy let go of the frightened cat. “What do you care, anyway? It’s only a stupid stray cat! Come on, Jabs, let’s go!”

When Dimpho and Sello’s mom came home that afternoon, she couldn’t believe her eyes. Her children were patting a fluffy grey cat. The cat was purring and licking itself. Mama saw that they had fed it some leftover meat.

“What on earth is going on?” she asked angrily. “Why did you bring that animal home? Get rid of it right now!”

“But Mama, it’s raining outside,” said Sello. “Kitty will get wet! Please can we keep her, just for tonight? PLEASE?”

Mama looked out of the window. It was true. When she got out of the taxi, there were grey clouds in the sky. Now it was pouring. “Fine,” she said with tight lips, “but tomorrow, that cat goes.”

“Thank you, Mama!” said both children.

“Hmmmph,” said Mama. She sat down, took off her shoes, and rubbed her feet. “Where is that ginger you bought me?” she asked. “It’s time for my first cup of ginger tea!”

The children stared at each other with huge, round eyes. They had forgotten to buy the ginger! Mama was very cross. She stayed cross all night. As soon as the kitchen was clean, she went straight to bed.

On Sunday morning, when Dimpho and Sello woke up, there was no sign of their mom. They were surprised – she always woke up early. They couldn’t see the cat either.

“Let’s check that Mama’s okay,” said Dimpho. Quietly they opened the door to her room, and peeped in. What do you think they saw? Mama was lying in bed, looking lazy. The cat was curled up at her feet, purring loudly.

“Morning,” said Mama. “What a good night! Warm feet at last!” She looked at the cat. “I think we may have to keep you!” she told it. “Let’s call you Ginger!” The grey, fluffy cat purred even louder. 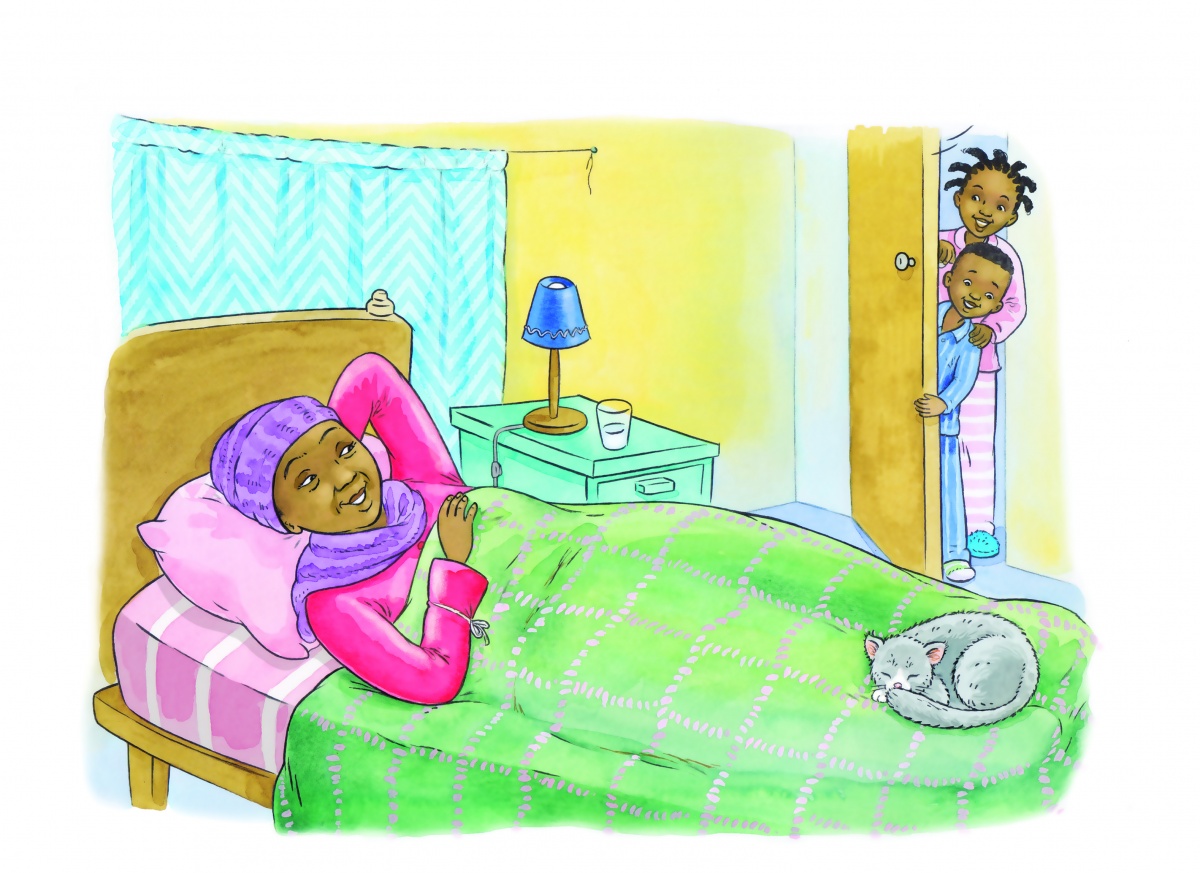 The children laughed, clapped and bounced about. Then Sello stopped. He was frowning. “But, why are we calling her Ginger?” he asked.

“Well,” said Mama, “you two went to the shop to buy some ginger, but you brought this cat back instead. She kept my feet warm like Dimpho said the ginger tea would, so her name is Ginger!”

And that was what they called her.