Dumi Dassie lay flat on his back, sunning his fuzzy tummy on a big, flat rock. He was nearly asleep when he heard loud giggles. Lazily, he opened one eye. Two little dassies were scampering by. 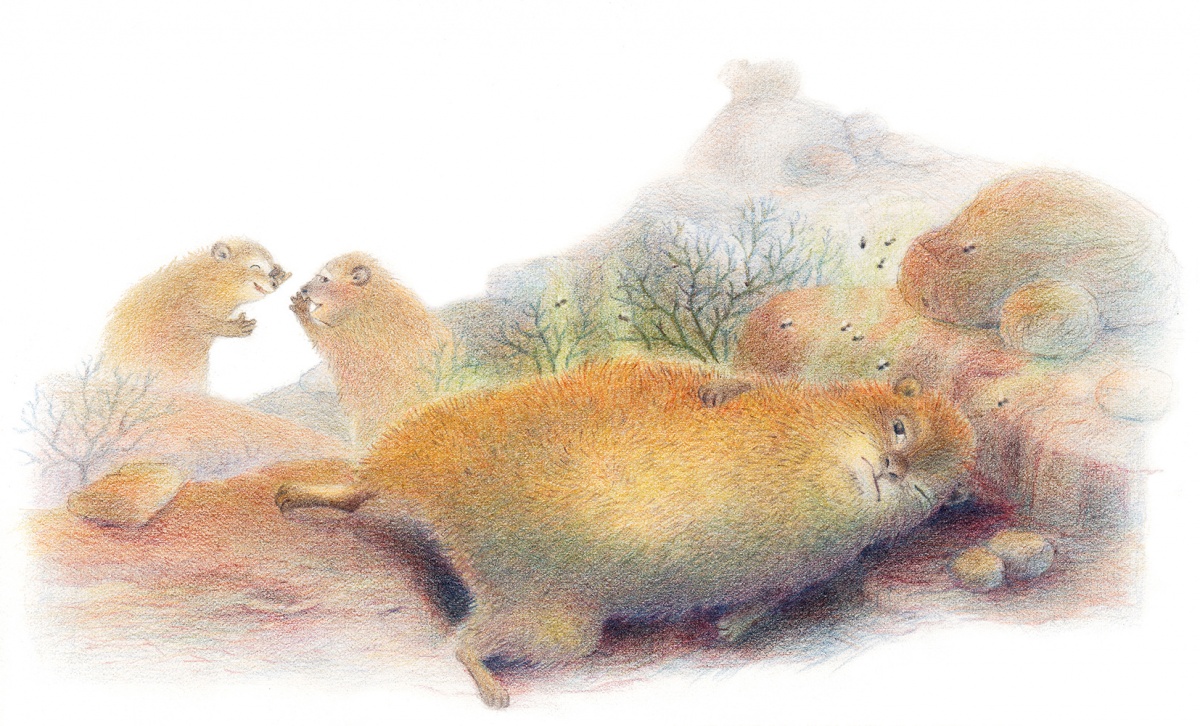 “EWWWW!!!” said one of them to the other when they were safely past the rock. “That dassie smells BAD!” They giggled some more as they rushed off.

Dumi sighed, and flicked at a fly that was buzzing around his ear. “It’s not fair!” he thought to himself. “Nobody understands me.”

It was true. Dumi smelled bad because he was dirty. He was dirty because he never washed, but nobody knew why. The truth was, Dumi was scared of water. Once, when he was still a baby, he fell head first into a big muddy puddle. Dumi couldn’t swim, but luckily, his big brother fished him out by his hind legs. Ever since that day, Dumi couldn’t bear to be near water. When the other dassies went to the pool every morning to wash, Dumi slunk off and hid in the bushes. Nobody could get him to change his mind about water – not even his mother!

The days passed – the summer was very hot and there was no rain. Dumi grew dirtier and dirtier. His fur was greasy and matted, and he smelled horrible. Even worse, a swarm of flies followed him wherever he went. Dumi didn’t like this, of course, but he acted like he didn’t care.

One morning, the village elders came to talk to Dumi. They stood far away, and Dumi saw them holding their noses and gasping for air.

“We are sorry, Dumi,” they said, “but as you know it hasn’t rained for a long time. There are many flies around. Flies love dirt, and you are very dirty, so the flies love you! All these flies will make us sick … It is best that you leave this village.”

Poor Dumi! What could he do? Sadly, he slunk off. He walked and walked. The day grew hotter as the sun rose high into the bright blue sky. His head felt heavy, and his feet were so sore! Eventually, he felt he could not walk another step.

“I need some shade!” he said, looking around. There weren’t many trees in this part of the veld, but he saw a small thorn tree not far away. Slowly, Dumi limped over to this little tree. He lay down under it, and fell fast asleep.

Many hours passed. Dumi had been sleeping so soundly that he hadn’t seen the storm clouds gathering in the sky. The sun had disappeared. The sky grew dark. The air grew cooler and cooler, but still the tired dassie slept. At last, the rain began pelting down.

Dumi woke up. Fat raindrops were splashing all over his body! In the dassie village, all the dassies hid from the rain under the big rocks. But here, there was nowhere to hide! At first, when Dumi saw and felt the rain, he screamed and cried and rolled into a little furry ball. “Help!” he yelped. “Somebody help me!” But even the flies were gone, and Dumi was all alone.

Then a strange thing happened. As the cool rain ran over his body, Dumi realised that it felt good. Slowly, he calmed down and after a while, he even dared to open his eyes. “The rain looks pretty,” he said, “and it makes the veld smell fresh!” Then Dumi stood up, and opened his mouth to drink the raindrops. “It tastes good too!” he said in wonder. He was so happy that soon he began to tap his foot and click his fingers.

Dumi arrived at the village at sunset. None of the other dassies saw him – they were all hiding from the rain under big rocks. Dumi didn’t care. He was used to being alone, and anyway, he felt so happy! He ate a few leaves for supper, crawled under a bush and fell fast asleep again.

When Dumi woke up, the rain had stopped and the village looked beautiful and fresh. As the sun rose, a carpet of bright pink flowers burst into bloom.

“Wow!” he said, looking around.

Just then, all the other dassies came walking towards him. They were on their way to the pool to wash. How surprised they were to see the new, clean, sweet-smelling Dumi!

“Dumi! What happened?” they all asked, crowding around him. But instead of speaking, Dumi began to click his fingers and tap his foot … soon he was dancing and singing again. All the dassies joined in, as they made their way to the pool: “The rain! The rain! We love the rain! Imvula! Imvula! Imvula!” 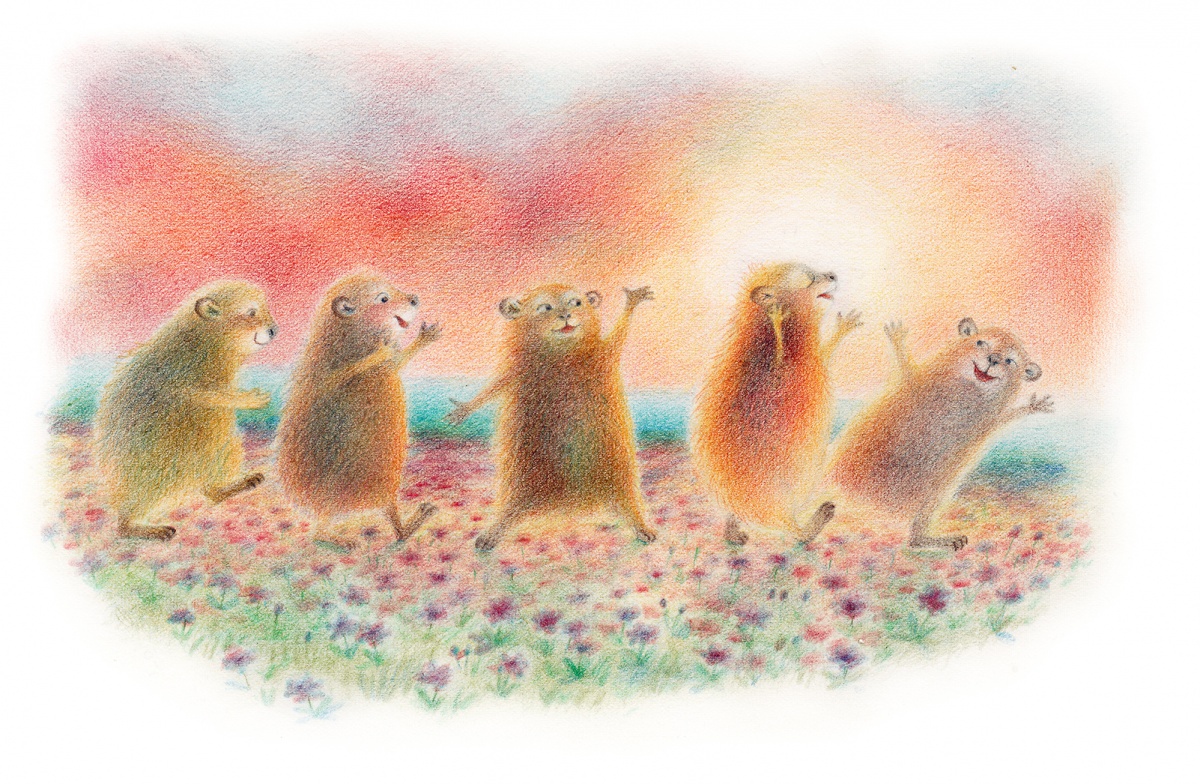 Give your children large sheets of paper and suggest that they draw pictures of how Dumi Dassie felt about water at the beginning or the end of the story – or both!