The tale of Oxpecker and Buffalo

In the old days, Oxpecker had a bright yellow bill. He lived in a little hut in a patch of long grass.

Each day he would sweep his hut before setting off into the grass to catch his favourite food.

At night he would climb into his nestbed, his belly full of green grasshoppers, flies and wriggly worms.

If anyone came into the patch of long grass, Oxpecker would fly up and shout at them. He would peck them and make a fuss until they went away.

He liked to live alone, and he didn’t want to share with anyone. One day, while Oxpecker was out searching for insects, he heard a low rumble,

like the sound of thunder rolling in the hills, and something blocked out the sun. “What now?” shrieked Oxpecker, flying up out of the long grass to get a better view.

A big, black animal with heavy horns was walking through the long grass. 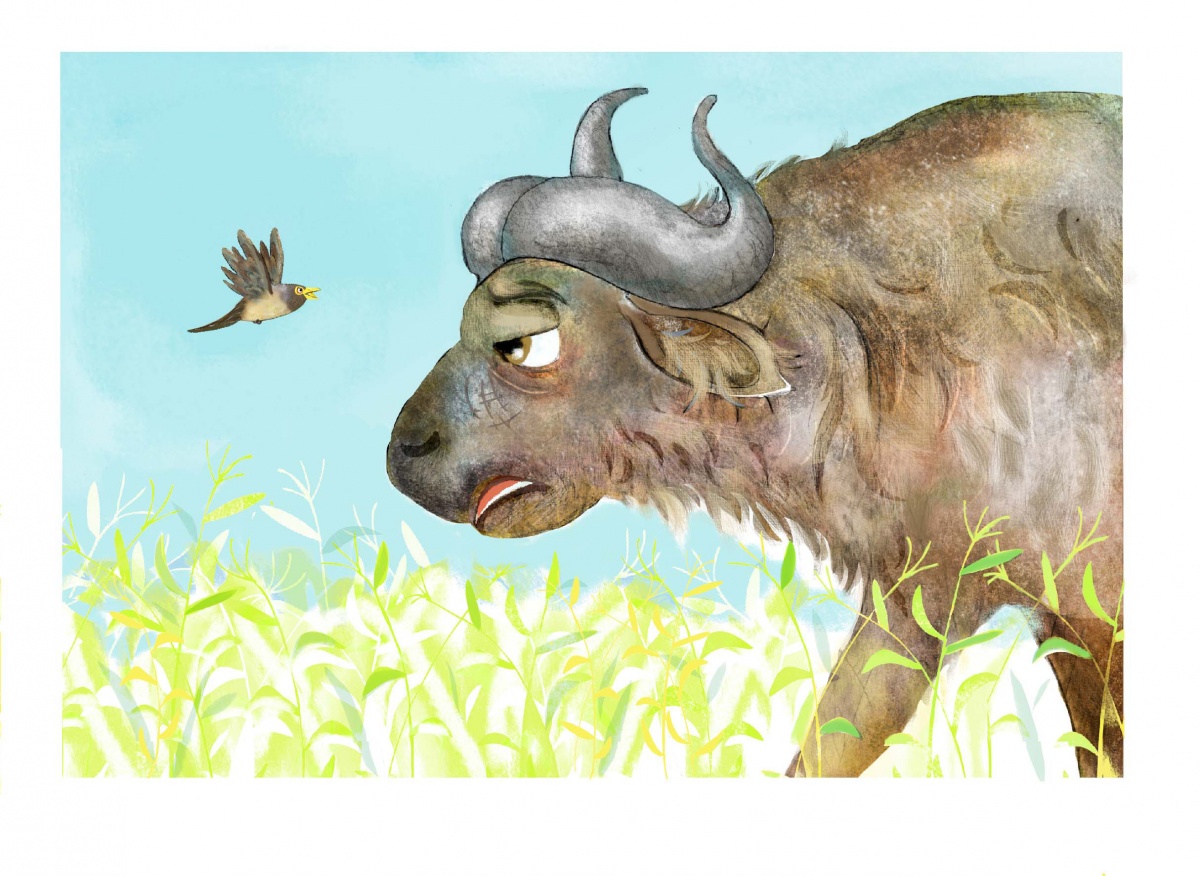 “Hello,” said Buffalo. “I haven’t eaten anything in weeks. This long grass is exactly what I need. May I have some?”

“No! Go away!” shouted Oxpecker. “Well, I’ll die if I don’t eat something. There hasn’t been any rain for months.

This is the only patch of long grass around here. Won’t you let me eat some of it, please?” “Didn’t you hear me?

Go away!” said Oxpecker flying around Buffalo’s head. “But you don’t even eat grass,” Buffalo said. And then he tried again,

“We could share the grass.” “I don’t share! This is mine! Mine! Mine! Now go away!” shouted Oxpecker.

Buffalo’s forehead wrinkled and his eyes narrowed to slits. He got so angry that his tail swished back and forth,

making a loud clapping sound as it struck the sides of his rump. “Well, if you are going to be rude, I’m going to eat it anyway.

I eat grass, that is what I do, and I am hungry, so here I GO, you rude bird,” said Buffalo about to chomp on some grass.

“You wouldn’t dare!” shrieked Oxpecker. “How are you going to stop me? Look at how big I am. And because you’re being so rude,

I’ve decided that I’m going to eat and eat and eat until I’m full.” And with a loud MUNCH! CRUNCH! Buffalo started to eat.

This made Oxpecker so angry that the end of his beak turned bright red. Oxpecker flew around Buffalo’s head shouting and shrieking and whooping,

but Buffalo just kept on eating. Soon all the long grass was gone. To make matters worse, Buffalo put his big hoof right through the roof of Oxpecker’s hut.

Oxpecker flew up onto Buffalo’s back and started pecking away at his skin. “That’s not going to work,” said Buffalo. “My skin is very thick.

Even Lion has tried to bite me with his sharp teeth and I got away. You are too small, Oxpecker. And you deserved what you got. I was willing to share.”

“Well, that’s it then,” said Oxpecker growing suddenly quiet. “I was only angry and rude because that was my home.

Now I have no home and no food – all those delicious green grasshoppers, flies and wriggly worms that lived in the long grass are gone! Everything’s gone.”

Buffalo looked back at Oxpecker, who was crying, and then to the bare patch of earth and the broken hut. “I’m sorry I destroyed your home,” he said,

“but maybe I can make it up to you. I have a problem with insects, you see. I mean, just take a look at my back.

There are always far too many insects hanging on and crawling all over me. You could eat them, and it would be really nice to have someone finally get rid of them for me.”

Oxpecker looked up and down Buffalo’s body and noticed all the little insects clinging to Buffalo’s skin. The bird’s tummy rumbled,

but the thought of doing Buffalo a favour after everything he had done, made Oxpecker angrier and angrier. His yellow bill grew redder and redder.

“First you ate all my lovely grass!” shouted Oxpecker. “Then you wrecked my house. You actually put your big hoof right through the roof!

Now you want me to eat all these insects as a favour!” He walked up and down Buffalo’s back, pecking at the insects as he talked.

“You really are the worst, Buffalo! As if I would help you,” he said with his little mouth full of insects. 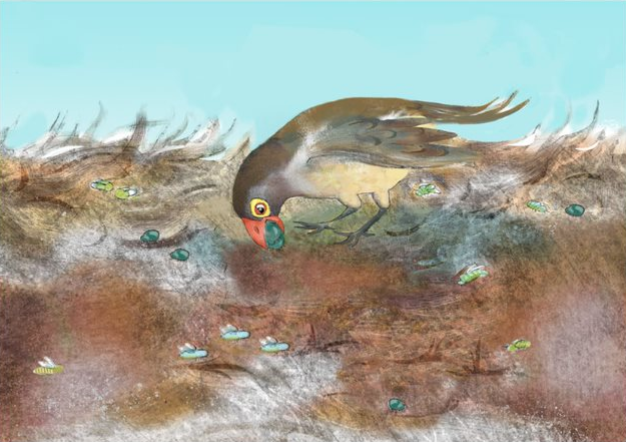 Buffalo simply shrugged and walked off with Oxpecker riding on his back, shouting and eating insects.

And they are still doing that to this day, but Oxpecker never forgave Buffalo, and his yellow beak stayed red forever.