Snails have feelings too!

The snails who lived in Mrs Mondliwa’s garden were very unhappy.

“I’VE HAD IT!” grumbled Slimy Snail.

“Me too,” agreed Speedy, his best friend. “Why can’t we snails be liked more by the other garden bugs?”

“I’m fed up with all of this bad treatment,” continued Slimy.

“I have an idea. Let’s get all the snails together and complain to the other bugs,” suggested Slimy.

“That’s a great idea,” agreed Speedy. “We’ll tell them that they have to like us more.”

The next day, Speedy and Slimy and all the other snails met under the thorn bush to chat to the other garden bugs.

“We snails want to be shown some respect,” said Speedy. “We also want all of you to like us more.”

“But what have we ever done wrong?” asked Slimy.

“WHAT! Just look at this bruise on my leg,” began Grasshopper. “Do you know how I got it? From snails! You snails slither your slime all over the place causing us to slip and hurt ourselves. Do you have any idea how slippery that stuff is?”

“We’re so small, we get stuck in your slime,” added Queen Ant.

“Oh dear!” said the snails surprised. “We had no idea.”

“And that’s not all,” Caterpillar said. “Do you know what traffic jams you cause?

You snails are sooooo slow.”

“And that’s not all,” added Butterfly. “Could you please stop eating all the flowers?

You are destroying our beautiful garden.”

The snails felt awful. They had no idea they were causing so many problems.

The little snails felt so bad that they began to cry. 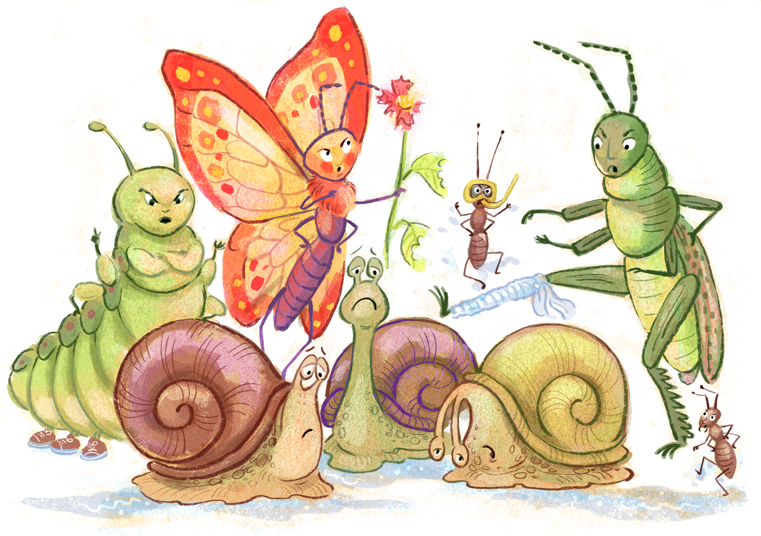 “There must be something good about snails?” Slimy pleaded.

The other bugs were silent. They thought and thought about what might be good about snails.

Eventually, Butterfly said, “NOPE! Sorry, but you snails are just awful. There is not one good thing about you!”

“In fact, we think all the snails should leave the garden. The rest of us have had enough!” added Worm, even though he was quite slimy himself.

“SNAILS OUT! SNAILS OUT!” the bugs began to chant.

“Yes,” said Speedy. “Give us a chance and we’ll prove that snails can do some good.”

The bugs thought for a moment. “Very well then,” they agreed. “You have two days to prove to us that you are useful, or else, goodbye!”

After the bugs had gone back to their parts of the garden, the snails sat and thought and thought.

“How about we learn to run?” suggested Speedy.

“Oh no!” said the oldest snail. “Now what? We have to come up with an idea that will make the other bugs like us.”

“I’ve got it!” said Slimy. “Let’s try eating weeds instead of flowers.”

“Okay, why not?” agreed the others. So, the snails tried to eat only the weeds in the garden.

“Oh no, this is not going to work. Weeds taste TERRIBLE!” said Speedy after a little while. 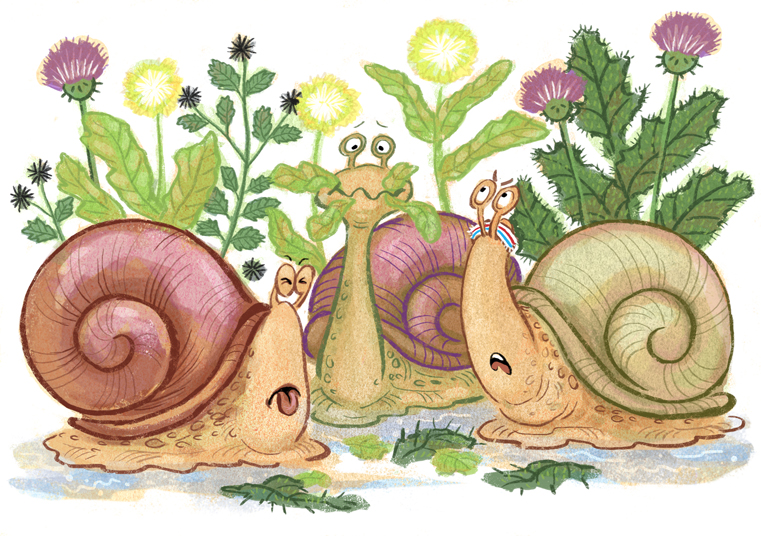 The snails felt very sad. Some even started to pack up their homes to leave.

“Hey, I’ve got an idea,” giggled Simphiwe, the youngest snail. “I need you all to meet me at the top of the anthill.”

“Are you crazy? It’ll take us all day to climb up there,” said Slimy.

“So, what’s your great idea?” they demanded.

“Yes?” said the other bugs.

“You’ll definitely let us stay when you see what we’ve made,” said Simphiwe.

The other bugs stood completely still, their eyes glued to Simphiwe.

“Ta-da,” said Simphiwe moving towards the slope of the anthill. “We’ve made you the most wonderful SLIPPERY SLIDE from all of our snail slime!”

There was a long pause as the bugs all thought about this idea.

And they did. The bugs all took it in turn to slide down the gooey slippery slide. It was loads of fun. Everyone loved the slide and so it was decided that the snails could definitely stay in the garden!