It was late when Nolitha eventually fell asleep, her head full of mermaids, seals and sailors. Outside stars twinkled and the African moon cast shadows on the dried out earth. Tomorrow she was going to the seaside for the very first time.

The journey seemed to take forever. Through brown hills folded into each other and over a craggy mountain pass. But then, at last, Nolitha saw the edge of the earth sink into the vast ocean.

Salt air rushed at Nolitha. Waves thundered. Seagulls squalled. Cormorants dive-bombed. It wasn’t like that in her picture book! While Mama unpacked, Nolitha explored this new world where twirly-shelled sea snails burrowed into the wet sand and fish darted for shelter in rock pools. 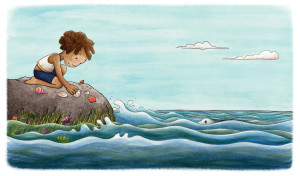 Nolitha collected shells including mermaid’s money, tuning into the sounds and smells of the ocean, as she made her way to a cluster of rocks. From the top of the rocks, Nolitha waved her “I’m okay” wave to Mama. Then she counted out her mermaid’s money and day-dreamed about how she would spend it.

How quickly the morning had gone! But, the sea air had made Nolitha very hungry and Mama’s yellow corn bread and pickled fish sandwiches tasted so good.

After lunch, Nolitha and Mama paddled in the shallow water, jumping over waves and racing them back to shore until Mama said, “Shoo, Nolitha, now I need a rest!” So Nolitha wandered back to the rocks where she stretched out and listened to the lap-lap of a sea lullaby.

A seal broke through the surface of the water. Nolitha was sure it was a seal, she had seen pictures of them. For a moment, its huge sad eyes gazed at her. Then it was gone. Soon though, it re-surfaced and pulled itself up onto a rock. Nolitha sat spellbound . . . it was not a seal now, it was a boy!

The boy came closer, and closer, and carefully placed something in front of Nolitha. Then he turned and made his way back to the water. Hesitantly, Nolitha picked up the thing and turned it over in her hands. It was a mermaid’s purse. It was exquisite!

Nolitha got up to thank the boy. But, before she could do so, he glanced back at her and then dived into the sea. And, as his body hit the water, he was a seal again.

Nolitha gathered all her mermaid’s money into her mermaid’s purse. Then she made her way back to Mama, looking back at the sea every now and again. But she saw no seal, and no boy; only the waves that kept on coming. 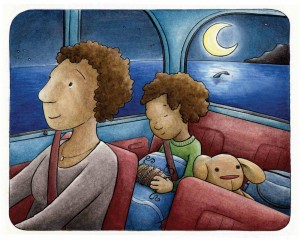 As they journeyed into the night, Nolitha showed Mama the beautiful mermaid’s purse.

And Nolitha told Mama all about the seal-boy who gave it to her.

And then, as Nolitha drifted off to sleep, Mama smiled a faraway smile and whispered, “It was exactly there that I saw one when I was a little girl.”