Mr Hare crept out of his forest home. The morning sky was blue. The grass was green. The trees swayed in the cool breeze. The forest was full of the songs of birds. But…

On his doormat lay something he’d never seen before: a brand new R200 note.

Mr Hare picked it up. “What is Mr Leopard doing here?” He turned it around. “Ah! Mr Mandela,” he cried.

His left ear curled up and down as he thought. He looked up at Miss Secretary Bird, who was watching him from a branch in the thorn tree.

“Please call a meeting of all the animals,” he said. “I have an important announcement to make.”

“What is it this time?” everyone wondered, forming a circle under the tree.

Mr Hare stood in the centre. He cleared his throat and began:

“Fellow citizens of the forest, I have important news for you. This,” he said as he waved the R200 note around, “has landed on my doormat. I don’t know what it is or what it means, but it has Mr Mandela’s face on it and so I’m sure it belongs to him…”

“It has my face on it too,” said Mr Leopard with a playful snarl. “So maybe it belongs to me.”

Everyone laughed except for Mr Hare. He was in no mood for jokes.

“I plan to go to the city this very hour to return this important note to Mr Mandela.”

“What?” Mr Buffalo asked, shocked. “You will get lost there.”

“Why would I get lost?” asked Mr Hare, pushing out his chest.

“It’s true,” Mrs Elephant stomped her foot impatiently. “In the City of Readers almost everyone can read.”

“Well, what could happen to me?” Mr Hare asked.

Mr Lion leapt forward, swishing his whiskers in Mr Hare’s face. “Those who cannot read repeat their mistakes over and over again,” he growled. “And so will you.”

“Hah!” Mr Hare sniggered. “Not me, kitty!” With those words he marched fearlessly right underneath Mrs Elephant. Then he skipped down the path that led to the City of Readers.

Soon he began to hear the noises of the city. And then he saw it. He had never been in the city before.

He glanced at Mr Leopard’s face on the note. It seemed to be warning him not to go.

“But I am the Little Wise One,” Mr Hare said. “I am cleverer by far than anyone in the City of Readers.” And with a leap he entered the city.

The first people he saw were schoolgirls and boys. They looked smart in their blue and yellow uniforms. They carried schoolbags and books.

“Hi there!” Mr Hare called back, proud that they knew him. But he was curious. “How do you know me?” he asked.

“We’ve read about you in our story books,” a girl said. “About how Mr Tortoise tricked you in a race.”

They all laughed. Mr Hare gave them an angry look and went on his way.

He saw people rushing for a train and joined them. At the pay station a man in a smart uniform, standing behind a counter, held out his hand and Mr Hare said, holding up the R200, “I’m on my way to see Mr Mandela.”

The man grabbed the note out of his paw…

Mr Hare examined the note on the train. “It’s turned blue,” he said, puzzled. “And Mr Buffalo has taken Mr Leopard’s place.” He turned the note around. “But Mr Mandela is still here.” He took a carrot out of his pocket and nibbled happily, watching the scenery outside.

Mr Hare looked up at a man in a blue uniform. “You are not allowed to eat on the train. Can’t you read that?” He pointed to a sign above Mr Hare’s ears that read:

PLEASE DO NOT EAT ON THE TRAIN

“Oh,” Mr Hare said, putting the half-eaten carrot back in his pocket.

He got off at the next station and soon found himself on a busy street.

Bra Tsotsi watched Mr Hare trying to cross the road, and saw what he had in his paw.

“One hundred!” he said, licking his lips. He walked up to Mr Hare. “You seem lost, my brother,” he grinned. “I’m Bra Tsotsi, here to help new visitors to our city.”

“Ah,” said Bra Tsotsi. “Mandela is my best friend. I’ll take it to him.” He grabbed the R100 and disappeared into the crowds.

Mr Hare was not happy about how things were going. He wanted to meet Mr Mandela himself and shake his hand. But now, all he could do was turn around and go back home. And what would he tell the animals about meeting Mandela?

“No,” he decided. “I must find Bra Tsotsi and take back the note.”

Quickly Mr Hare weaved through the bustling crowds, leapt over moving cars, and darted in and out of shops.

“And there he is!” Mr Hare spotted Bra Tsotsi in MaPhiri’s Peri-Peri Chicken Shop, chomping away on a R50 box of Wild Wings.

Bra Tsotsi got such a fright that some peri-peri sauce got stuck in his throat, giving him a fit of hiccups.

“Pink?” Mr Hare held up the note, puzzled. “And what happened to Mr Buffalo? But here’s Mr Lion to tell me I need to read to survive in the city! Hah!” He turned it around. “But at least Mr Mandela is still here.”

Mr Hare saw people standing in a taxi queue. Behind them, on the taxi shelter, was a picture of Mr Mandela.

“Ah,” Mr Hare said. “They must all be going to visit Mr Mandela too.” He joined the queue. And when the taxi came he got in.

“Where does Mandela live?” he asked the driver.

“At the end of the long walk to freedom, my friend,” he said with a friendly smile. “I’ll take you there.”

They rode for half an hour, past a school, street hawkers, down a highway, past a church, through a suburb. Finally the driver stopped at a taxi rank.

“Your stop, my friend,” said the driver. “Just walk up this road until you get to a big house with a big gate with a guard outside the gate. That will be R30.” And he took the R50 note out of Mr Hare’s paw.

Mr Hare was about to protest when…

“Your change, sir.” The driver shoved a note in his paw.

Mr Hare looked at the new note. Again it was different to the last one. Instead of Mr Lion, it was Mr Elephant who stared out at him. But when he turned it around there was Mr Mandela, still smiling. Mr Hare smiled back and began to hop up the long road.

On his way he passed a bakery. He stopped, sniffed the air. What was that lovely smell? He pressed his face flat against the bakery window and gazed at doughnuts, pancakes, pies, tarts, fruitcake, biscuits.

Mr Hare hopped into the shop

“Can I help you, sir,” said a lady behind the counter.

“I’d like one of these,” he said, pointing to the doughnuts. “No, no, one of those,” he showed her a slice of milk tart. Then a wedge of chocolate cake, a biscuit, apple crumble, a koeksister.

“Please, sir, you have to make up your mind.”

She slipped the Chelsea bun into a packet and handed it to him. The next thing he knew, Mr Mandela’s brown note was in her hands. And when she put it back in his paw, it was green! And who do you think had taken the place of Mr Elephant? There was Mr Rhino warning him about the City of Readers.

Mr Hare skipped out of the shop, taking big bites out of his Chelsea bun, and wondering, “How many times will Mr Mandela’s note change colour before I meet him?” Then he saw the guard at the big gate. He skipped up to the guard, greeted him and asked:

“I’m Mr Hare of the African bush. I have an important note for him.”

The guard said, “Do you have an appointment?”

The guard turned and spoke into an intercom.

“Sir, I have a Mr Hare from the forest…”

A deep, chuckling voice crackled on the intercom. “Mr Hare! The great Mr Hare of the African forest?”

It was a great meeting. The big hand of Mr Mandela shaking the paw of the famous Mr Hare. The two men entertained each other with stories of the city and the forest, of lions and heroes, of freedom and adventure. 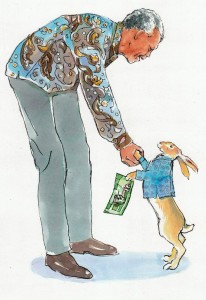 “I found this note on my doorstep,” he said, handing over the R10. “It has changed colour so many times, and the faces of all my big friends from the forest have appeared on it. I knew it was yours so I came to give it to you myself.”

Mr Mandela was puzzled, but he accepted the note with a smile. A photographer came to take pictures of Mr Mandela and Mr Hare. And a TV crew came to film them for News at Six.

When Mr Hare came home he called a meeting. He told all the animals about his exciting adventure. He told them about the people he’d met, the places he’d seen. And how he had finally met Mr Mandela.

“And, my friends,” he said, looking smugly at Lion and Elephant and Buffalo and Leopard and Rhino, “I did all this without being able to read one word.” And with that said, the sun set and all the animals went back to their homes for a good night’s rest.

The next morning, Mr Hare was awakened by a thud on his doorstep.

“What was that?” he wondered. “Maybe it’s the angry stomp of Mrs Elephant coming to argue with me.”

He peeped outside. Mrs Elephant wasn’t there. But there was a big envelope on his mat.

He went out and looked around to see who had brought it. There was no one in sight.

Mr Hare opened the envelope. It was a letter:

The whole country is still talking about your visit. Thank you for telling me all those stories, and for returning the R10 note. I have enclosed a R200 note for you to spend the next time you visit the city.

Because he could not read, Mr Hare was not interested in the letter. But something fell out of the envelope and fluttered onto the mat.

Mr Hare looked down at the R200 note. He could not believe his eyes.

“I don’t believe it!” he cried. “On the very same place as yesterday morning.”

Without wasting time, he called another meeting of all the animals.

“My friends,” he announced, “it’s a great mystery, the note has returned.” He waved it around for all to see.

“And I have to journey back to Mr Mandela to return it to him.”

And, without another word he was away, skipping down the path that led to the City of Readers, the note fluttering in his paw.