Lolo was a clever little girl who lived in the village of the Batswana people. This beautiful village was like no other in the world. The people there were really clever and they were ahead of their time. Lolo was the smartest of them all. In Lolo’s village, the internet was the most important tool. If you visited the village, you’d find school children using their computer tablets to find the information they needed to finish their schoolwork. Many people had cars that could fly and they controlled these cars by using the internet. People used the internet for EVERYTHING!

And then one day – POOF! Suddenly the internet was gone. Everyone thought that maybe it had gone down for a while and that it would work again later, but they were wrong. The king and queen of the village made an announcement on the community radio and television stations. They said that the internet would be down for a long time. Everyone in the village was shocked. Lolo watched in amazement as every child in her school panicked. “Our lives are over!” shouted one of her friends grabbing Lolo by her shoulders. One of Lolo’s teachers ran out of the classroom, grabbed her arm and said, “Do something, Lolo! You are the clever one.” Then the teacher ran off crying. 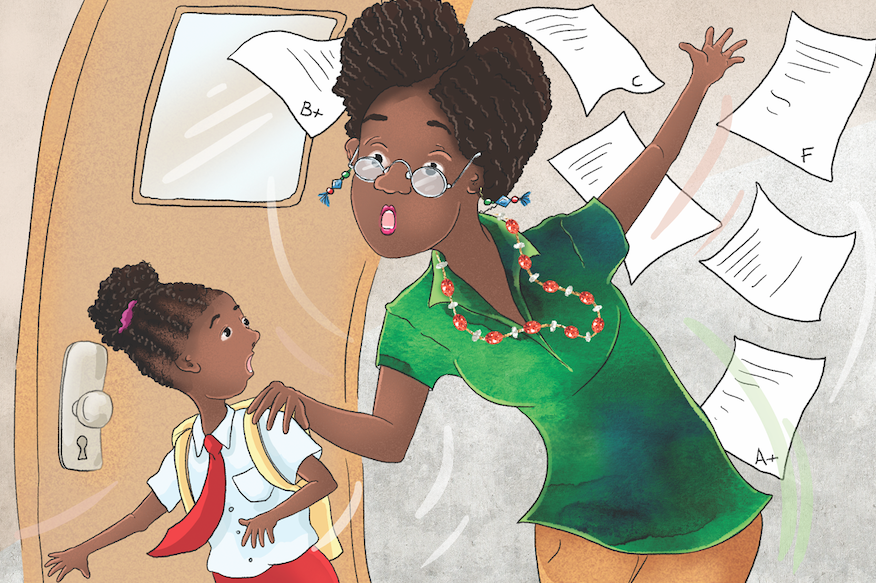 Lolo could not understand what the fuss was about. “Everyone is behaving as if the world is coming to an end!” she thought. She decided that the next day she would pay the king and queen a visit to find out about the problem. When Lolo arrived at the Royal House, she was welcomed with a glass of warm milk and a plate of chocolate chip biscuits. Lolo ate some of the biscuits while she waited for the king and queen. They were the best biscuits she had ever tasted.

The king and queen arrived and greeted Lolo. They began to talk about the problem in the village. The queen explained that their ministers had found out that the problem was with a satellite that was far, far away – all the way up in space!  “So,” said the queen, “it is not just our village, but the whole world that does not have the internet.” The queen then held Lolo’s hand and said, “My child, we are looking for someone really clever to get into the royal spacecraft, travel into space and fix the satellite.”

“Lolo,” said the king, “you are the only person for the job! If you do this, you will be doing the whole world a favour.”

Lolo felt excited and nervous all at the same time. She had read that going into space was a dangerous thing to do, but she agreed to go.

For days, the little girl worked alongside the space crew to prepare for this special mission. She learnt how to fly and control the spacecraft and she learnt how to float in space. Soon Lolo was ready to fly off into space. On the day that Lolo left, everyone was there to watch. People threw flowers at her for good luck. Others sang songs of encouragement. Lolo felt so loved. 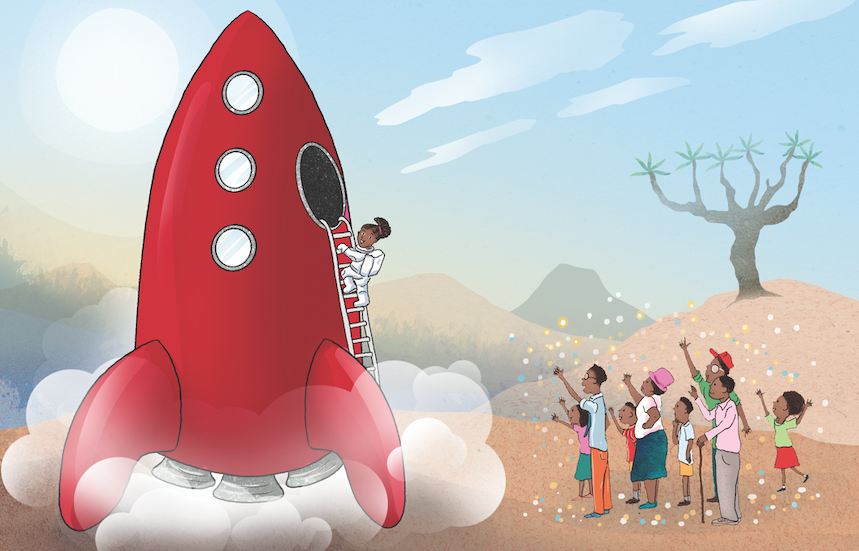 Lolo climbed into the spacecraft and all the technicians turned the engines on. Moments later, the spacecraft left earth. After flying for what seemed like a long, long time, the spacecraft landed at the space station. Lolo could see the satellite from the window. She contacted the king and queen using a special type of radio to let them know that she had arrived safely. Everyone at home celebrated and her parents were especially happy to know that their daughter was alive and well.

But the mission didn’t go quite as planned. For days Lolo struggled to work out what the problem was. She knew that the success of the mission was in her hands and she didn’t want to let everyone down. Eventually the space team’s food and water began to run out. The mission had become very difficult, but still the clever little girl kept working and working, until one day … she had worked it all out! One of the cables on the satellite had burnt out and needed to be replaced. Once Lolo had done that, the internet was back! Everyone in her village and all over the world celebrated.  After a hard, but successful mission, Lolo returned home. She was a hero! The king and queen were so proud of her that they gave her a medal of honour and named their next child after her.