Mandla was out walking one day when he saw Elephant splashing himself in the river. Elephant looked very happy. His big ears flapped and he sprayed water high into the air using his long trunk. 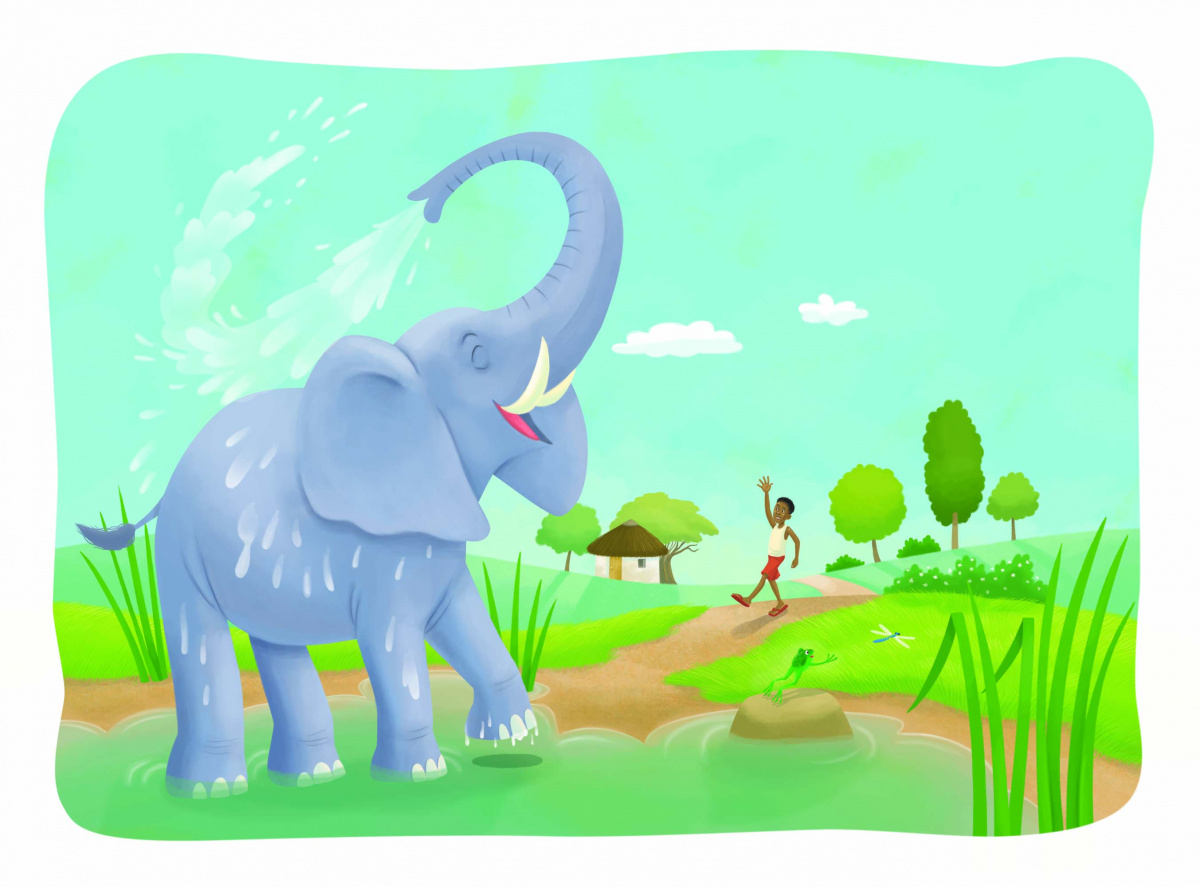 Elephant looked down at Mandla and lifted his trunk.

“That trunk of yours is amazing,” said Mandla.

“Oh, this?” Elephant looked at his trunk. “I suppose it is, isn’t it?” “It must be nice to spray yourself on a hot day,” said Mandla. “Oh, that’s not all I can do,” said Elephant. “I can also use my trunk to pick fruit from the trees and pull down branches. I can even use it to make a big noise if I want to. We call that trumpeting! Here let me show you.”

Elephant stretched out his trunk. Brrrrpprumph! The most marvellous, loud noise came out. It thundered through the forest and some birds flew away from a nearby tree. Mandla danced on the spot and laughed.

Mandla left Elephant playing in the river and went on through the forest. He held his arm up in front of his nose, bent his arm and curled his hand so that it looked as if he had an elephant’s trunk. Then he tried to pick a bunch of berries from a bush. But he was not looking where he was going and … THUMP! He bumped into something.

The thing he had bumped into was brown and orange. It seemed to reach from the sandy ground all the way up through the trees.

“What’s happening down there?” said a voice from high above.

A great big head on the end of the long neck came down through the trees.

“Hello, Giraffe, I am sorry I bumped into you. I was pretending to have a trunk like Elephant and I wasn’t looking where I was going.”

“Elephant’s trunk is marvellous,” said Mandla. “He can spray himself with water and pick fruit from the trees and make a great big noise.”

“Well,” said Giraffe, “that’s quite clever I suppose, but I can do much more with this long neck of mine.”

“I can reach the very tops of the trees, where the leaves are the juiciest. I can also see all around and look out for danger. My tongue is very special too,” said Giraffe. “It is very long.” Giraffe stuck out his long purple tongue. “And it’s very thick too, which means I can eat from trees even if they have thorns. Trees with thorns have the best leaves, you know,” said Giraffe.

“That’s great,” said Mandla. “I wish I was tall like you, Giraffe, then I could see over the trees and eat those leaves you keep talking about.”

So Mandla went on through the forest, holding both arms above his head like a long giraffe neck and picking at the leaves on the trees.

“What are you doing?” asked a very quiet voice.

Mandla jumped back in fright.

“I didn’t mean to scare you,” said the quiet voice. A small, grey buck with a white ring on her bottom, crept from the forest.

“Waterbuck!” said Mandla. “You must be the quietest of all the animals.” 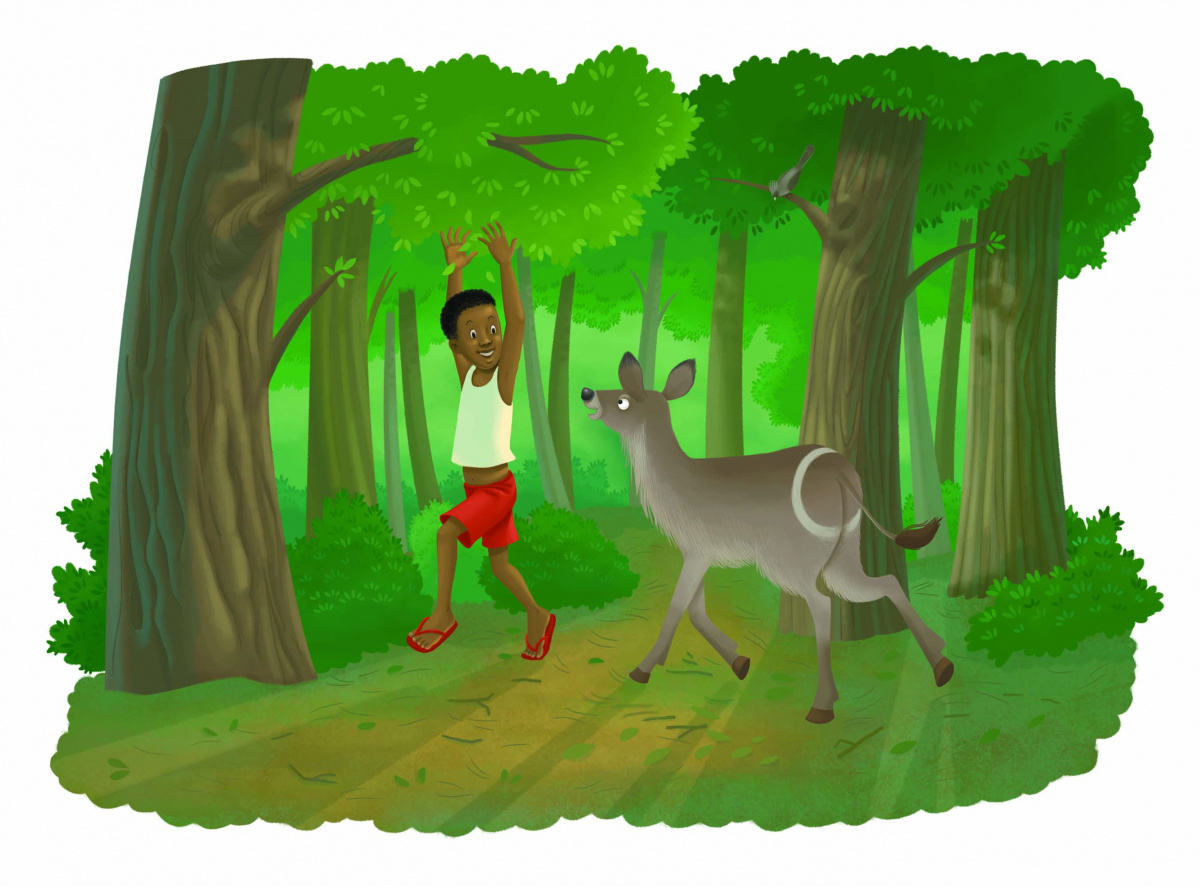 Waterbuck blushed. “You are kind, Mandla. Being quiet helps keep me safe. I don’t like all those noisy animals.”

“It’s a very good trick, being so quiet,” said Mandla. “I wish I could creep around like you do, Waterbuck.”

“You should try it sometime! It takes lots of practice to get as good as me though. See you around, Mandla,” said Waterbuck, slipping back into the forest.

So Mandla went slowly through the forest, walking on his tiptoes like Waterbuck. It wasn’t long before he tripped over a small branch and fell into a pile of leaves. There was a quiet laugh from the forest and Mandla saw a flash of grey as Waterbuck moved away into the bushes. Mandla picked himself up and ran through the forest back to his house in the clearing. His mother was outside hanging up the washing.

“What’s wrong, Mandla?” asked his mother. “Why do you look so unhappy?”

“Mama, how come I don’t have a trunk like Elephant? Why don’t I have a long neck like Giraffe? And why can’t I creep around like Waterbuck? They are so special and I don’t feel very special at all.”

His mother bent down and kissed him on the forehead.

“Mandla, if you had a trunk like Elephant, I would not be able to kiss you goodnight. And if you had Giraffe’s long neck, I could not pick you up in my arms and swing you about. And just think, if you were as quiet as Waterbuck, I could not find you to give you a hug.”

Mandla’s mother pulled him close. “Everyone has something special. I love you just the way you are. And to me, you are more special than all the animals in the forest,” she said.

Spend some time discussing with your children what makes them special. (Don’t forget to ask them why they think they’re special!) Then suggest that they draw pictures of themselves and complete the sentence, “I am special because …” under their picture.