Once upon a time a man was walking home after he had been travelling in different parts of Africa for many years. He was thin and hungry, and his money was gone. “I’m so tired,” he said to himself as he trudged along the road. “I wish I was home in a soft bed, with a tummy full of warm food.”

At last he came to a village. “Ah, here are some houses,” he said to himself. “Some kind person will give me a warm meal, I’m sure.” He knocked on this door and that door, but the answer was always the same:

“Go and get a job. I’m not giving you anything.”

The poor man was very sad. He sat by the side of the road and sank his head into his hands. “What am I going to do?” he thought. “If I don’t get food soon I will starve to death.” He watched the people walking by on the road. “They are all going home to warm meals,” he thought. “I wish I was one of them.” 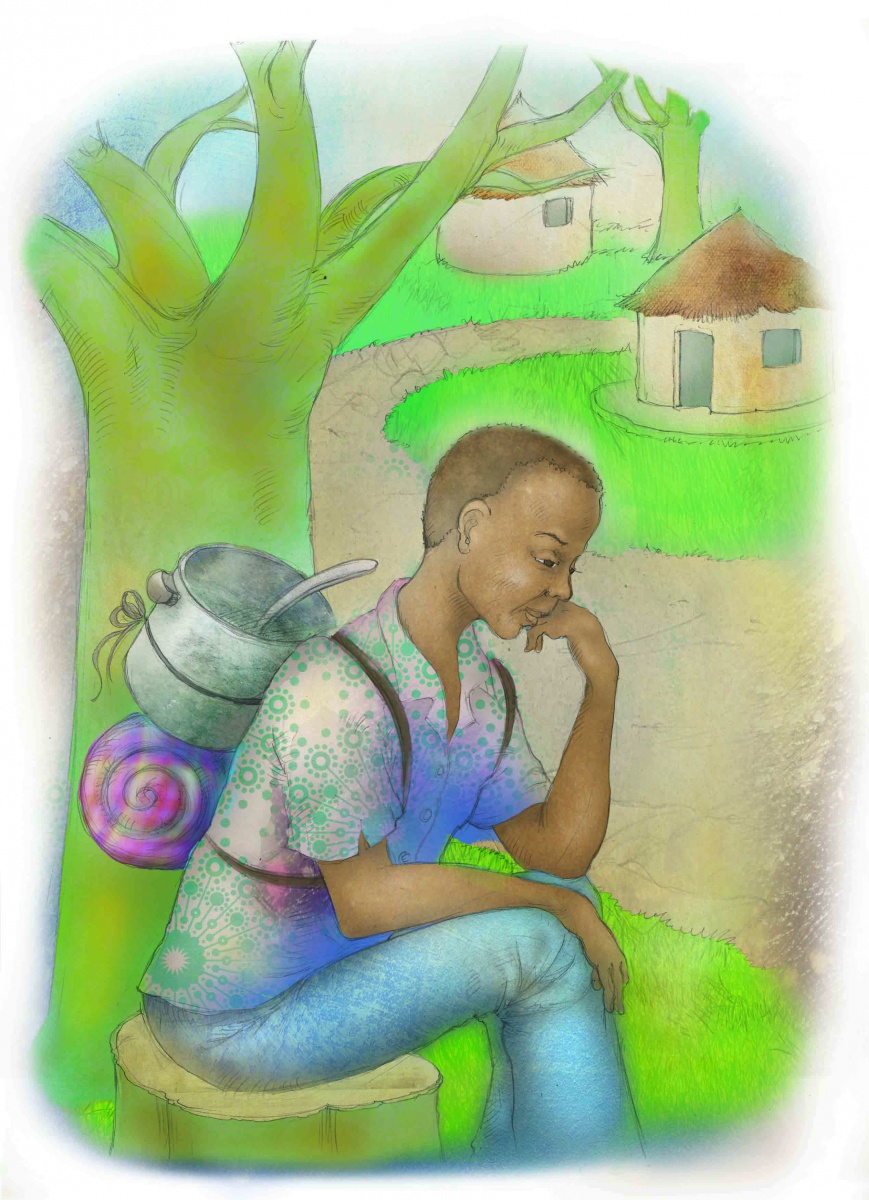 Then he had a bright idea. He made a fire and set up his cooking pot over it. He filled the pot with water and soon the water was boiling away.

Two women came past on their way home from the market. “What are you making?” they asked.

“Stone soup?” said one of the women. “I’ve never heard of that before.”

“What are you going to put in it?” asked the other woman.

“I will show you right now,” said the man. He dug into his pocket and pulled out a smooth round stone. “I’ll put this into the pot. It is the magic ingredient. It’s such a pity that I don’t have an onion and a couple of carrots. If I had those it would be the best soup ever.”

The man put the onion and the carrots into his pot and closed the lid. A few minutes later the man tasted the stone soup. “Yum, yum, yum!” he exclaimed. “What delicious soup! I have never tasted anything as wonderful anywhere. Not even in Malawi, where some of the best soups are made.”

“Please give me a taste,” one of the women begged.

Her friend pushed her aside. “Me first,” she said.

So the man poured some stone soup into a cup and the women tasted it. Then they smacked their lips.

“That is marvellous,” the women said. “You are the best cook ever.” But they were curious. “What exactly did you put in the soup?” they asked.

Then the man saw a young boy carrying a basket of morogo. He waited until the boy was close to him. He took his spoon and tasted the soup again.

“What delicious soup,” he said loudly so that the boy would hear him. “I have never tasted anything as wonderful anywhere. Not even in Malawi, where some of the best soups are made. All I need to make it perfect, is a bunch of morogo.”

The young boy stopped. “I’ll give you the morogo you need,” he said. “Then will you let me taste your soup?” he asked.

“Yes, I will,” said the man. He dropped the morogo into the pot and stirred. Then he put a little bit of soup into a cup and handed it to the boy. “You’ll taste the magic ingredient, of course,” he said. “Isn’t it wonderful?”

“Delicious,” the young boy said. “I’m going to tell everyone to come and taste it.”

Soon there was a queue of villagers waiting to taste the stone soup. But, before the man gave anyone a taste, he asked the villagers to give him a sweet potato, a meaty bone and a pinch of salt and pepper. He added all these to the soup. The mixture bubbled away, getting thicker and tastier by the minute.

More people joined the queue. Everyone wanted to add something to the soup. And the more things the people added, the better the soup tasted, and the longer it lasted. 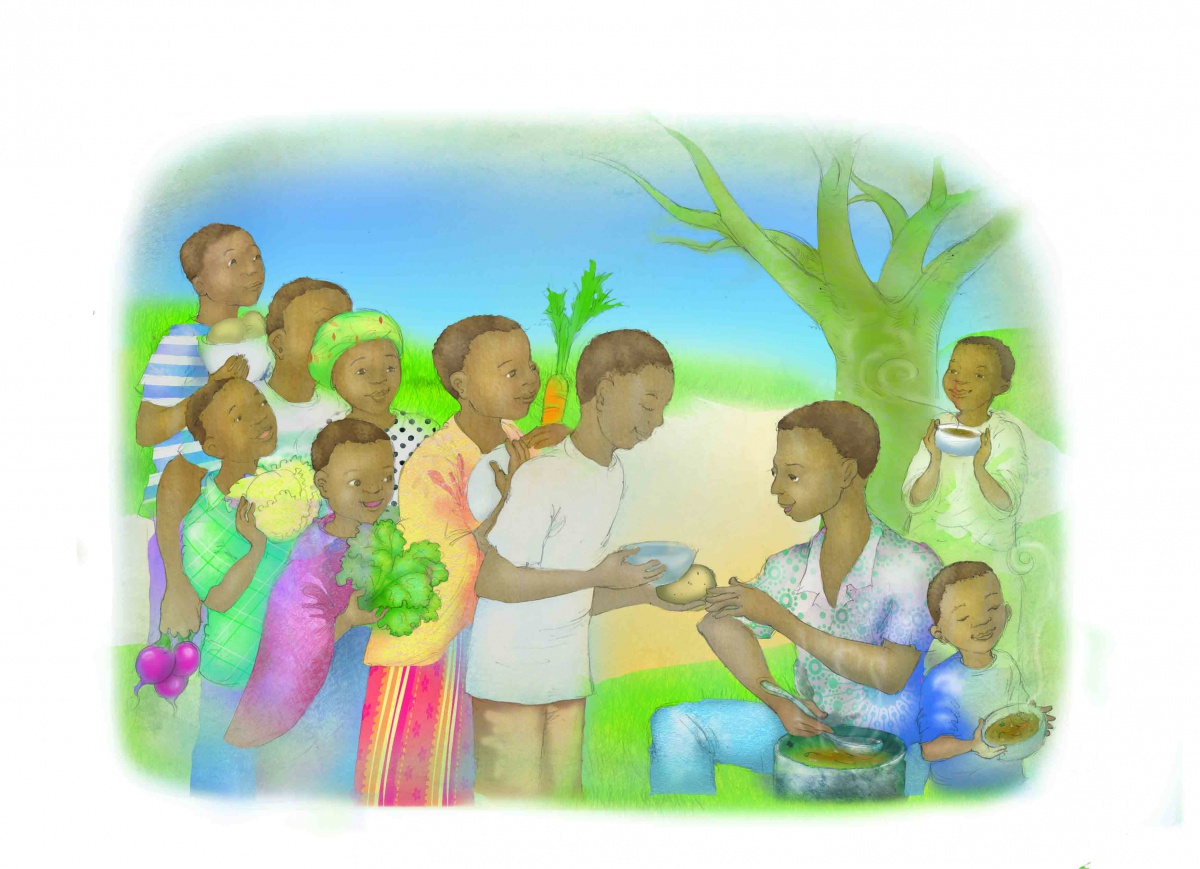 By nightfall everyone had eaten their fill and the pot was empty. Everyone was smiling and happy. “This man is a master chef,” they said. “He must have learnt to cook at a king’s palace in Malawi.”

“That is the best soup I’ve ever tasted,” the mayor told the man. “Come and sleep at my house tonight, in a soft bed with a warm blanket. In the morning you can teach my cook how to make your soup.”

The man smiled as he washed out his empty pot. It really had been the best soup ever, and it had not cost him a cent. Then the man put the stone into his pocket, picked up his pot and off he went to the mayor’s house for a good night’s sleep.