Squirrel and the sun

One morning, when the animals woke up, they were surprised to see that there was no sign of the sun rising in the eastern sky.

“What’s going on?” all the small animals asked their parents.

“Just be patient!” said their mothers and fathers. “The sun must be feeling lazy today. Soon it will rise as usual, and we can go down to the waterhole for a drink.”

But the animals were wrong. Though they waited and waited, the world stayed dark. After several hours, they decided to have a meeting to discuss the problem.

“What shall we do?” asked Hippopotamus.

“It’s very simple,” said Giraffe. “We all need to look for the sun. We can’t live without light!”

The other animals agreed, so off they all went in many different directions, determined to find the sun. 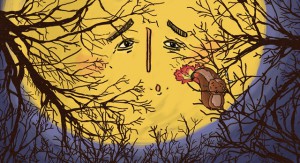 “I’ll start by looking in the trees in the big forest,” said Squirrel to herself. She explored every tree where she scampered and played each day. At first, she found nothing but darkness. As she got deeper and deeper into the forest, she noticed a very pale glow far ahead of her. “There it is!” she said excitedly. “I knew I would find the sun here!” Squirrel was right. After travelling for another hour, she finally found the sun, tangled up in the dense branches of a tall tree. “Don’t worry, Sun!” said Squirrel. “I may be small, but my teeth are very sharp! I’ll gnaw off these branches and set you free in no time.”

“Thank you, Squirrel,” groaned the sun. “I’ve been battling to get out of this tree for hours, but the more I struggle, the more tangled up I become.”

So the little squirrel began to nibble and gnaw at the branches. It was hard work, but she didn’t give up. After half an hour, she had freed the sun a little; and after another hour, there were only a few small branches and twigs still holding the sun in the top of the tree. But now the squirrel had a problem − the more branches she gnawed away, the hotter the sun burnt. Squirrel began to sweat. Soon she smelled her fur singeing and smoking. Her mouth was so dry that she could hardly speak. “I’m sorry, Sun, but I can’t carry on,” she croaked. “Your heat is just too strong for me! Look, my tail is burning!”

The sun was desperate to get free. “Please carry on, Squirrel!” Sun said. “I need to get out of this tree so I can light up the world each day. All the animals and birds and plants need my light and warmth to live.”

Squirrel knew that this was true. So although her beautiful brown fur had turned black, and her tail had burnt right off, she carried on chewing her way through the branches that were trapping the sun.

More time passed. By now Squirrel had nearly freed the sun, but her eyes were hurting so terribly that she had to close them. Again, she felt she just couldn’t carry on. “Please, Sun,” she said, “I really need to stop now. My eyes are damaged and I need to rest them.” But again the sun begged her to carry on, and so she did.

At last she chewed away the last scraps of bark and wood that were holding the sun back. Slowly, the sun glided up into the sky, and as it did, so dawn spread a pink glow across the world. As the sun rose, it spoke to the squirrel. “Thank you so much, little friend!” Sun said. “You have worked hard to save me, and by doing so you have also saved all the animals and birds and plants. What can I do for you in return?”

Squirrel thought for a few moments. She had always wanted to fly. “Give me wings,” she said, “so I can fly high in the sky.”

“All right,” said the sun, “you now have a pair of wings, and you will be able to fly even faster and further than the birds. Because you have hurt your eyes by helping me, you will sleep in the day and wake at night. Although your eyes can’t cope with the light any more, you’ll be able to see and hear really well at night!” 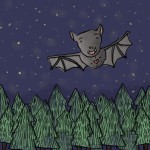 And that is how the squirrel became a bat. She was too busy swooping around at night to miss her tail and her brown fur and her life as a squirrel in the treetops. And even though she could no longer enjoy the sun’s light, she still felt its warmth in her heart.