King of the birds

Long ago when the world was new, Nkwazi, the great fish eagle, called all the birds together.

“As you know,” he said, “Bhubesi the lion is king of the beasts. But why should he speak for us birds? We need to chose our own king … and as I am so majestic, I say it should be me!”

All the birds began to chirp and chatter until one voice rose above the others. “Nkwazi, you are majestic, it’s true,” said the giant eagle owl, Khova. “But my huge eyes see everything that happens. This makes me very wise – and a king really needs wisdom!”

Again the birds twittered loudly, until the kori bustard, Ngqithi spoke. “I think I should be king!” he said. “Kings need to be big and strong, and I am the largest bird of all.” 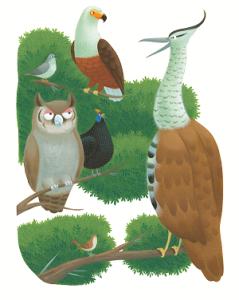 The birds began arguing about who should be king. Then a shrill voice suddenly rose above the din, “Excuse me! Excuse me!” It was tiny Ncede, the Neddicky bird. Although the crowd laughed at his cheekiness, they allowed him to speak – but none of them could believe it when he said that HE should be king!

“And what exactly would make you a good king?” asked Nkwazi, after they had all stopped laughing.

“Nothing really,” said Ncede, “but I should have as much chance as anyone else!” 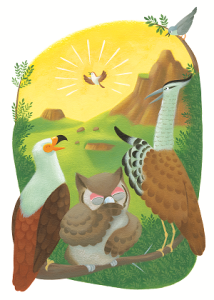 “All right,” said Nkwazi, “let’s have a competition!” All the birds liked this idea. They agreed that on the first day after the full moon, when the sun touched the tip of the highest mountain peak, they would all take to the air to see who could fly the highest. The winner would become their king.

The big day arrived. The birds watched patiently as the sun rose. Though little Ncede was determined to prove he could be king, he knew his wings were too weak to fly very high.

So, just before the birds took off, he crept silently underneath Nkwazi’s wing feathers. The fish eagle was so busy watching the sun that he didn’t feel a thing.

The instant the sun touched the tip of the mountain, the birds rose high into the sky. Soon most of them grew tired, and only the fish eagle, the owl and the bustard were left in the race.

Khova was the first to drop out. As he sank to the earth, Nkwazi and Ngqithi flew up higher and higher … but after five minutes, the heavy bustard could go no further. “Ah, Nkwazi,” he called sadly as he swooped to the ground, “you win!” 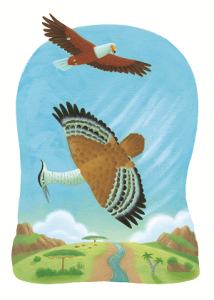 “WHEEE-WHEEE-WHEEE!” shrieked the fish eagle triumphantly, gathering his last drop of strength and climbing a little higher. But suddenly he heard a taunting voice. “Not so fast, Nkwazi!” chirped Ncede, shooting out from under his wing and rising a little above him. “You haven’t won yet!” Poor fish eagle! He was utterly exhausted, and could climb no further. With a groan he fell to the earth.

The birds were furious at Ncede’s trickery. As he hit the ground, they rushed angrily at him – but before they could act, the quick little bird zipped into a deserted snake hole.

“Come out!” screeched the birds, “and get the prize you deserve!” But although they guarded the hole all night, Ncede stayed exactly where he was. 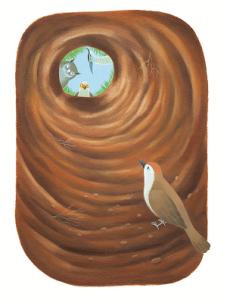 “Let’s take turns to stand guard!” said Nkwazi in the morning. Khova agreed to take the first watch while the others went off to sleep or hunt. He waited for ages, but there was no sign of Ncede. “My eyes are so strong,” he said to himself, “I only need one. I’ll close my right eye and use my left.” A while later he swapped, opening his right eye and closing his left. This went on for some time, until finally he forgot to keep one of his eyes open and fell fast asleep. 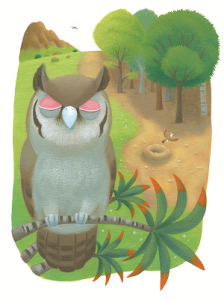 This was just what Ncede had been waiting for! Off he flew, straight into the forest. “You fool!” shouted Nkwazi, who had seen Ncede disappearing just as he came to relieve Khova, “YOU FELL ASLEEP!”
Khova was so embarrassed that he decided to hunt by night and sleep by day so that the other birds wouldn’t have a chance to tease him. Meanwhile, Ncede flitters about in the forest, never stopping long enough to be caught. And who became king? Well, the truth is that the birds were so upset with Ncede that they never chose a king!