How the ostrich got a long neck

Mr Ostrich was kind and gentle and he loved Mrs Ostrich very much. He always helped her with the things she had to do.

One day, Mrs Ostrich laid seven eggs in her nest in a hollow in the ground. She fluffed her feathers and sat on her eggs to keep them warm. For days and days she sat there looking after the eggs.

“Dear Mrs Ostrich,” said her husband one evening, “you have been sitting on our eggs for so many days. My black feathers are as dark as the night. I will not be seen in the darkness, so I will look after our eggs at night. I will keep them warm for you. Now you will have some time to yourself. You can enjoy yourself until the sun comes up in the morning.”

Mrs Ostrich was so happy. She wanted to stretch her legs. She stood up and Mr Ostrich sat down clumsily to cover the eggs. Mrs Ostrich fluffed up her feathers to show how happy she was. Then she left to dance in the fields that were around their nest.

Mr and Mrs Ostrich had chosen the place for their nest very carefully. They knew that in this spot it would be difficult to see Mrs Ostrich as she sat on the nest during the day. You see, in those days ostriches had short necks like a guinea-fowl. So, from a little way away, when her head was down, the ostrich mother looked like a bump on the ground. They had chosen this field, which had short grass, because long ago they had learnt that in long grass they could be attacked before they even knew there was any danger. Because they had chosen carefully, they were able to see everything.

Mr and Mrs Ostrich also knew how to keep their eggs safe from the fires that sometimes burnt across the fields. They had carefully scratched away the grass so that there was a big circle of dusty sand around their nest. Mr and Mrs Ostrich were very happy with their lovely, safe nest and their seven eggs.

But now that Mr Ostrich was sitting on the eggs at night, there was one thing that made him worry. His wife was too happy when she was out in the fields. She danced around with her feathers flying, and it didn’t look like she was alone.

“What is she doing?” Mr Ostrich thought. She should not be dancing around like that. She is a mother now and she has eggs to look after. But like a good father he wiggled his body on the ground to cover the eggs and keep them warm. Then he settled down for a long night’s wait while his wife was playing in the fields.

One night, the silvery moonlight made strange shadows on the field. The shadows seemed to be dancing. Mr Ostrich was getting very sleepy. His eyes were starting to close when he heard his wife’s laugh. He was wide awake the moment he heard it. He looked up. 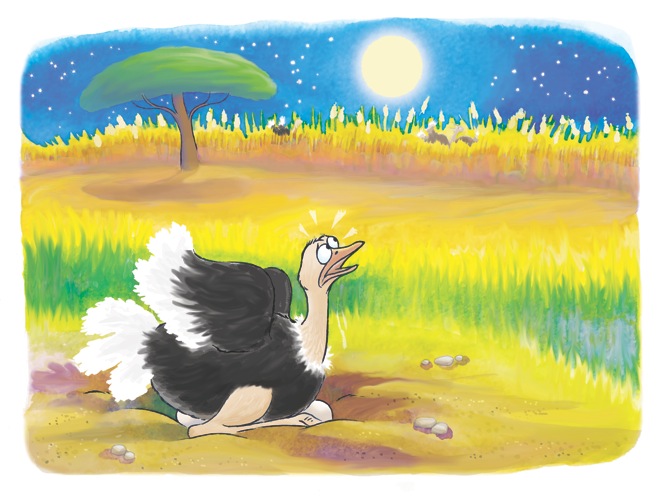 At first he could not see anything. He stretched his short neck as far as it would go and then he saw her. Mrs Ostrich was dancing through the grass, between the bushes playing a game of hide-and-seek with a handsome young ostrich. When she hid behind a bush, she stretched her neck as far as she could to make sure that her husband was still sitting on their eggs.

Mr Ostrich was angry. He got up from the nest to see what was going on, but then he sat down again. He could not leave the eggs. What if they got cold while he was gone? So he spread his feathers over the eggs and just stretched his neck further and further trying to see what his wife was doing.

At last, the long, long night came to an end as the sun rose. As it did, Mr Ostrich could see his wife coming back to sit on the eggs for the day. He tried to get up, but he felt very stiff. The muscles in his neck were hurting.

At last he stood up. He was just about to tell his wife how angry he was, when he looked down at his feet. They looked so far away from his head. Suddenly he knew what had happened – during that long night he had stretched his neck further and further and further.

He shook his head. He stamped his feet, but no matter what he did his neck stayed long. Nothing that he did would change it. And his wife? She had a long neck too! She also tried to shake her head and stamp her feet, but it did not help. She had stretched and stretched her neck to see if her husband was still sitting on their eggs!

And that is how it happened that Mr and Mrs Ostrich got long necks! And that is why from that night until today every ostrich you see has a long neck too.