Once upon a time there was a very poor man called Mzi.

“The children are hungry, and we have no money to buy food,” cried his wife, Pumla. “What are we going to do?”

“I will go hunting,” said Mzi. “If I can catch some guinea fowl, then we will have a tasty meal.” Off he set into the veld with his catapult and some small stones. Soon he came across a fat guinea fowl in a clearing in the long grass. Mzi took careful aim and was about to fire the catapult when …

“Please don’t shoot,” squawked the guinea fowl. “I am a special bird. I can make you rich.”

Mzi put down the catapult. “What do you mean?” he asked. “Can you really make me rich?”

“I lay golden eggs,” said the guinea fowl. “If you promise not to kill me, I will lay an egg for you.”

Mzi scooped up the bird and hurried home.

“Ah, dinner,” exclaimed Pumla when he got home. “Kill the bird so I can put it in the pot.”

“Oh no,” said Mzi. “This isn’t just any bird. This is a magic guinea fowl that lays golden eggs.”

“You shouldn’t believe everything you hear,” laughed his wife. “Pass me the axe. I’ll kill it myself.”

The poor bird got a terrible fright. It clucked so hard that it laid an egg, right there on the doorstep! Pumla looked at the egg and blinked. She rubbed her eyes and looked again. The egg was definitely golden! 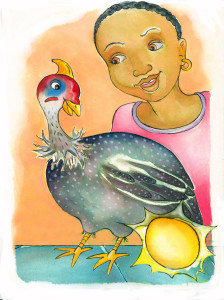 Carefully Mzi picked it up. “It’s very heavy,” he said. “It must be pure gold.”

“We are rich!” shouted Mzi.

“Can I go now?” asked the guinea fowl.

“Of course not,” snapped Pumla, snatching the bird up and putting it in a cage. “You must stay here and lay more eggs.”

Then Pumla and Mzi went off to the gold merchant. They sold the egg for lots of money – enough to buy food for a year and a new dress for Pumla. Mzi was very happy. His children had food, his wife had a new dress and he had a magic guinea fowl that laid golden eggs.

Every morning after that the family found a golden egg in the cage. Soon they had everything their hearts desired: a new house, a shiny black car, a big screen TV, and lots of lovely clothes to wear. Every night they feasted on the best food, and everyone in their town envied them.

“I can only lay one egg per day,” squawked the bird.

“But I need a bigger house,” Pumla said. “I want a better car – a red one this time, and I want to travel around the world, and …”

“I want more,” said Pumla. “I want two eggs every day. I want to be the richest person in the whole country.”

“You have to,” said Pumla, waving the axe. The guinea fowl was so scared its legs wobbled and then … it pushed and strained and squawked and squeaked and … out popped another egg! Every day it managed to squeeze out two eggs.

A few weeks later Pumla was dissatisfied again. “I want three eggs a day,” she said. “I want to be the richest person in the whole of Africa.”

“Try harder!” shrieked Pumla. “Give me three eggs right this minute, or I will chop off your head!”

“One more,” shouted Pumla, “or I will chop you into little bits!” 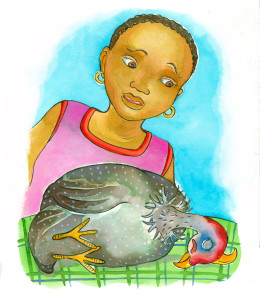 “Let’s cut it open,” cried Pumla. “It must be full of eggs.” She grabbed a knife and cut open the guinea fowl’s stomach. But, there were no eggs inside, and they never found a golden egg again.