A gold star and a kiss for Thoko

Friday was always the big day of the “Star Awards”.

So far, Thoko had earned a yellow star for her maths sums, a red star for her neat writing and a blue star for “clean hands”. Green stars were for helping Mrs McKensie carry her big bag from her car to the classroom. You got a gold star for reading. Gold stars rocked! 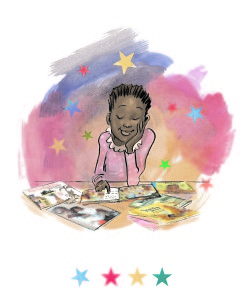 Stars were always awarded just before the school bell rang and everyone rushed out to meet their mums, dads, grannies or aunts in the playground. Everyone, except Thoko, who lived close by and could walk home. Thoko lived with her mama at the back of her Gogo’s dressmaking shop.

Friday was also great because Thoko got money to buy a treat on her way home. And this Friday was an extra lucky Friday because Thoko reached the car park just in time to help Mrs McKensie carry her big bag to the classroom. Maybe she’d win a green star. A gold star for reading would be better, of course.

Lately, Thoko had made a special effort with her reading – to read with expression, to pause after a comma and to stop at a full stop to catch her breath. The best reader was Brendan, who the children called “Greedy Eyes” because he devoured so many books.

Thoko helped Mrs McKensie hand out worksheets. Friday’s worksheet was all about time − and it was going far too slowly for Thoko. If only she could make all the hands on the drawn clocks spin and stop at Star Awards Time! During music, she couldn’t wait for the last line of a new song to end. Waiting for the Star Awards was painful.

The final period of the school day was a free one, so Thoko decided to read. And while she read, she forgot all about time − first one book, then another and another. By the time she had added the titles to her reading list, Mrs McKensie was ready to announce the star winners.

Shane, Rhapelang, Corne and Taitum all got yellow stars. Gift, Gaswin, Aydon, Chleo and Kay-Lee got red stars. Roche, Shaunique and Miscka got green stars. And Dana Rose, who had managed to wash green glitter off her fingers during break, received a blue star. Then Thoko heard her name called.

“Thoko and Brendan,” announced Mrs McKensie, looking through the reading lists. Brendan had read five books and Thoko had read six! She felt like melting with happiness as Mrs McKensie placed a gold star on her forehead.

“Clang-a-lang!” went the school bell and Thoko raced through the school gates. She couldn’t wait to show Mama and Gogo her gold star. When she reached Mrs Ismail’s spicy doughnut stand, her face was hot from running. Mrs Ismail’s little daughter, Sharifa, was pretending to be a shopkeeper. She handed Thoko a spicy doughnut in a paper bag and smiled sweetly. “Thank you,” said Thoko and sped off.

“Mama! Gogo!” she called, bursting through the front door, “Look what I got?”

Gogo looked up from her sewing and Mama peeped around a corner.

“Look!” said Thoko. Mama and Gogo looked while Thoko pointed to her forehead.

“Look at what, Thoko?” asked Gogo.

“This one,” said Thoko, running a finger across her forehead. But all she felt was smooth skin! The gold star was gone! Thoko burst into tears as she explained how she had received a gold star for reading.

“Where did you have it last?” asked Mama.

“And what did you do after school?” asked Gogo. In tears, Thoko went over her route from school.

“Well, it’s only a paper star,” said Mama. But it wasn’t. It was a very special gold star.

“Dry your tears and we’ll go and look for your gold star,” said Gogo.

Gogo helped Thoko retrace her steps around the corner and along the road back to school. And there at Mrs Ismail’s doughnut stand they found Thoko’s gold star − stuck to the forehead of Mrs Ismail’s little girl! When Mrs Ismail heard Thoko’s sad story, she said, “Sharifa darling, that gold star you picked up belongs to Thoko.”  But little Sharifa had fallen in love with Thoko’s gold star. And when Mrs Ismail tried to remove it, she screamed so loudly that passers-by thought she was being murdered.

Gogo turned to Thoko. “Sharifa’s too small to understand what is fair. But you are old enough to be thoughtful. Let her keep your gold star,” she said. Thoko thought for a while. The corners of the gold star had curled up, and it looked as if it was about to fall off again. “Okay,” said Thoko, “Sharifa can keep it.” But inside, she still felt sad. Gold stars were not that easy to win. 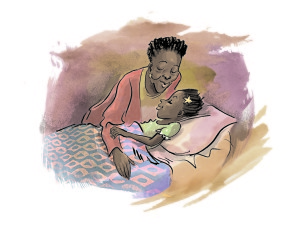 Then at bedtime, Gogo brought Thoko something special she had made – a glittery gold star on a hairclip. “That’s for being such a good reader,” said Gogo. Then she kissed Thoko on the forehead and whispered, “And that’s for being such a kind, thoughtful girl.” Thoko touched her forehead and thought a little more as she drifted off to sleep: “Gold stars get curly corners and fall off. Kisses last forever!”