Why children’s invented spellings are not just cute 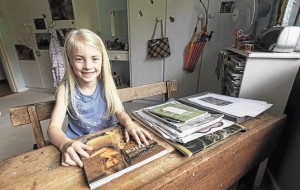 Have you wondered why there is so little continuity between learning in the foundation phase and the wonderfully rich invention that characteris es learning in the preschool years? Well, there is no abrupt turnaround in how young children learn just because they move into a school system. The enormous learning strides that children make before Grade 1 should continue by leaps and bounds.

Having some insight about early literacy development as a holistic learning process will enable parents to actively improve their child's linguistic ability.

Seven-year-old Tessa Harrison (see her original post for Nal'ibali here) shows that children are meaning-makers and need to be in control of their own learning.

We can create conditions that allow them the freedom to make the "mistakes" they need to make in order to learn and develop. A good example of this is allowing children the space to invent the spelling of words they want to use to express something they want to say.

What does Tessa's spelling tell us about her development as a young writer?

Are her spelling attempts simply "cute" and nothing more?

Or do they suggest she has a strong sense of herself as a writer, and knows that writing is about self-expression and communication?

At this stage, the correct spelling is not as important as communicating her ideas. Her proudly stated "not halpt" suggests her independent effort is valued and probably praised.

Adults who are curious about understanding the writing process and helping children learn to write have much to learn from Tessa's note. It's obvious she appreciates the power of writing to communicate - but do we adults appreciate that being empowered to invent your own spelling to express yourself is a hugely significant part of learning to write?

Mothers know how babies, even when they can only babble, use that babble to communicate something that is important to them. As they develop, children learn from listening and observation, they learn to speak from hearing us speak, and pick all sorts of subtle verbal cues.

None of us would have learned to speak if there were no people speaking around us and to us. Speech is learnt in a social environment, and it's the same with writing.

Children become motivated to write once they understand the reasons for writing, the purpose writing serves.

Tessa has internalised and begun to use the language typically used in stories.

A phrase like "and in no time", for example, is not one we generally use in ordinary conversation. This shows she is beginning to understand quite complex concepts.

Though her spelling is unconventional, we can quite easily get the meaning of what she is writing.

She already understands a lot of English phonetics - no mean feet, or is it feat?

Children should be given room to explore a language creatively even as they learn the mechanical skill of spelling correctly.

This seemingly small adaptation into what is sometimes called "emergent writing" would be a giant step forward in developing literacy in South Africa.

Currently, many children's early writing tends to consist either of copied text or of dull, low-level sentences, which is what children produce when they are restricted to using words that they have learned to spell. The joy and hard work of composition is denied them until they can write and spell.

But Tessa's writing, along with many other examples, in English and African languages, shows us that children learn to write by writing.

What is needed most for children to become good readers and writers is also made clear in Tessa' s writing: lots and lots of enjoyable and fulfilling encounters with interesting stories and books and an adult who gives them access to stories and books and is prepared to read their favourites to them again and again.

A really good start is a really early one, being read to as Tessa says "evan sans I wos 1".

Carole Bloch is the Director of PRAESA, an initiating partner of the Nal’ibali Reading-for-Enjoyment initiative. She has a PhD in early literacy in African settings from the Carl Ozietsky University, Oldenburg and has served as an early literacy consultant in several African countries. The main thrust of her work is to transform the way children learn to read and write, by helping to create conditions that put stories, meaning making and enjoyment at the centre of literacy and biliteracy learning.