Nal'ibali's Storyplay Co-ordinator, Nadia Lubowski, travelled to KwaZulu-Natal to train and support ECD practitioners in their implementation of the Storyplay approach. In this piece, she relays her personal and professional experience in helping spread the power of stories:

We had been driving since 7am, we had visited six early childhood development (ECD) sites by mid-afternoon. My thoughts were meandering between endless questions and absorbing and experiencing the unfamiliarity of the environment. We were trying to find the seventh site when we drove past this little guy. He was sitting on a rock, a couple of metres away from his house, next to the road. He was deep in thought and did not notice the car drive past.

I captured the moment as “he is living the dream, his dream”; it made me ponder how wonderful this was. We continued on our journey, we visited a few more sites, yet I continued thinking about this “moment” we had observed.

I had been travelling with Gcinumuzi (our Nal’ibali Literacy Mentor in KwaZulu-Natal) and Sphindile from Network Action Group to visit the ECD practitioners we had trained in April in Umzinto on how to use the Nal’ibali Storyplay approach. On this trip, we were visiting the participants at their sites, in their own environments, to support them in their implementation of the approach.

We managed to visit 11 sites. We travelled 776 kilometres in one and a half days. We had meetings with social workers from Umzumbe and Vulamehlo, and saw two district municipalities in KwaZulu-Natal. We were warmly welcomed and led read-aloud demonstrations and “magic carpet” stories (both of which form part of our Storyplay approach).

I could write an endless account of what we saw and tell numerous stories about our experiences… But the experience that repeatedly comes to mind is that of the little guy in the helmet enacting his dream. He had been so intensely absorbed in the moment and deeply wrapped up in his thinking. There were other children a few metres away… Were they also interested in the play of this boy? Did they also wonder about the scenarios, plots and characters unfolding in his head? Considering this, I can perhaps use this little guy to illustrate the world of a child – and the reason we use Storyplay as an approach to collaborative learning.

Storyplay is an approach to help young children grow as confident, imaginative and curious learners. Children love to play. Play is a child's way of processing their thoughts and making sense of their ‘world’.

Storyplay offers exposure to books, toys and other resources and brings the adult and child together. These objects become a method to animate story and provide a literacy-rich, meaningful learning experience. By engaging in Storyplay, children can become the characters or advise or solve problems on behalf of one or more of the story characters. They become independent explorers, investigators, scientists, artists, builders, readers, writers, storytellers and actors. One of the objectives of Storyplay is to incorporate observations as part of a teachers’ role. Observing the children in their care and listening to their play. It is also about the adult wondering how they might better understand the child through emergent, active and responsive listening. As teachers observe children learning through play, they are able to observe skills and interests that may otherwise remain hidden. 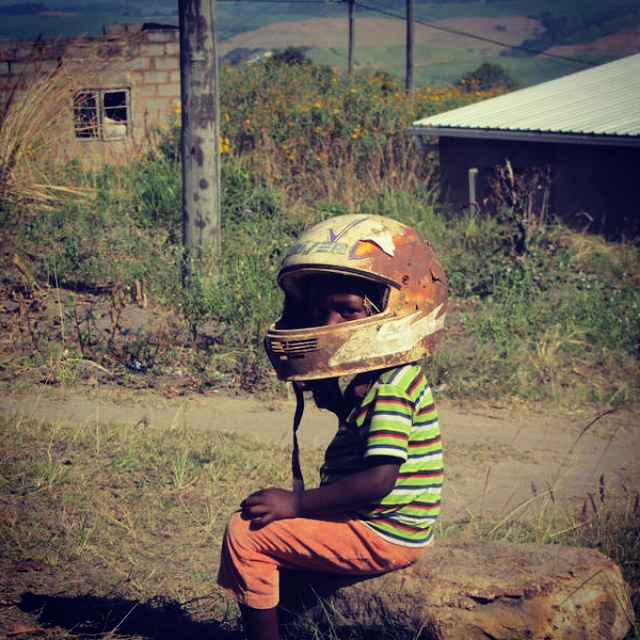 My assumption is that the “little helmet guy” was playing. He was imagining something, and if he had an opportunity to voice his thoughts, I am convinced his words would have been stories about motorbikes, cars or racing. With sensitive direction and facilitation, one could encourage and motivate him to engage in mechanics, stories about motorbikes, or racing drivers. We can help by creating an environment where he can look at books, draw pictures, tell stories, act and play these stories, and later instill an interest in learning to read and write about motorbikes. His interest can be used to meaningfully engage him in various types of activities that lead to emergent reading and writing. His learning process would have developed from a genuine interest and grown into making meaning that is relevant to him. We glimpsed a moment of his world, and this is a privilege.

We are presented with endless moments such as this one in our ECD settings. We simply need to be prepared to listen, be present and allow the child to have a voice. All moments for children are learning opportunities. Why not transcend their stories into learning realms that originated from their play?

There was once a child who lived with his mother in a house. He went to visit his friend in another house. They played by the tree. Then he went back home. His mother was angry. He went to sleep. He woke up and watched cartoons on the t.v. The end.

Once upon a time there was a big river, child, and another child. They lived in a house this big (indicating with his hands, stretching them). The house was white. The children went and played by the river. Then they went back to the house and talked. The end.

These are stories grounded in familiar landscapes, as the children visit these places through “magic carpet” and Storyplay. Doing these activities with children we send the message that their stories are valued and share their progression over time. And for now my thoughts remain with our “little helmet guy”. I wonder how he would start his story?