As parents and caregivers, we all dream of success for our children - and storytelling and reading provides one of the ways to help fulfill these dreams. Explore our reading and storytelling section for articles and ideas to encourage a love of reading in your child, and to help keep them hooked!

How children learn to read and write 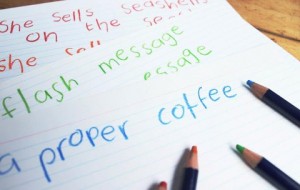 When adults write, we do so for a real reason: to write a shopping list, to leave a note for someone, to fill in forms, to communicate with a friend in a letter or email, to create a story. Children learn to write most easily when they write forreal reasons too rather than because an adult has told them what they should write about.

Like all other things worth learning how to do, learning to write is a process. We can help our children develop their skills at writing by understanding where they are in their development and encouraging them.

Drawing as a first step

When children realise that writing communicates meaning, they begin to experiment with it. They use writing for different real purposes in their lives. Most commonly they:

When children first start to write they usually use scribbles on a page. From here children often begin to use symbols that look more like letters and then they start to use real letters (even though they may be back to front sometimes!) together with their own symbols. These are exciting first steps because they show that children are aware of a difference between drawing and writing.  You can support their attempts at writing by asking them what the writing says.

Next children start writing in words, using the letters of conventional writing. They usually choose letters that they think match the sounds in words they are trying to write. Through experimenting, they gradually become more aware of how we write from the top of the page to the bottom, and from left to right and also how numbers are different to letters.

Encourage children’s writing by reading it aloud or asking them to do so, displaying it around your home (for example, on the fridge) and by writing back to them!

Over time, as children are exposed to examples of writing in their environment and in books you read with them, they gradually incorporate the use of punctuation in their writing and use conventional spelling more and more. They even begin to pick up ‘mistakes’ in their own writing and rewrite words or letters. While they start out writing mainly to record and communicate messages, if you keep reading with them, you will find they begin to write their own simple stories!

What could possibly happen when a starving cow is left alone with three fluffy little chicks? And what would happen when the cow comes home and finds a big pile of hay? What if she ate and ate and ate …

By signing up with the Nal'ibali network you are showing your support for using the power of stories to inspire children to want to read and write. You will also receive a monthly eNewsletter and stand the chance to receive other great benefits.