The giraffe and the fox

Once upon a time there was a giraffe and a bat-eared fox who were very good friends. They were both very good at stealing and spent a lot of time together getting up to no good.

One day Fox was feeling hungry. “Come, my friend,” he said to Giraffe. “Let’s cross the river and steal some food from the farm over there.”

“Great idea!” said the giraffe, licking his lips. “I feel like a tasty watermelon.”

The giraffe and the fox crossed the river. The fox held tightly to the giraffe’s long neck because he could not swim.

On the other side of the river, the clever fox made a hole in the farmer’s fence with his sharp teeth. Then the fox and the giraffe squeezed quietly through the fence to steal food on the other side. The fox stole five eggs from the hen coop and the giraffe chewed through a patch of lettuce. The giraffe was just starting on a juicy watermelon when the fox lifted his nose to the sky and gave a howl. 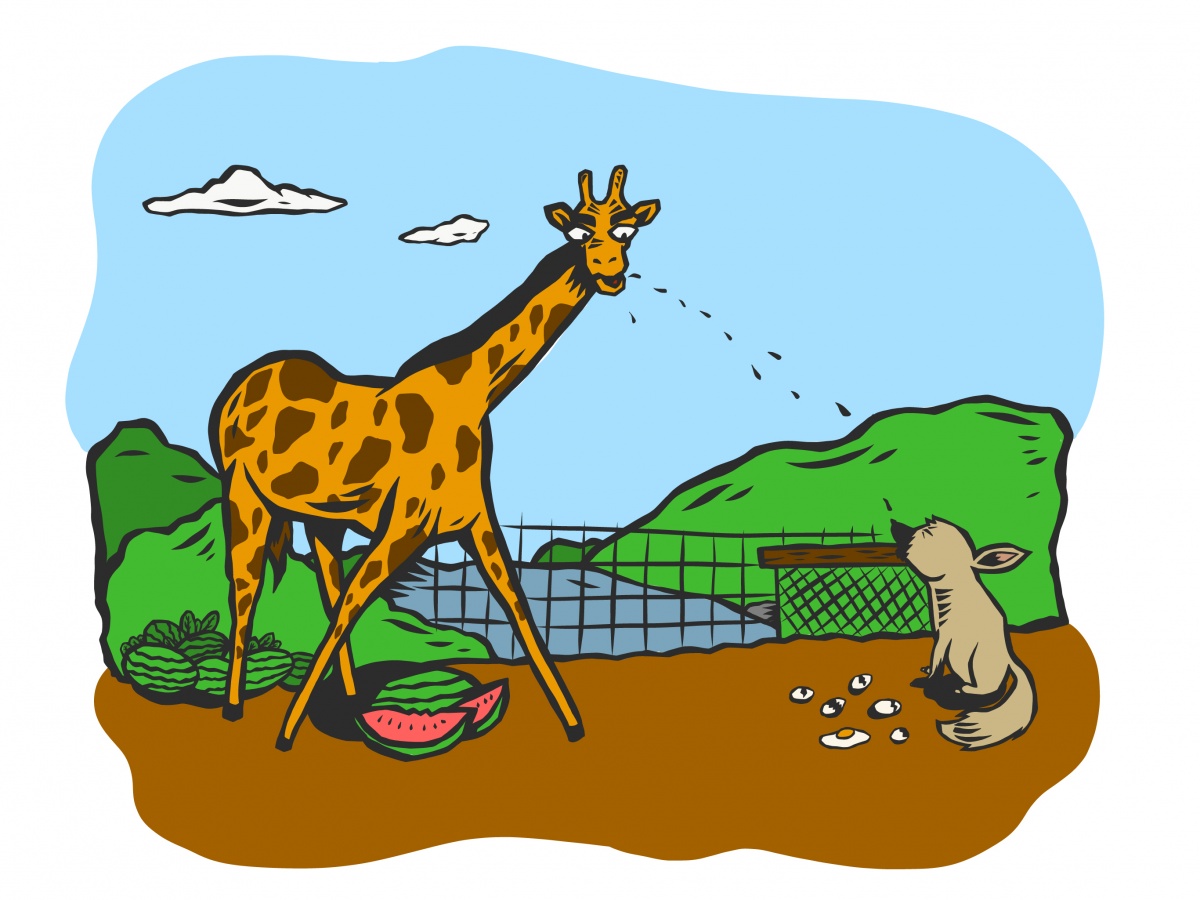 “Shhhhh,” hissed the giraffe spitting bits of watermelon all over the fox.

“What do you mean, ‘shhhhh’?” asked the fox wiping his whiskers. “I always sing when I have finished my food. It’s my custom.”

“Well, wait for me to finish my watermelon,” crunched the giraffe. “Otherwise the farmer is going to hear you and come and chase us away.”

The fox was tired of waiting. He lifted his nose to the sky again and started to sing, “Owoooooooo!”

The farmer was having his lunch when he heard the fox howling. He ran outside with his big stick. The fox saw him coming and, being very quick, he dashed through the hole in the fence and was gone before the farmer even saw him.

The poor giraffe, on the other hand, was standing with his front legs wide apart trying to enjoy the last of his watermelon. When he saw the farmer coming, he tried to stand up and run away, but his legs became tangled and he fell over.

“Never, never steal from me again!” shouted the farmer, beating the giraffe with his stick.

When the giraffe eventually escaped, he was bruised all over his body and furious with the fox. He limped over to the river where the fox was snoozing under a bush.

“Some friend you are!” shouted the giraffe, waking the fox. “Thanks to your singing I have been beaten black and blue.”

“Don’t be angry,” said the fox. “I told you I always sing once I have finished my food. Now let’s cross the river and go back home.”

The fox held onto the giraffe’s neck and the giraffe swam out into the river. When the giraffe reached the deepest part of the river, he said to the fox, “I am going to take a bath now. I feel all hot and bothered after that beating.”

“You can’t!” said the fox, staring at the giraffe with bulging eyes. “If you go under the water, I will drown! I cannot swim!”

“But I must bath,” said the giraffe. “It’s my custom.” With that, the giraffe ducked under the water. The fox sputtered and thrashed his paws.

The giraffe was cross about his beating, but he felt terrible watching the fox splash around in the water. The fox was his friend after all. The giraffe put his head under the water and used it to lift the fox back onto his neck. The fox coughed and choked and held on to the giraffe for dear life.

When they reached the other side of the river, the fox thought about what he had done to his friend. “Giraffe?” he said quietly.

“I’m sorry for treating you badly. I see that what you did to me was because of the bad way that I treated you earlier,” said Fox.

Giraffe nodded. “It was,” he said. “I was paying you back for what you did to me.” 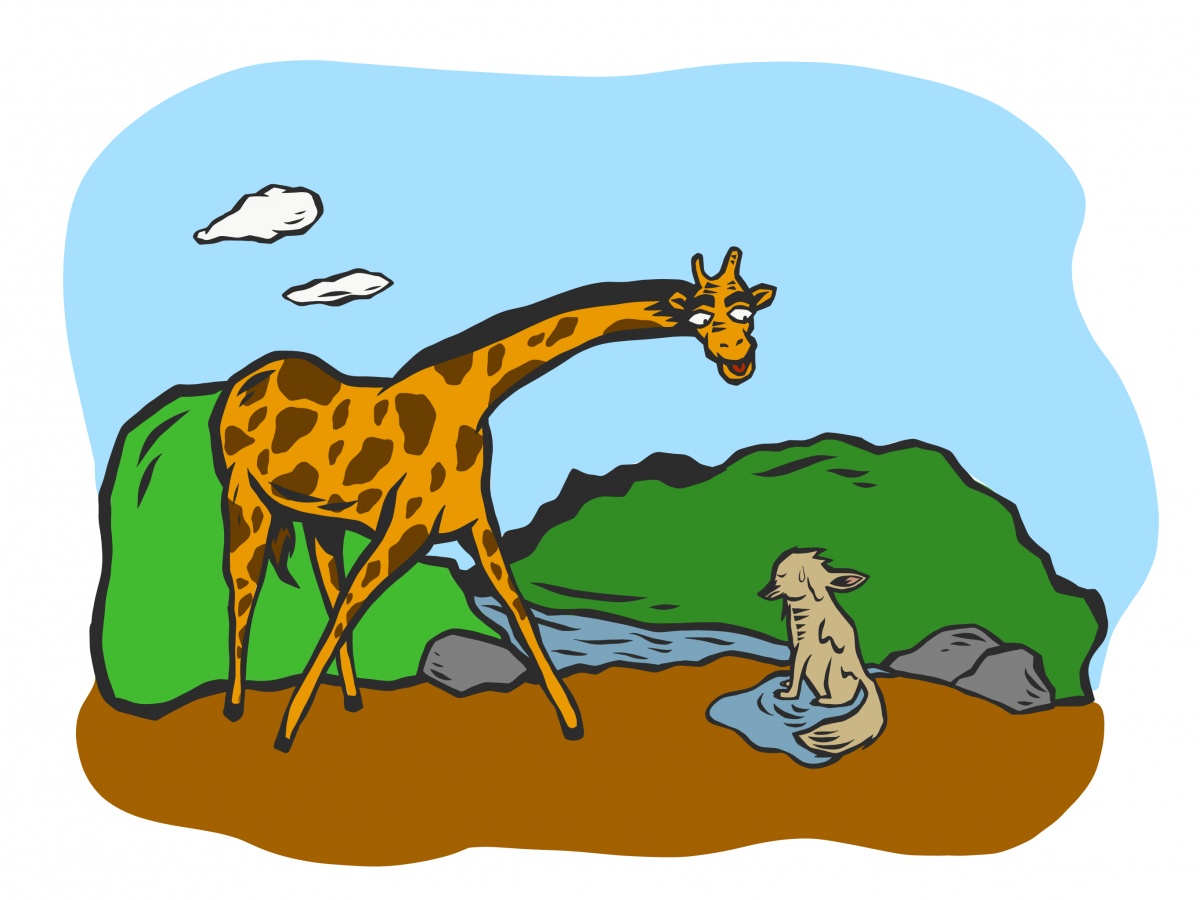 So, the fox and the giraffe had learnt that it is important to treat others the way we want to be treated, and from that day on, they always did so. And, to this day, they are still the best of friends.

After you have read The giraffe and the fox, talk to your children about how they like to be treated by their friends and then use their suggestions to write a list together called, 10 ways to be a good friend.